NETIZEN GETS MESSAGES FROM 3 GIRLS ASKING FOR SEX @ 355 SEMBAWANG 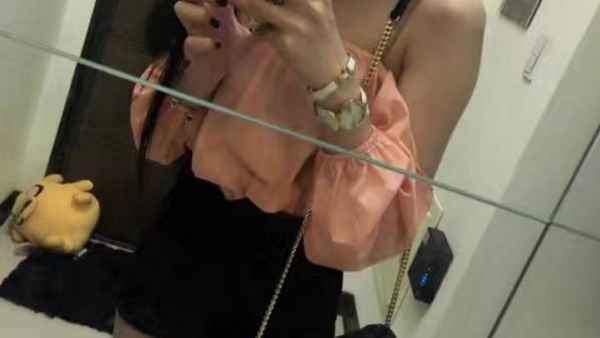 I don't know if I'm considered lucky or suay, I just receive 3 messages from 3 different girls while looking through my WeChat at Sembawang Sun Plaza. All three of them are pretty young PRC girls, very presentable wearing branded goods in their profile pictures. They are asking me for a quick time. The damage is $100/XXX/XXXXX.

END_OF_DOCUMENT_TOKEN_TO_BE_REPLACED

SEX SCAM ON THE RISE, 53 CASES ALONE IN THE FIRST TWO WEEKS OF MARCH 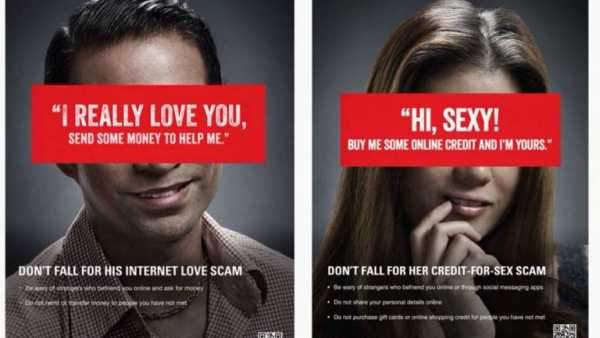 Police said that victims are usually men, and the online platforms involved are WeChat, Locanto and OkCupid. Scammers would usually engage their victims via phone calls and online messaging. The victims are usually told to buy gift cards or online shopping credits such as iTunes or Alipay Purchase Cards before they can meet up or date the scammer. What makes the victims desperate to meet the scammer? Usually, sexual favours are dangled to the victim to entice them.

END_OF_DOCUMENT_TOKEN_TO_BE_REPLACED 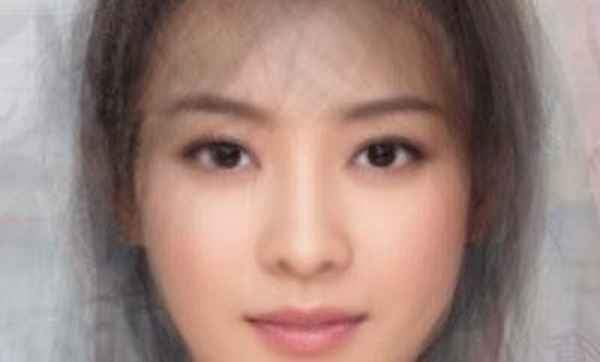 It’s howdeepisyourlove127 story telling time! I know it’s been a long wait just like DIN TAI FENG endless que, don worry I’m back BITACHES with another one of my exp.

END_OF_DOCUMENT_TOKEN_TO_BE_REPLACED Between January and April 2016, the Police have received about 30 reports from members of public who were introduced to foreign investment opportunities through social media platforms such as Wechat, LINE and Facebook. Most victims received unsolicited messages from persons claiming to be stock brokers, employees of banks or financial companies who introduced them to investment packages that promised returns of 10 to 50 times the amount invested. The victims were asked to provide their personal particulars, such as NRIC and passport number, to fill up the investment form. They then transferred monies to banks in Hong Kong and China, and had to pay administrative fees, security fees and taxes to receive the profits and returns. Some victims also received phone calls from persons claiming to be from the Hong Kong Monetary Authority or Hong Kong Overseas Control Centre asking them for a deposit before their profits could be released.

END_OF_DOCUMENT_TOKEN_TO_BE_REPLACED

FOREIGN PERVERT HARASSES LOCAL GIRL, ASKS HER “HOW MUCH 1 NIGHT?” 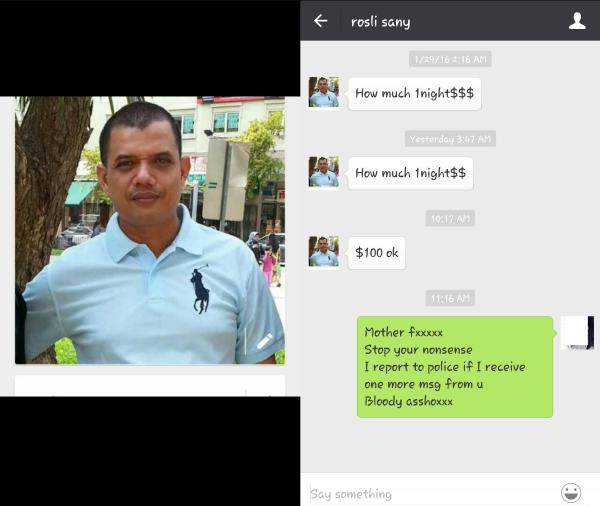 One of our female readers has sent in yet more evidence of foreigners misbehaving in Singapore. According to our reader, she received a message from a "rosli sany", who simply blurted out a disgusting proposition: "how much 1night$$$?" Feeling outraged and on the advice of her friend, she decided to shame this pervert and warn other women about this pervert lurking on WeChat.

END_OF_DOCUMENT_TOKEN_TO_BE_REPLACED 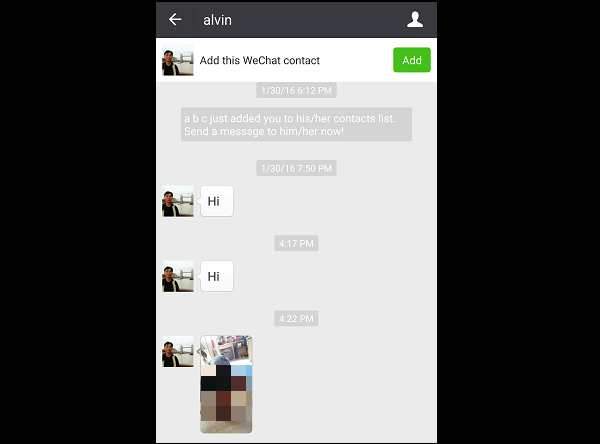 I would like to share this in order to allow the community to avoid sick psychos like this man. So this man by the name of "alvin", wechat ID of "a b c" decided to send me a dick pic despite being ignored for the past messages.

END_OF_DOCUMENT_TOKEN_TO_BE_REPLACED

HELP! I THINK MY FATHER IS HAVING AN AFFAIR 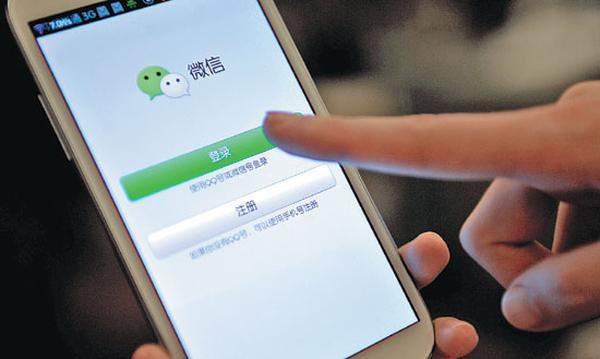 A few months ago, he started telling our mother to buy him more colourful clothes. All he ever wore was black and blue. He also started to criticise my mother's dressing. He also started to be very active on WeChat. My mother realised that he was constantly chatting with this PRC lady. He said that this PRC lady was a friend of a friend. She "very poor thing", working overseas to support her daughter. There are days when my father comes home looking happier than usual. Some days, he is grumpy. My mother looked thru his phone and realised that he always calls her before he reaches home and he texts her goodnight, with the rose and heart emoticons. Usually, when he is grumpy, it means that the lady didn't contact him.

END_OF_DOCUMENT_TOKEN_TO_BE_REPLACED

I came across this on wechat. Why on earth got such a culture going on ah?? I censor away the website url on the pic, the website still nicely done up with ordering form(used panties) and fetish services provided. Apparently there are sickos that engaged her services to lick and nibble on her toes with FRs included somemore!

END_OF_DOCUMENT_TOKEN_TO_BE_REPLACED 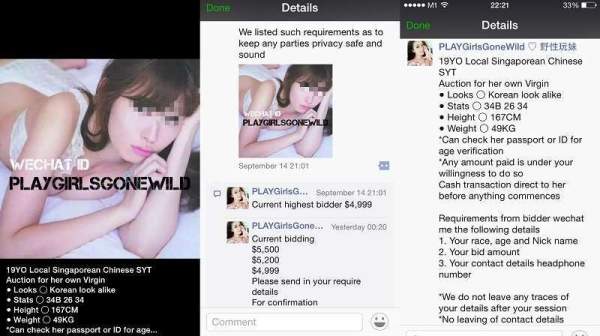 I came across this on a popular Wechat escort/prostitute agency/site. It looks pretty official & serious. This local sweet young thing is auctioning her virginity to the highest buyer.

END_OF_DOCUMENT_TOKEN_TO_BE_REPLACED 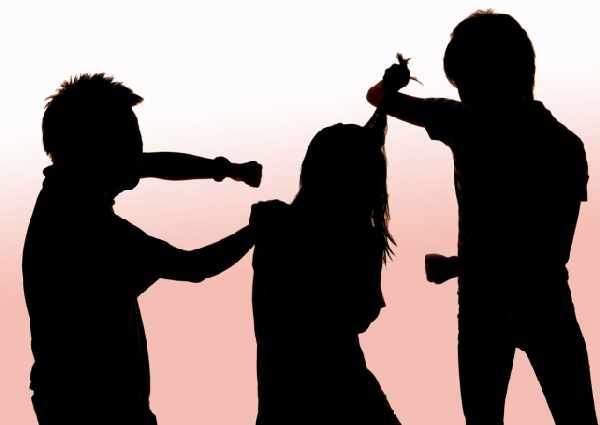 The China Press reported that a 15 year old girl was gang-raped by two men whom she had befriended on WeChat in Kuala Lumpur. The incident occurred on Sunday at around 11pm. The victim turned up at the house of her WeChat "friends" and was slapped and dragged into one of the rooms.