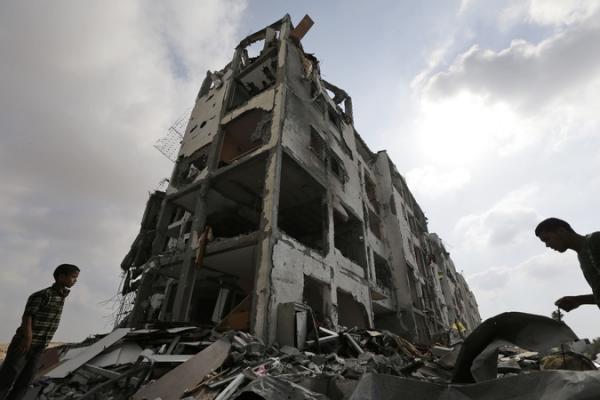 A senior Palestinian official told the AFP on Tuesday that an elusive long-term truce agreement has been reached between Israel and Palestinians after nearly two months of fighting. A source told The Jerusalem Post that Palestinian Authority President Mahmoud Abbas will announce the details of Egyptian-led cease fire agreement this evening.The cease fire was finalized after 48 hours of talks between representatives from Qatar, Egypt, Gaza, and the West Bank, Al Jazeera America reported on Tuesday.

END_OF_DOCUMENT_TOKEN_TO_BE_REPLACED

Israel and Hamas said they have agreed a new 72-hour truce starting on Tuesday (August 5), after increasingly vocal world demands for a ceasefire in the bloody Gaza conflict. The apparent breakthrough came during talks in Cairo on Monday, only days after a similar three-day truce collapsed in a deadly wave of violence within hours of starting on Friday. Images of the bloodshed - which has cost more than 1,800 Palestinian lives, and 64 Israeli soldiers in and near Gaza and three civilians in Israel - have sent tensions in the region soaring, earning the Jewish state strong criticism.

END_OF_DOCUMENT_TOKEN_TO_BE_REPLACED

Israel's security cabinet on Tuesday accepted an Egyptian ceasefire proposal, a government spokesman said, after a week of the deadliest violence in and around Gaza in years. "The cabinet has decided to accept the Egyptian initiative for a ceasefire starting 9am today," Ofir Gendelman, spokesman for Prime Minister Benjamin Netanyahu, said on Twitter.