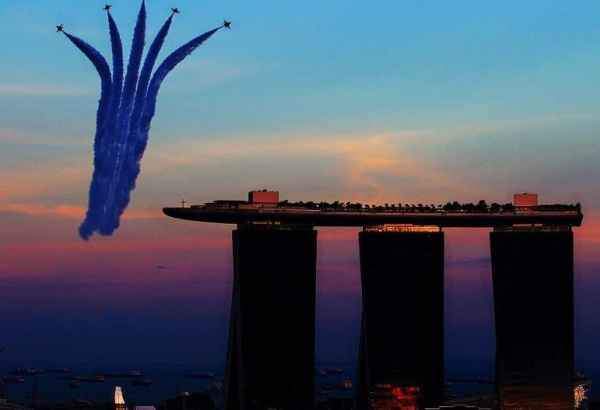 20 fighter jets flew past Marina South on Thursday in the shape of the number "50" in celebration of the golden jubilee in relations between Singapore and Indonesia.

END_OF_DOCUMENT_TOKEN_TO_BE_REPLACED

Indonesian Military (TNI) Commander Gen. Moeldoko rebuffed Singaporean media reports on his lavish watch collection and claimed that he only purchased knockoff watches to satisfy his curiosity about watch technology. “In the market, this watch could fetch for more than Rp 1 billion [US$85,984], but I bought it for only Rp 5 million,” Moeldoko said after a meeting with the Philippines’ armed forces chief, Gen. Emmanuel T. Bautista, in Jakarta on Wednesday. Moeldoko was responding to foreign media reports about his penchant for collecting expensive watches. One of the watches was a limited edition Richard Mille he wore during an interview with a Singaporean news channel.

END_OF_DOCUMENT_TOKEN_TO_BE_REPLACED

Indonesian Warship Naming Row: Why Usman and Harun are not heroes

Nationalism is legitimate and peoples are fully entitled to resist foreign colonial rule. In contrast, the threat or use of force against the territorial integrity or political independence of any state is a violation of international law, prohibited under Article 2(4) of the Charter. Konfrontasi was an entirely unprovoked attack against the territorial integrity of Singapore that had nothing to do with self-defence.

END_OF_DOCUMENT_TOKEN_TO_BE_REPLACED

Indonesia's Armed Forces Commander, General Moeldoko, said it was incorrectly reported that he had made an apology over the naming of a navy frigate after two Indonesian marines behind a 1965 bombing in Singapore. Dr Moeldoko told reporters on Thursday that his comments, in an interview with Singapore broadcaster Channel NewsAsia aired on Tuesday, were misunderstood. "Saying sorry that the naming of the Usman Harun is our final decision, does not mean saying sorry. If things are twisted, that's normal for reporters," he said.

END_OF_DOCUMENT_TOKEN_TO_BE_REPLACED

The Commander-in-Chief of the Indonesian Armed Forces has apologised over the naming of an Indonesian warship after two marines who carried out the bombing of MacDonald House in Singapore in 1965. General Moeldoko told Channel NewsAsia that the Indonesian military had meant no ill-will, and had not intended to stir up emotions in Singapore. He said the episode has been a learning process, and he is confident that future ties between the two militaries would grow even stronger. General Moeldoko said: "Once again I apologise. We have no ill intent whatsoever to stir emotions. Not at all. Second, relations between the two countries are on the mend. There have been communications among leaders. Singapore's Chief of Defence and I have spoken."

END_OF_DOCUMENT_TOKEN_TO_BE_REPLACED

Not business as usual for Indonesia-Singapore defence relations

Or it may have been staged because Indonesia’s Korps Marinir (Marine Corps) has absolutely no other national heroes in its long history. Whatever the case, Indonesia’s decision to have two of its marines walk side by side, dressed up in 1960s-era uniforms this past week emblazoned with the names “Usman” and “Harun” indicates that the Usman-Harun warship naming episode is, quite literally in this instance, far from dead.