TOC’s Terry Xu had Items Confiscated Again. What A Desperate Attempt to Silence us!

TOC's Editor Terry Xu had his items confiscated again. How many times have we seen it happen? Is this part of a desperate attempt to silence people who speak up?

END_OF_DOCUMENT_TOKEN_TO_BE_REPLACED

I am rather surprised to find this line in the paper that states there was “corruption in the highest echelons” of the PAP leadership. That was never what I had written.

END_OF_DOCUMENT_TOKEN_TO_BE_REPLACED

Lawyer and political veteran Lim Tean shared on his Facebook that he will be representing The Online Citizen (TOC) editor Terry Xu in his trial against a defamation suit filed by Singapore Prime Minister Lee Hsien Loong.

END_OF_DOCUMENT_TOKEN_TO_BE_REPLACED

The Online Citizen Is The Latest Opposition Voice To Get POFMA

The POFMA was issued to TOC due to them sharing the statement by Malaysia-based Lawyers for Liberty (LFL) in which they alleged stated "untrue, baseless and preposterous allegations about the use of unlawful methods in judicial executions conducted in Changi Prison" according to the MHA press release. Two others who shared the same LFL statement were also issued POFMA, according to the MHA press release. The two were another opposition voice Kirsten Han, and non-PAP controlled media, Yahoo Singapore Facebook.

END_OF_DOCUMENT_TOKEN_TO_BE_REPLACED

POFMA was passed in parliament in May earlier this year. Despite what the government says about protecting citizens from fake news, it is all their way of pushing down a draconian law that has the potential to stifle and kill authentic contrarian views and any point of view that the government doesn't agree with. Here are what other prominent academics, human rights advocates and even a former PAP MP have to say about POFMA.

END_OF_DOCUMENT_TOKEN_TO_BE_REPLACED

It Has Begun! TOC’s Terry Xu Served Letter By PM’ Lawyers, He Is Being Sued As Expected

The Writ was served on 5 September at Terry Xu's house, which indicated that the article in question "contained statements that are false and baseless and were calculated to disparage and impugn PM Lee as well as his office as the Prime Minister.” Xu has 8 days to enter an appearance to defend the claim. This is also not the first time lawyer Davinder Singh has represented PM Lee in his defamation suits. He was involved when PM Lee sued Roy Ngerng in 2015, and most recently Leong Sze Hian, whose case is still ongoing.

END_OF_DOCUMENT_TOKEN_TO_BE_REPLACED 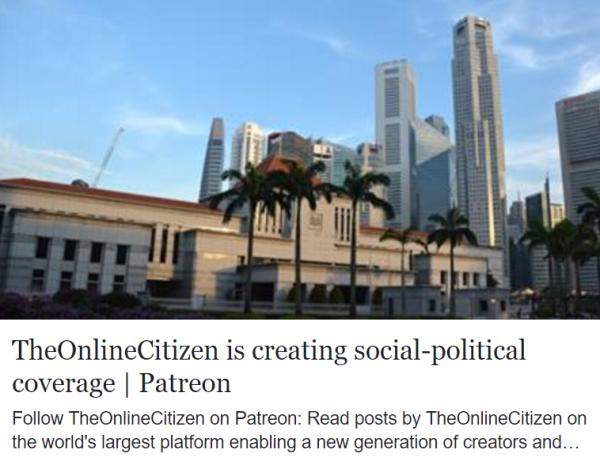 Ok guys and gals, so all of you cheering the rediscovery of common sense in the judgement on the Protection from Harassment Act, remember that the case would never have come about if TOC had not published Dr Ting's side of the case. Free speech still costs money, so put your money where your mouth is and support independent media in Singapore by contributing to the running costs of TOC.