YOUNG SINGAPOREANS ARE NOT APPRECIATIVE OF SINGAPORE! While I acknowledge that there are some shortcomings in Singapore as no system is perfect, one ought to look at the bigger picture in order to fully appreciate the situation. As we approach our 50th year of independence, it is my hope that young people who do not know the kind of suffering their forefathers went through start appreciating the standard of living in Singapore.

END_OF_DOCUMENT_TOKEN_TO_BE_REPLACED Part of the problem is that hawker food is too cheap. While there has been dismay over price increases, in reality they have not increased significantly in recent years. An article last year ("Serving up a good deal for hawkers"; May 30, 2013) noted that overall, the price of chicken rice has increased a mere 50 cents since 1993.

END_OF_DOCUMENT_TOKEN_TO_BE_REPLACED 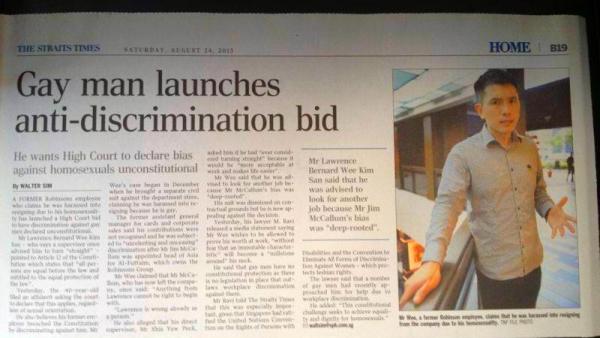 Workers who say they are forced to quit after their employer makes life unbearable should not expect to get any extra compensation other than that guaranteed in their contracts. This is the norm in typical cases of "constructive dismissal". And workers will have to show proof of actual loss stemming from the dismissal, such as mental or emotional duress, if they hope to get extra damages. The top court in Singapore made this clear in dismissing former Robinsons employee Lawrence Wee's appeal against the High Court, which had rejected his claim for damages after he argued that he had been pushed out by his employer.