Many Private Hire Vehicle (PHV) drivers work long hours and they can meet a variety of passengers while doing their rounds. Unfortunately for PHV driver Fyzal Anwerbag, one of his passengers would cause him to end up at the police station.

END_OF_DOCUMENT_TOKEN_TO_BE_REPLACED 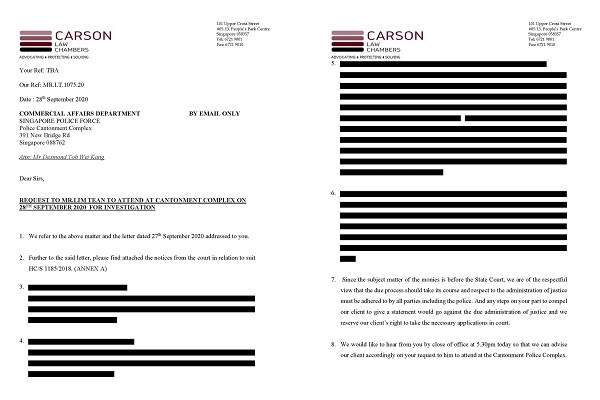 END_OF_DOCUMENT_TOKEN_TO_BE_REPLACED

Telegram has been a popular alternate to messaging apps such as WhatsApp. Nonetheless there are certain Telegram groups which share questionable content. A reader has informed us of another controversial Telegram group which currently has almost 20,000 members.

END_OF_DOCUMENT_TOKEN_TO_BE_REPLACED

A contributor wants to warn others who are intending to rent an office space in Ubi Centre. According to screenshots sent to us, the Ubi landlord allegedly did not return the tenant's deposit after the 2-year lease was over. The tenant has been chasing for the $3000 deposit since August 2019, but the landlord has been making excuses that he "has no money to return" even though he has rented out four other office spaces.

END_OF_DOCUMENT_TOKEN_TO_BE_REPLACED

A Facebook user has asked for help to identify a lady who allegedly assaulted his elderly father who is a taxi driver in his 70s. Unfortunately the woman fled the scene before the police arrived. The incident happened on 15 July 2020 at Prinsep Street.

END_OF_DOCUMENT_TOKEN_TO_BE_REPLACED

GE2020: Sinkies Should Make Police Report On All The Racist PAP Comments!

Standing in solidarity with Raeesah, all of us should make police reports about the various racist things PAP have said and inundate SPF with these reports. If thousands of Singaporeans do this, they’ll have to stop the smear campaign and investigation into Raeesah!

END_OF_DOCUMENT_TOKEN_TO_BE_REPLACED

After a police report was made against Raeesah Khan for her 2018 comments about the discrimination faced by minorities, a police report has now been made against the future Prime Minister Heng Swee Keat for his 2019 comments that older Singaporeans are not ready for a non-Chinese prime minister.

END_OF_DOCUMENT_TOKEN_TO_BE_REPLACED

Recently there was public outcry over several photos of groups gathering along Robertson Quay. Some of these people were allegedly gathering around to socialise after buying takeaway alcohol from nearby restaurants. The Straits Times (ST) published a 17 May 2020 article on this incident. However sharp-eyed netizens noticed the state media had altered this article. Screenshots of the article showed the deleted sentence said "The marketing manager at SPH radio said she saw two uniformed policemen in the area, but they "just walked past"".