As I listened to the President’s address to Parliament at its opening on Monday, I can’t help but was drawn to the part where she mentioned that Singaporeans “desire for more diverse voices to be heard, and stronger checks and balances”. Until and when both the President and Speaker of Parliament are prepared to walk their motherhood talks and Opposition MPs are able to muster enough courage to thump through contentious issues without fear or favour, the next 4-5 years will be a replica of post-2011 where the PAP will rebuild its lost momentum.

END_OF_DOCUMENT_TOKEN_TO_BE_REPLACED

The Singapore 14th Parliament opened yesterday on 24 August with President Halimah Yacob delivering an address. However the focus of Parliament reopening was captivated by the Workers' Party MPs who turned up with their spouses. Many beautiful couples were seen confidently strutting themselves into Parliament. Who do you think stole the show?

END_OF_DOCUMENT_TOKEN_TO_BE_REPLACED

Recently, the Istana advertised for butler and chefs jobs on the government portal for those interested in working for the President. As with most job advertisements, basic remuneration was also disclosed. This has got people talking, as simple calculations would show that President Halimah Yacob earns about 48 times the salary of a chef at the Istana.

END_OF_DOCUMENT_TOKEN_TO_BE_REPLACED

FLAT GOING FOR $460K, IN THE SAME BLOCK AS PRESIDENT’S YISTANA

Dubbed the Yistana, the listing also indicated that the house costs lest than half a million dollar, and situated in the most safest HDB block in Singapore. The unit being marketed in three floors below the President's own jumbo house.

END_OF_DOCUMENT_TOKEN_TO_BE_REPLACED

THERE SHD BE A BY-ELECTION IF HALIMAH YACOB BECOME PRESIDENT 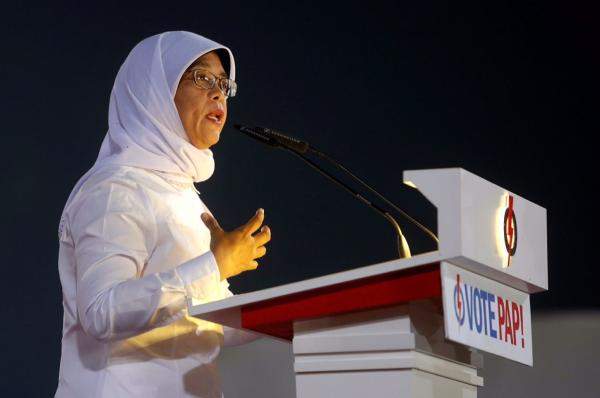 According to PAP's GRC laws and the Singapore Constitution, the GRC scheme was primarily implemented to enshrine minority representation in Parliament. In other words, the key purpose of GRC is to have a minority MP. If Halimah Yacob quits as MP to become president of Singapore, Marsiling-Yew Tee GRC will be short their minority MP and that would be against the law and against Singapore Constitution. A by-election for the GRC must be held to have another minority MP elected into parliament.