Selamat committed the offence on June 22, and he becomes the first person to be sentenced for throwing a shared bicycle from height. A second charge of dishonestly misappropriating a $300 ofo bicycle was taken into consideration in sentencing. Selamat's act of throwing the bike had narrowly missed Madam Rajamanickam Jayalakshimi, 42, and her husband, who were sorting out newspapers to sell and deliver to residents at the void deck at 5.36am that day. The bike fell barely 5m away from them.

END_OF_DOCUMENT_TOKEN_TO_BE_REPLACED

MAN TURNS OFO BIKE INTO GOLD. IS IT VANDALISM OR NOT?

My neighbour turned an OFO bike to gold with his Midas touch. Please see the attached photo. He encountered the god Dionysus last week and was granted one wish for his good deed of hiring a Singaporean instead of a foreigner.

END_OF_DOCUMENT_TOKEN_TO_BE_REPLACED

In the latest such incident, a 47 year old man has been arrested for throwing a ofo rental bike down from a HDB block in Upper Boon Keng Road. The bike was thrown down from the 15th floor at block 11 in the early hours of Thursday morning. The man who threw the bike appeared drunk, and he was found sleeping at the corridor of the same floor he had thrown the bike from. Police received a report on the incident, and arrested the man on the same day. It was fortunate that the killer litter did not hit any unsuspecting passer-by below the block. This is a very serious act of vandalism and killer litter, and it could kill if the bike was thrown to anyone below.

END_OF_DOCUMENT_TOKEN_TO_BE_REPLACED 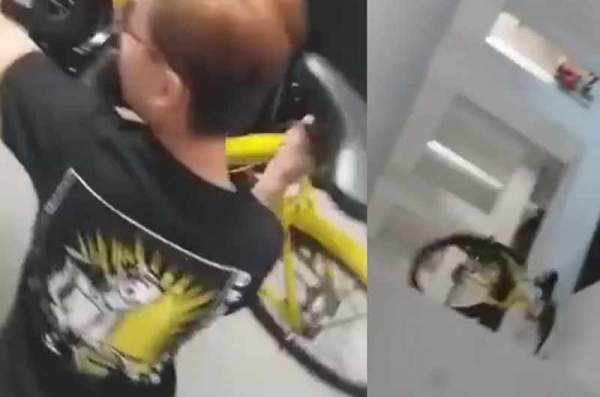 In a viral video uploaded on 15 June 2017, two teens were seen throwing an Ofo bike down a HDB block without caring if there was anybody walking downstairs. The teen even said in the video that this was not his fucking fault. This act of killer litter has enraged netizens.

END_OF_DOCUMENT_TOKEN_TO_BE_REPLACED

The previous user was so inconsiderate that he chained the OFO bike to another bicycle. How can anyone else use it now?! 1st world country, 3rd world behaviour?