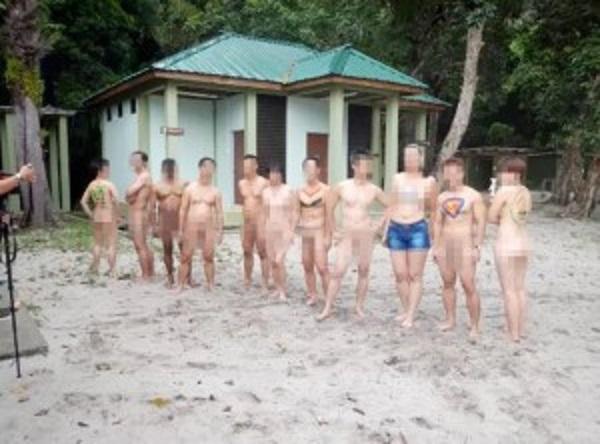 A video of a group of people in the buff outdoors, allegedly participating in the “Malaysia-International Nude Sports Games 2014 Extravaganza”, has been causing a stir on social media. The clip, lasting nearly five-and-a-half minutes, was allegedly shot on a secluded beach in Penang where so-called “naturists” frolicked and took part in physical activities out in the open. Among others, the event participants were seen racing one another in the nude, performing kettle bell exercises around a campfire and a “Gangnam-style horse dance” where a woman straddles a man on his back as he walks forward.

END_OF_DOCUMENT_TOKEN_TO_BE_REPLACED

Stephen McKensie, 33, from Portsmouth said: ‘I have been sleeping in the nude for six years now and it’s so much more comfortable than wearing pyjamas or boxer shorts. ‘My wife does it too, and we have never been happier. It helps you relax when you’re in bed.’

END_OF_DOCUMENT_TOKEN_TO_BE_REPLACED

Just ahead of what is expected to be a massive pro-democracy rally in Hong Kong on July 1 (coincidentally, the birthday of China’s Communist Party), four elderly Chinese women reportedly staged a nude protest against government corruption in front of the U.S. Embassy in Beijing.

END_OF_DOCUMENT_TOKEN_TO_BE_REPLACED

Eng Eik Khoon, who is more than twice the age of the 26-year-old woman, had taken the pictures of her while she was sleeping in June last year. A month later they broke up. Wanting to embarrass her, he posted the photographs to two different QQ accounts in November. A search of Eng's mobile phone also turned up a screenshot of a video of the couple having sex in 2012. He had also sent her text messages threatening to reveal their relationship to others if she refused to see him again.