SportsHub has decided that the pitch at the National Stadium will be fully grass. A new grass pitch will be grown at a nursery and when it is matured it will be transported to the stadium and laid on top of the current hybrid pitch. All this will be done in time for the SEA Games in June next year, SportsHub said in a statement on today (Dec 20). It added that the current hybrid pitch is now playable, as seen in the recent Suzuki Cup. But while the grass is able to grow quickly, it takes a long time to anchor and sink roots. As such the pitch is not robust enough for multi-purpose and intensive usage.

END_OF_DOCUMENT_TOKEN_TO_BE_REPLACED 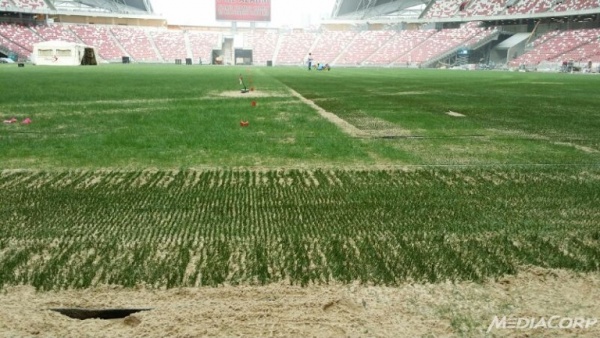 After months of controversy and spending S$1.5 million on new lighting equipment to try to improve the quality of the National Stadium pitch, Sports Hub Pte Ltd (SHPL) is making a drastic U-turn: It will resurface the pitch permanently with artificial turf – the surface it had originally considered but opted against, TODAY has learnt. This means that less than six months after the new stadium was opened, the S$800,000 Desso GrassMaster pitch – a hybrid of synthetic and natural grass– faces the prospect of being replaced with an all-new synthetic surface.