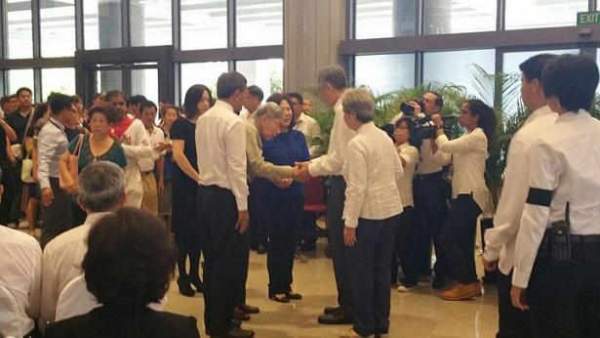 On Friday afternoon, veteran opposition politician Chiam See Tong paid his respects to the late Lee Kuan Yew at Parliament House. The 80-year-old Chiam was accompanied by his wife NCMP Lina Chiam. At Parliament House, he was received by PM Lee Hsien Loong and his wife Ho Ching.

END_OF_DOCUMENT_TOKEN_TO_BE_REPLACED

An intimate look at the life of Chiam

A MULTIMEDIA project by four undergraduates on Singapore's longest-serving opposition politician has garnered close to 900 "likes" on Facebook since being launched this week. The project offers an intimate look at the life of Mr Chiam See Tong, and chronicles his memories of six terms spent as Potong Pasir MP as well as residents' memories of the 79-year-old. Titled My Kind Of Town after the neighbourhood's slogan, it was conceptualised and produced over the course of a year by Nanyang Technological University final-year students Wong Kar Weng, 24, Cara Chiang, 23, Basil Edward Teo, 24, and Sulaiman Daud, 26. All hail from the university's Wee Kim Wee School of Communication and Information. The project also offers insights into Mr Chiam's life since the 2011 General Election. He has been largely out of the spotlight since, after a second stroke in 2008 and a hip injury last year.

END_OF_DOCUMENT_TOKEN_TO_BE_REPLACED

Chiams need a dose of reality

One wonders what led the Singapore People’s Party leaders to re-elect a frail Chiam See Tong and his wife, who lost an Opposition stronghold in the last election, to head the party on Friday. However, he clearly does not have the stamina to lead a political party that is serious about contesting the next general election. He needs help walking. Mrs Lina Chiam, 65, his wife, lost Potong Pasir by 114 votes and is keeping the Chiam flag flying as a Non-Constituency MP.

END_OF_DOCUMENT_TOKEN_TO_BE_REPLACED

It was supposed to be a Christmas walkabout for the Singapore People’s Party (SPP) in Potong Pasir and Bishan last Sunday (Dec 22) morning. Within hours, however, when SPP’s secretary-general Chiam See Tong and Non-Constituency Member of Parliament Lina Chiam showed up, the trip had become a mini Meet-the-People’s session on the go. In Potong Pasir, residents immediately came up to give the Chiams their well-wishes before they started complaining about their current Member of Parliament (MP), Sitoh Yih Pin. Some even took the chance to share with the Chiams issues they faced ever since Sitoh took over the reins.