Yet another case of an injured foreign worker who was owed money by his boss, but even though the Courts asked his employers to award damages to him, he is unable to claim his money till today. News reported that injured Bangladeshi construction worker Sujan Ahmed was awarded by the Labour Court a victory over his employers, as they were told to compensate him for permanent injuries he suffered after a fall in May 2015. However, the company, Ridgeway Marine and Construction refused to make good on the $9,145 owed to the injured worker.

END_OF_DOCUMENT_TOKEN_TO_BE_REPLACED

WHY ARE LABOUR LAWS HERE UNFAIR AND CRAPPY? 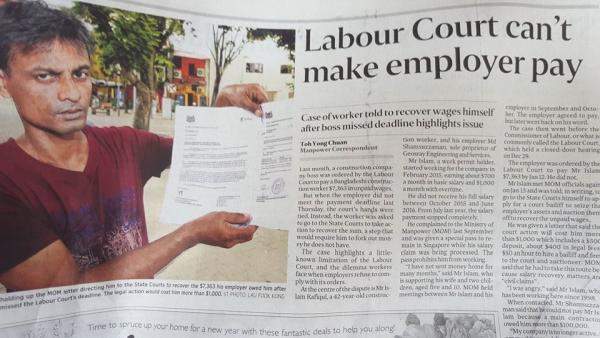 What kind of crap lawmakers do we have here? They are quick to amend laws to censor freedom of speech and protect the PAP-govt but they allow such unfair labour laws to exist? This poor foreign worker's case highlights how pathetic our labour laws are. Our Labour Court has no teeth to enforce any directive it gives to derelict employers i.e. it can ask them to pay up but they have no power to punish those who ignore the request.