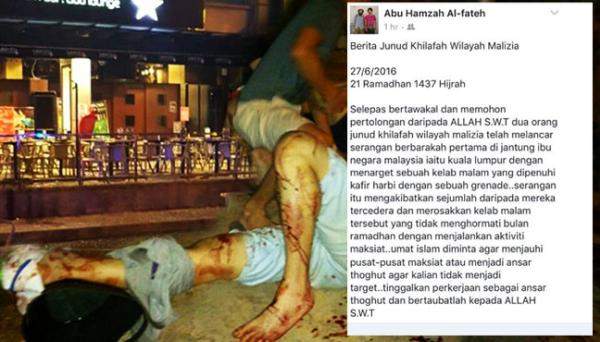 Mohammed Wanndy Mohamad Jedi, a Malaysian who left for Syria to join the ISIS terrorist group announced on Facebook that the grenade blast in Puchong Malaysia was the work of the ISIS militant group. He alleged that the attack was punishment for those who did not respect the month of Ramadan and for carrying out vice activities during this holy month.

END_OF_DOCUMENT_TOKEN_TO_BE_REPLACED

Carpenter’s Medal of Honor nomination stems from reports that, as a 21-year-old lance corporal, he intentionally covered a grenade to save the life of his friend, Lance Cpl. Nicholas Eufrazio on Nov. 21, 2010, as the two Marines were standing guard on a rooftop in the Marjah district of Afghanistan’s Helmand province. Both men survived the blast, but were badly wounded. Carpenter — whose Medal of Honor has not been officially announced — had serious injuries, including the loss of his right eye, the blowing out of his right ear drum, a fractured nose, and destruction of his lower jaw and cheek bones. Carpenter’s face is marked by shrapnel scars from the grenade’s explosion.