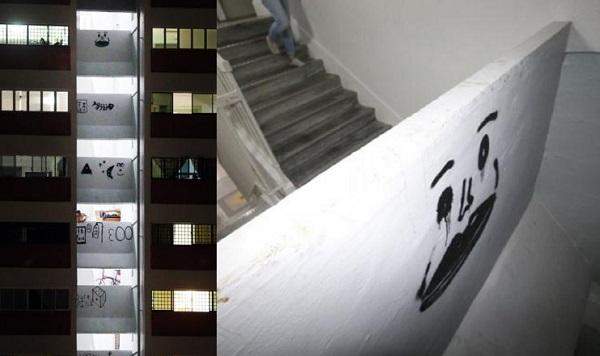 Residents living near Block 9 in Marsiling HDB estate got a rude shock on Sunday evening. Their HDB block in Marsiling was vandalized and its exterior walls on the block from the 16th to 21st story were scribbled with childish graffiti. The vandal use black spray paint to paint childish pictures like fishbone, triangles, traffic lights, eggs and eyes on the exterior walls of the HDB flat.

END_OF_DOCUMENT_TOKEN_TO_BE_REPLACED I spotted a young woman spraying graffiti on the Simei MRT pillar yesterday at around 1:15 pm. She had two companions with her. They were tagging the pillar with black spray paint in full view of passersby. They looks young around 19 to 22 years old.

END_OF_DOCUMENT_TOKEN_TO_BE_REPLACED

The police have issued a statement today (28 May) saying that they have arrested an as yet unnamed 71-year-old man for suspected involvement in a series of bus stop vandalism cases that occurred along Clemenceau Ave, River Valley Road, Hill Street and Victoria Street. Police said they first received a report of graffiti on the advertisement board of a bus-stop along Hill Street, at about 8am on 23 May.

END_OF_DOCUMENT_TOKEN_TO_BE_REPLACED

Five 17-year-youths are set to be charged for vandalism on Saturday, for their suspected involvement in the rooftop graffiti case in Toa Payoh. I expected the vandals to be caught, but I did not expect them to be 17. Most 17 year olds in Singapore are politically apathetic and in their own world.. I wonder what caused these guys to commit such an act?