The family of Mr Shaun Tung, a security guard at rooftop bar 1-Altitude, is seeking answers on how he fell into a construction hole and died. According to his colleagues who saw the incident, Tung, 26, was apparently trying to keep out two customers of the bar from a barricaded area.

END_OF_DOCUMENT_TOKEN_TO_BE_REPLACED

A cyclist, in his bid to avoid getting humiliated after falling off his bike, was seen on video blaming a taxi driver who was near his vicinity of the fall instead. In the video, the cyclist fell down hard onto the pavement, but it was clearly seen that his front wheel got caught on a drain cover by the road. But as everyone else had seen from the video, the cyclist clearly fell of his own accord, as he had overtaken a stationary taxi, and the taxi was not even moving between the time he overtook it and fell.

END_OF_DOCUMENT_TOKEN_TO_BE_REPLACED

AUTISTIC SINGAPOREAN YOUTH FELL TO HIS DEATH FROM M’SIAN APARTMENT 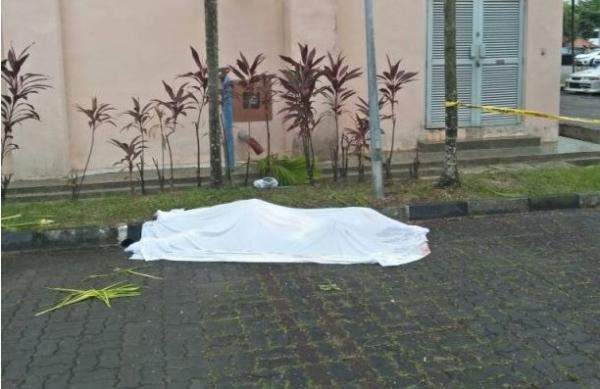 19 year old Singaporean Ng Teck Ann was found dead at the foot of his Malaysian apartment this morning. The boy was autistic but it is uncertain if it led to suicidal tendencies. Both mother and son had moved to Malaysia 5 years ago and only have each other as the father had passed away. #RIP

END_OF_DOCUMENT_TOKEN_TO_BE_REPLACED

OLD MAN PUSHED WOMAN OFF PLATFORM, AFTER SHE TOOK EXPIRED BREAD FROM HIM

A sub-contractor in charge of disposing unwanted bread for a company was jailed for five months after pushing a woman off a 0.8m high platform at their workplace. The push caused the woman to fracture nine ribs in the fall. The man, Toh Chai Kian, 74, pleaded guilty to the charge of causing grievous hurt in the incident in October last year at the loading and unloading bay of Gardenia Foods at Pandan Loop. In the incident, the woman, tan Souk Bee, 64, was at the bay when she picked up a bag of bread from Toh's tray. Toh became unhappy, so she placed it back. However, a quarrel broke out between the pair, and she walked away. Toh then ran to the woman and pushed her on her back with such force using both his hands, that she lost her balance and fell off the platform. Toh then walked away without helping her up. The pair did not know each other before this incident.

END_OF_DOCUMENT_TOKEN_TO_BE_REPLACED

HEARTLESS NTUC STAFF DID NOT HELP WOMAN WHO FELL & INJURED HERSELF Just got home from Fairprice at Zhongshan Mall. Witnessed a painful scene while I was about to proceed to the self checkout with my groceries. A lady shopper, guess she's around mid-fifties, slipped and fell behind me and was struggling to get up. She complained of the severe pain in her right arm coz she fell on it and was worried she might have a fracture. I took the ice pack from the ice box to apply on her arm and she was able to move her arm after a while, and told me the pain has subsided. I was very disappointed with the staff at the cashier and especially the old man standing in charge at the self checkout counters. NONE OF THEM CAME FORWARD TO CHECK IF THE LADY WAS ALRIGHT OR OFFERED HELP OR AT LEAST BRING HER A SEAT!!! Especially that old man, he just stood far away and didn't even show concern at all!!! Really wonder how the staff are trained and if they are trained at all to attend to such sudden incident. Fairprice authorities please look into this issue!

END_OF_DOCUMENT_TOKEN_TO_BE_REPLACED 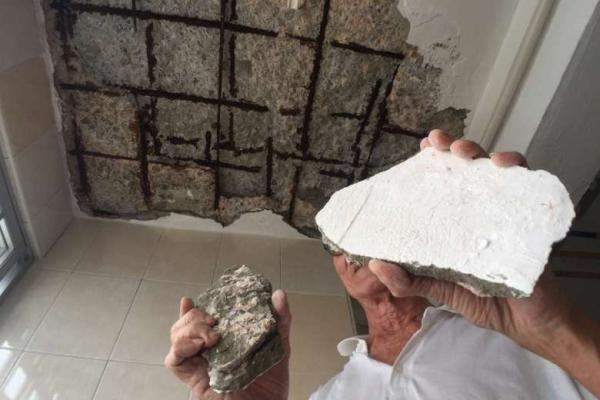 Madam Chen was walking to the toilet of her two-room rented flat when concrete pieces from her kitchen ceiling landed just in front of her. This happened at Block 51 Marine Terrace in the wee hours of Monday morning (Feb 6). The crash was so loud that their neighbour from a lower floor came up to find out what was happening.

END_OF_DOCUMENT_TOKEN_TO_BE_REPLACED

NOBODY STOPPED TO HELP MAN WHO FELL OVER BAR FRM BICYCLE, ONLY THESE CONTRUCTION WORKERS DID On the way to work at ECP , my chain snap causing me to go over the bar and face plant . Luckily i got wear a helmet , manage to walk away with a few abrasions on my elbow and my knee .

END_OF_DOCUMENT_TOKEN_TO_BE_REPLACED

SLAB FALLS OFF BLOCK FACADE, SMASHED INTO PIECES WHEN IT HIT GROUND & VEHICLES 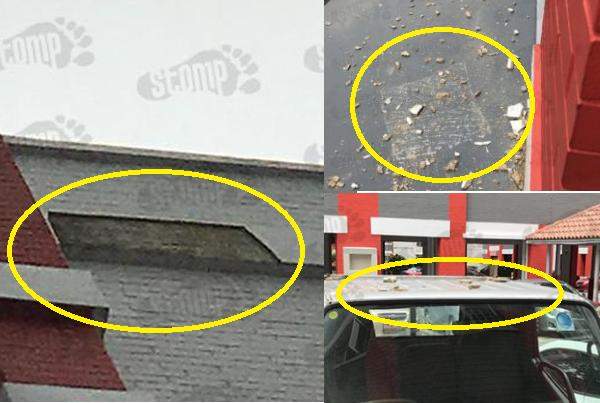 Yesterday (Nov 27), a slab fell off the facade of 449 Hougang Avenue 10 at 11am. The slab was reduced to pieces upon hitting the ground and vehicles. The debris was spread across a wide area.

END_OF_DOCUMENT_TOKEN_TO_BE_REPLACED

PART OF CIRCUIT RD HDB BLOCK FALLS OFF, GIANT BOARD SMASHES INTO THE GROUND 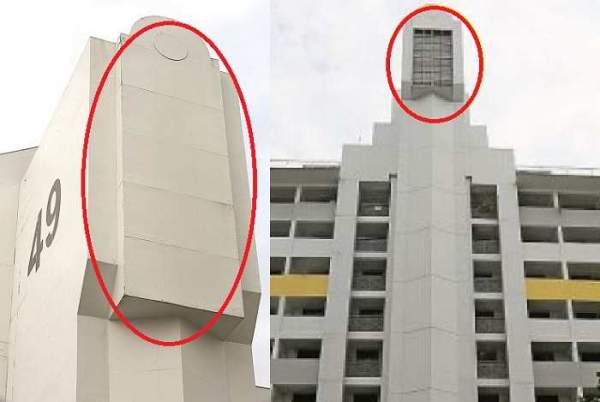 At about 6.00am Wednesday morning (19 October 2016), a slab of wall attached at the top of a Circuit Road HDB block 51 fell off and smashed into the ground floor. Fortunately, no residents were in the area when the incident happened but it has shocked residents who were surprised that such an accident could even occur. Local resident Gary shared that Circuit Road estate (Macpherson SMC under Tin Pei Ling) has many elderly residents and they may not be agile enough to avoid such falling objects. If an object from height falls on them, it could cause serious and even fatal injuries to them.