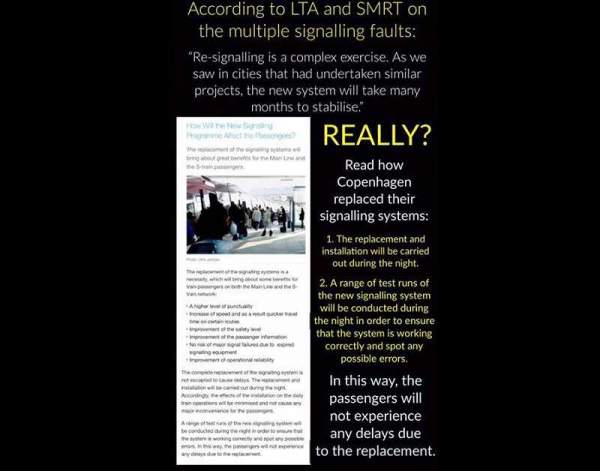 In a letter to the State Media yesterday, LTA and SMRT claimed that the signalling issues encountered during the replacement of the signalling system was common to cities that had "undertaken similar projects" as the "new system will take months to stabilise". We did a check and found that contrary to LTA and SMRT's claim, this wasn't the case in Copenhagen where a similar exercise is being undertaken. According to Denmark's Ministry of Transport, Building & Housing, replacement, installation and trials are all being conducted at night to minimise any on convenience to commuters.

END_OF_DOCUMENT_TOKEN_TO_BE_REPLACED The girls noticed that if they slept with their mobile phones near their heads at night, they often had difficulty concentrating at school the next day. They wanted to test the effect of a cellphone's radiation on humans, but their school, Hjallerup School in Denmark, did not have the equipment to handle such an experiment. So the girls designed an experiment that would test the effect of cellphone radiation on a plant instead.

END_OF_DOCUMENT_TOKEN_TO_BE_REPLACED

Hello, I've been asked to clarify about an article on Anyhow Hantam: You can read it if you haven't. In it, the following was said: " Roy wants to be a martyr and seek asylum. Is he who ask me to help him one." I would like to clarify that this incident has never happened. Please let me explain what I've been going through. The past week or so has been a roller coaster ride. Today is especially distressful.

END_OF_DOCUMENT_TOKEN_TO_BE_REPLACED

I believe Mr Ng will comply with this fresh demand. But this action comes as no surprise to me. For the past week I've been chiding his close friend cum advisor, fellow blogger and activist Ms Han Hui Hui, over her repeated actions in blowing this issue bigger. Much to the detriment of Mr Ng's legal avenues. I was also shocked at Mr Ng's continuous statements on Facebook (FB) and his blog over the matter and was even puzzled as to why his lawyer M Ravi, was responding to Davinder Singh in such a haughty and demanding manner. A good lawyer would never advise his client to 'up the ante' in a lawsuit that's clearly not in his favour. This will only lead to the other party making more demands much to the detriment of his client.