It was last Sunday when me and my friend were out there to find foods to eat. I bought some “bala-bala”, kind of vegetables that fried with flour.. And I asked the seller if I could have more chilli.. He gave me two pieces of big chilli then he added one more. He gave me a strange look after. And I say thanks to him.. I was shocked when I was home. It was just after i almost finish all my foods .. I find out that he give me one rotten chilli with maggots crawling on it.. Omg .. I promised myself not to buy from his stall

END_OF_DOCUMENT_TOKEN_TO_BE_REPLACED

NTUC SOLD ME CONTAMINATED MAGGI CHILLI, NONCHALANT TO MY COMPLAINTS 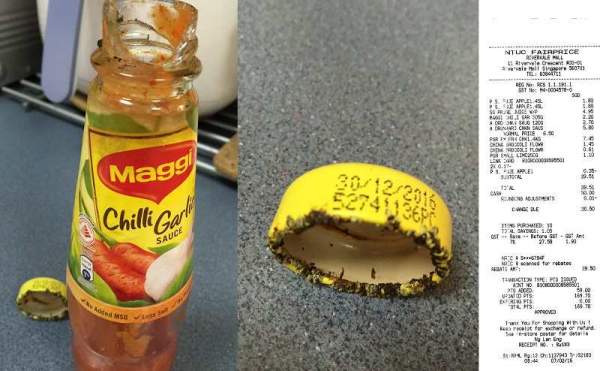 I brought a bottle of Maggie Garlic Chili Sauce a day before the lunar New Year from my neighbor NTUC fairprice supermarket , intended to cook chili prawns to serve my family on 9 Feb (2nd day CNY) 2016. Little do I know that I will be in for a shock. As you can see the bottle had already cracked and the cap was dirty and contaminated. I wrote to the online customer feedback portal on the same day and had since received unsatisfactory feedback from the union backing supermarket chain. The latter is nonchalant and careless.

END_OF_DOCUMENT_TOKEN_TO_BE_REPLACED

Indian police have arrested a trader for allegedly torturing a 11-year-old maid who was forced to eat chillies which were also rubbed on her body, an official said Monday, in the latest abuse of domestic servants. Sarjil Ansari, a 38-year-old napkin seller, was arrested at the weekend and his wife Farhat was being questioned, said an investigating police officer in Thane district neighboring Mumbai.