On Tuesday, a spokesperson from the Archdiocesan Communications Office, responded to TODAY’s queries, saying Amos’ “decision to leave the Church was totally of his own accord”. The spokesperson added: “The Church respects his freedom to leave the faith. Nevertheless, the doors of the Church continue to remain open to him, and we pray that God will enlighten him in the truth.”

END_OF_DOCUMENT_TOKEN_TO_BE_REPLACED

AMOS WAS CATHOLIC BUT STOPPED GOING TO CHURCH IN 2013 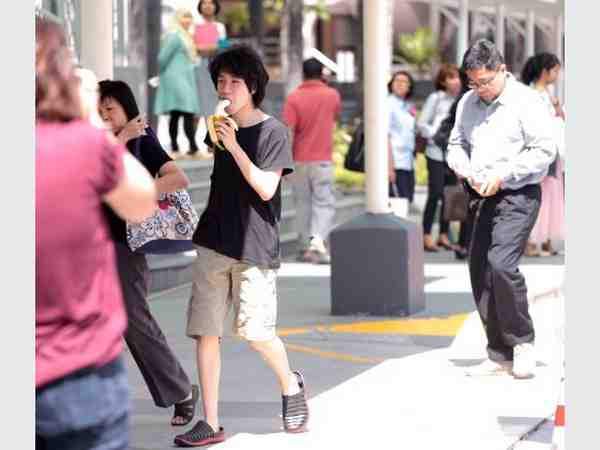 He was raised a Catholic and began attending mass independent of his family from Secondary 1, Amos Yee said in his statement to the police. The blogger, who is facing charges for posting an obscene image online as well as content intended to wound the religious feelings of Christians, said he had considered himself a practising Catholic until some incidents caused him to become an atheist.

END_OF_DOCUMENT_TOKEN_TO_BE_REPLACED A Singapore couple pledged their love to each other at both a church and a Taoist temple on Sunday, in a "uniquely Singapore" wedding that featured both their religions. Mr Chung Kwang Tong, 30, is the secretary-general of the Taoist Federation Youth Group, while his wife Jacqueline Yip, 28, is Catholic. They decided to do both services out of respect for both their faiths, Mr Chung told The Straits Times.

END_OF_DOCUMENT_TOKEN_TO_BE_REPLACED

POPE BLASTS VATICAN ELITES FOR BEING BLINDED BY POWER AND GREED! Instead, he chose the occasion to issue a stinging critique, telling the priests, bishops and cardinals who run the Curia, the central administration of the Roman Catholic Church, that careerism, scheming and greed had infected them with “spiritual Alzheimer's.” Francis, the first non-European pope in 1,300 years, has refused many of the trappings of office and made plain his determination to bring the Church's hierarchy closer to its 1.2 billion members.

END_OF_DOCUMENT_TOKEN_TO_BE_REPLACED

Catholics from some walks of life have expressed doubt over Vincent Wijeysingha’s claims that he was molested by a priest when he was a teenager. This after Vincent made a bombshell revelation a few days ago saying he was still play wrestling with a priest when he was 15. A Catholic, Yeshu Aini, said: “I find Vincent Wijeysingha’s claims about almost being molested dubious because there is no evidence. Where is the proof? We can’t just rely on his word, right?”

END_OF_DOCUMENT_TOKEN_TO_BE_REPLACED

GAY CATHOLIC: I AM ACCEPTED BY MY CHURCH

To all the bigots who used the bible as an instruction booklet for hating and discriminating us, shame on you. Your actions are akin to forging your parents signature to get what you want but can't. Stop yourselves from the greatest sin of all, stop hating god's creation and telling his children what is wrong or right; God is the judge, we have no rights.

END_OF_DOCUMENT_TOKEN_TO_BE_REPLACED

This however does not mean that we shun this extra-special people away. We still have to treat them justly as how we would treat anyone else. I belief that The Most Reverend William Goh is Sincere in his letter "that the Catholic church regarded each individual, regardless of their sexual orientation as being a child of God, “and is therefore worthy of love and respect”, and that the church also discouraged discrimination of any kind." Although some may not be as hospitable to the LGBT ppl, but however, this "some" does not represent the Catholic diocese of Singapore, those who are obedient to the Bishop are the people to represent the Catholics.

END_OF_DOCUMENT_TOKEN_TO_BE_REPLACED

The archbishop is already contradicting himself and discriminating against LGBT Singaporeans when he states that, "This kind of lifestyle should not be promoted by Catholics as it is destructive to society and contrary to Christian values, which are life-giving and fruitful. He is being hypocritical when he does nothing to decry adultery, premarital sex and having sex with a menstruating woman.

END_OF_DOCUMENT_TOKEN_TO_BE_REPLACED

HIGH-FLYER CIVIL SERVANT KWEK MEAN LUCK: “I WANTED TO BUY HER CHAIRS AND UPGRADE HER BED, HER CLOTHES”

It was a humbling experience. "It shows that in terms of assistance, you need to have that broader view of what is helpful and not just have your view of what is helpful." These and other encounters taught him that people's circumstances are complex and that non-material assistance - like company - can be just as important. Caritas is building a social services hub in Toa Payoh, and Mr Kwek recalls a social worker's advice: "Please don't make it look like a help centre, because if you do, those who need help will not come. People don't want to be seen as though they need help."