SDP: IF WE WIN LAWSUIT, CALL FOR BY-ELECTION. IF WE LOSE, GRC SYSTEM IS MOOT

SDP's Bryan Lim assured netizens he will let the public know how PAP has time and again altered laws to its political advantage. He thinks it is PAP's loss if SDP loses the lawsuit too, as it shows the failure of its GRC system.

END_OF_DOCUMENT_TOKEN_TO_BE_REPLACED 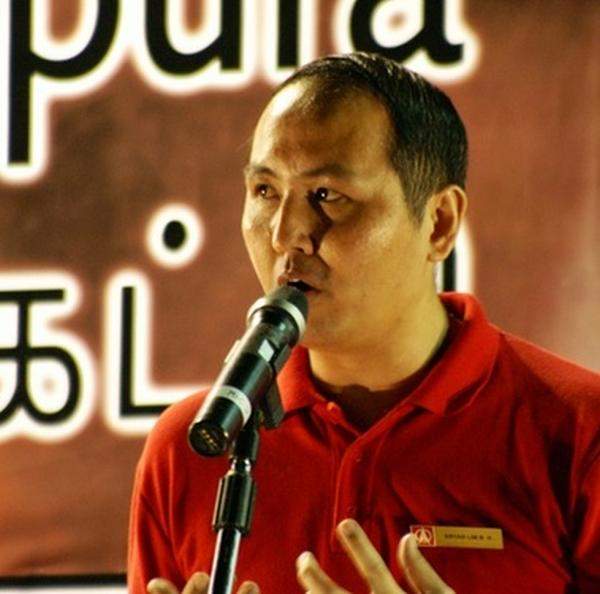 SDP member Bryan Lim Boon Heng went on house visits in Marsiling and said the residents there are lukewarm about supporting Halimah Yacob for President. He also said they agreed there should be a by-election and believes the Government should not deny them their rights to call for one.

END_OF_DOCUMENT_TOKEN_TO_BE_REPLACED 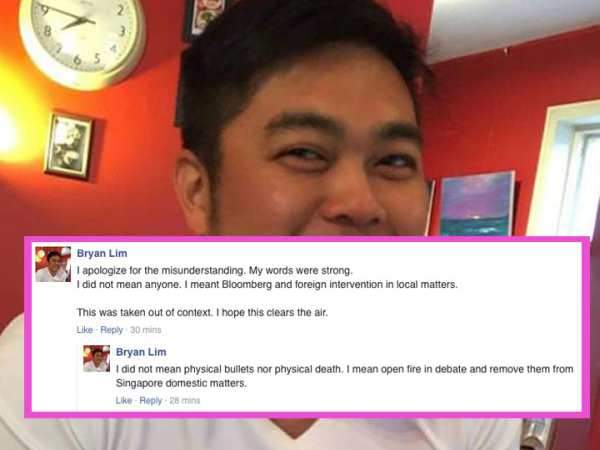 You must have read the news today that Bryan Lim is fined $3500 for a comment that he made here. I wish to remind all readers and members of this group that this is a public group. Any and all posts and comments here are read not only by people from this group, but also by many LGBT activists. You show them an Achilles heel, and they'll drag you down to the pits of hell. I feel sad for Bryan. Nobody really took notice of his comment. It's just one of those men bravado talk. In America, they call this locker room talk. Do I think he really meant what he said? Not at all. Is it unfair? I think it is.

END_OF_DOCUMENT_TOKEN_TO_BE_REPLACED

MAN WHO THREATENED TO OPEN FIRE ON LGBT SUPPORTERS FINED $3500 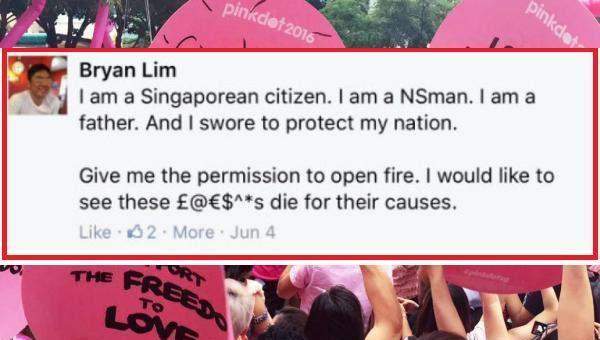 A man has pleaded guilty in court to to a reduced charge of making a threatening, abusive or insulting communication under the Protection from Harassment Act. He will be fined $3,500. "I am a Singaporean citizen. I am a NSman. I am a father. And I swore to protect my nation. Give me the permission to open fire. I would like to see these £@€$^*s die for their causes."

END_OF_DOCUMENT_TOKEN_TO_BE_REPLACED The Facebook user named Bryan Lim has been charged in court for inciting violence against the Singapore LGBT community. His defence lawyer Adrian Wee said that Lim was informed of the charges on Wednesday and all his electronic devices (laptop, desktop, smartphone) were seized by the police. After the saga was blown out of proportion, Lim apologised with a half-hearted explanation to shirk responsibility. He said: "I did not mean physical bullets nor physical death. I mean open fire in debate and remove them from Singapore domestic matters".

END_OF_DOCUMENT_TOKEN_TO_BE_REPLACED 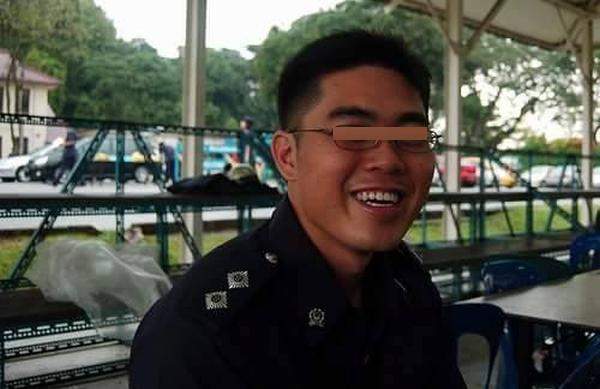 After making a police report against the online threats of Bryan Lim earlier today, I've just received a call from the SIO of Tanglin Police Station informing me that the case has been referred to the secret police for further investigations. They have also appealed for more information on this Bryan Lim so if anyone knows him personally please come forward to help our home team with their investigations.

END_OF_DOCUMENT_TOKEN_TO_BE_REPLACED

MAN WHO THREATENED TO “OPEN FIRE”, BRYAN LIM APOLOGISES – IT’S OUR FAULT FOR TAKING HIS WORDS OUT OF CONTEXT The target of his hatred, he claims, is not LGBT people, but foreign companies like Bloomberg. We took his words out of context, he says, because he wasn't referring to physical bullets or physical death. Nice try, Bryan. Your exact words once again were: "Give me the permission to open fire. I would like to see these £@€$^*s die for their causes." We all heard exactly what you meant -- loud and crystal clear. Sacking Bryan from the company would be too easy. The perfect outcome from this episode would be for Canon Singapore to require him to clock in community service hours in service of the LGBT community. The Singapore Police Force, however, needs to give this officer a dishonourable discharge, and get him to surrender his uniform with immediate effect. Here's a man who just threatened to open fire on a category of Singaporeans who did him absolutely no harm. Would we feel safer on the streets with this man in uniform and armed with a gun?

END_OF_DOCUMENT_TOKEN_TO_BE_REPLACED A man who threatened to open fire on the lesbian, gay, bisexual, and transgender (LGBT) community and supporters is currently investigated by the police. On his 4th June comment to an article posted on the page "We are against Pinkdot in Singapore", Bryan Lim said, "“I am a Singaporean citizen. I am a NSman. I am a father. And I swore to protect my nation. Give me the permission to open fire. I would like to see these £@€$^*s die for their causes.”" Given that Pulse Club in Orlando, Florida just saw the deadliest mass shooting in US history over the weekend, it is not surprising that at least 3 police reports have been made against Bryan's comments.