LEGAL FOR BIKE SHOP TO REPOSSESS MY BIKE DUE TO UN-RENEWED INSURANCE? 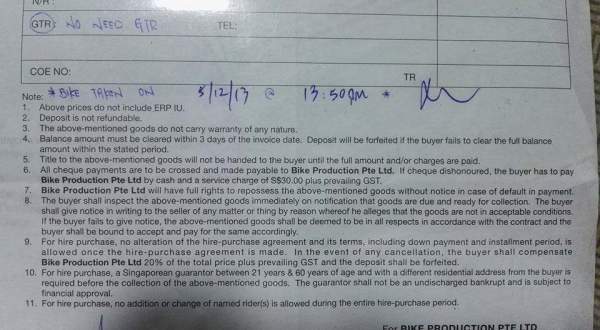 I bought a bike from this #BikeProduction Shop 610 Serangoon Road. I have last installment yet to clear due 4th Jan 16 . My insurance due on last Friday 4th Dec. My bike was towed by bike shop last night on the 7th Dec without notice. Reason - insurance not renewed! What I know is installment not paid they have the right to repossess my bike

END_OF_DOCUMENT_TOKEN_TO_BE_REPLACED I am currently in a huge predicament as I made the stupid mistake of letting a stranger(in fact don't even do it for ANYONE) COI (carry-on-installment for those not familiar with the term) my Gilera. This ass swipe has not paid for the monthly instalments to Speedway since July, and to avoid myself and my guarantors from being taken to court by Speedway, I had to make the payments. He also hasn't paid up the balance of $800(out of $1500) upfront cash agreed upon.

END_OF_DOCUMENT_TOKEN_TO_BE_REPLACED Yesterday morning I've met with a road bully near the traffic light of Bukit Puchong 2. I saw his motorbike coming from far behind, so I put on left signal to turn, but my action caused him missed the green light and he had been impatient with me since.

END_OF_DOCUMENT_TOKEN_TO_BE_REPLACED See this LTA officer never use brains when he work. This brainless LTA enforcement issue saman to the motorbike recovery vehicle which was there to retrieve a broken down motorbike.

END_OF_DOCUMENT_TOKEN_TO_BE_REPLACED

COUPLE FINED FOR HAVING SEX WHILE RIDING MOTORCYCLE

A Madhya Pradesh-based couple was fined for 'indecent and dangerous driving' here after their picture of riding a bike on a bridge violating traffic rules went viral on social media. The couple were photographed by a passer-by on Panaji's Mandovi bridge, riding a motorbike with the girl lying sprawled over its fuel tank, they said.

END_OF_DOCUMENT_TOKEN_TO_BE_REPLACED

DRIVERS BEWARE! TRAFFIC POLICE BIKES HAVE CAMERAS HIDDEN ON THE FRONT & BACK

I like to bring to your attention something that I noticed when I was on the roads. If you look closely at the bikes ridden by Traffic Police, they have CCTV cameras attached in the front and at the back of the bike. So along the way if the CCTV catch anyone speeding or using handphone, they will still be able to saman the driver even though the TP may not see it with his own eyes.

END_OF_DOCUMENT_TOKEN_TO_BE_REPLACED

MAN STABBED WHEN CONFRONTING THIEF WHO STOLE HIS BIKE An attempt to retrieve a stolen motorcycle turned bloody at a Woodlands carpark on Friday night. Mr Ng Yen Zhang, 31, had originally given up hope on finding his Honda motorbike, which was stolen from the car workshop he owns in Ang Mo Kio three weeks ago. So when he received a call from the police telling him that they had matched his bike's serial number to a vehicle at Block 569B Champions Way, near the Singapore Sports School, he was overjoyed. He claimed that he was told by the police to retrieve the vehicle.