END_OF_DOCUMENT_TOKEN_TO_BE_REPLACED

APPEAL FOR HELP TO FIND CAR WHICH RAN OVER BIKE & DISAPPEARED 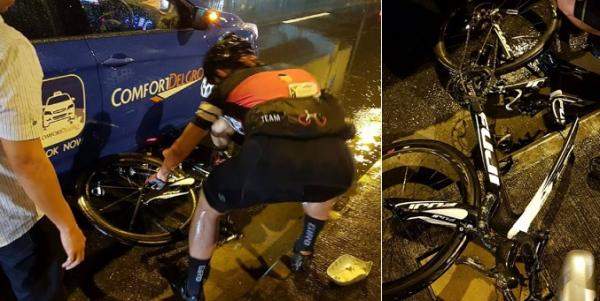 A netizen is asking for help to find a car that ran over his bike and simply disappeared. His bicycle was later ran over by another taxi.

END_OF_DOCUMENT_TOKEN_TO_BE_REPLACED

Our reader spotted not one, but two ofo bikes strewn on the ground by more inconsiderate people! It was unclear who did that but the bicycles were found sunbathing at Sengkang East Drive. Cannot be the wind too strong right? Is this also considered a "rash act"? :P

END_OF_DOCUMENT_TOKEN_TO_BE_REPLACED 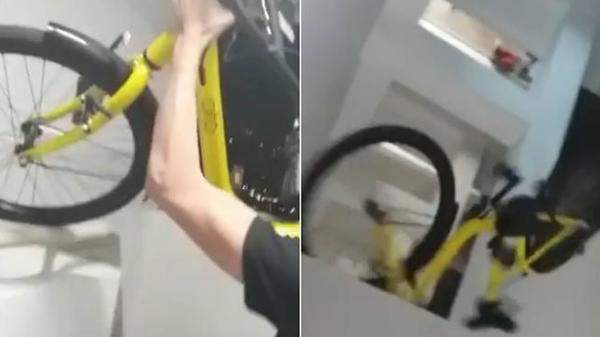 A 13 year old boy has been arrested yesterday for allegedly throwing an ofo bike from a HDB flat in Whampoa. This comes after a video of him and other teens went viral. Some people, including ofo Singapore, have already made police reports before the boy was arrested on the same day. The police classified his case as rash act and will take swift action. A person convicted of rash act may face up to 6 months' jail or fined up to $2500. However, the police said they may have other considerations as the boy is still a minor. Minor so can escape? How can liddat?

END_OF_DOCUMENT_TOKEN_TO_BE_REPLACED

RIP OFO BIKE, YOU WILL BE SORELY MISSED 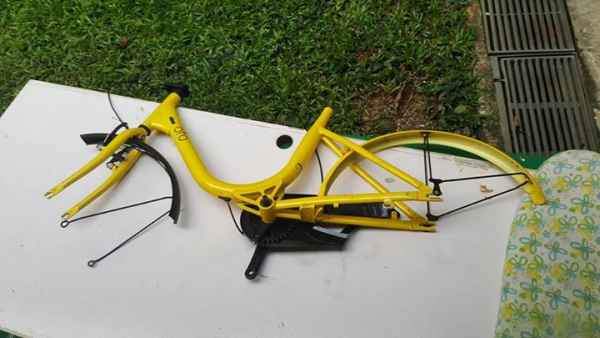 This is the reason why Singaporeans can't have good things. I found this bike brutally ripped apart in Taman Jurong Estate.

END_OF_DOCUMENT_TOKEN_TO_BE_REPLACED A 65 year-old woman and her 13 month old grandchild were badly hurt after a teenage cyclist rammed into them outside a condominium in Pasir Ris on 14 May. The elderly woman, Madam Lin Zhenghua, was carrying her grandchild when the accident happened at around 1pm that day. The grandmother fainted from the pain, all while clutching the toddler tightly to prevent her from getting hurt.

END_OF_DOCUMENT_TOKEN_TO_BE_REPLACED

DON’T TARGET US MOUNTAIN BIKERS, GO CATCH THOSE EBIKES INSTEAD A reader is against the requirement for mountain bikes to have handlebars shorter than 700mm. He thinks having a longer handlebar will provide more stability when cycling and would rather the LTA catch those errant ebikers instead. "Shouldnt LTA be educating pedestrian as well? Most pedestrian are hogging up the entire pavement, walking in all direction, and causing misunderstanding between cyclists and pedestrian. Not all cyclist are dangerous, most of the mountain bikers that ride the local trails respect the pedestrian and care for the safety. Do not let one reckless cyclist give you the idea that the whole cycling community is dangerous!"

END_OF_DOCUMENT_TOKEN_TO_BE_REPLACED With the rise of the number of bicycle on the roads now that three rental bike companies are aggressively pushing their business out to the public, parking spaces for bikes will now become a premium. It is no surprise then that many bicycles are parked indiscriminately, and not at the lots created for the bicycles. While the LTA are looking into this issue, where they are trying to create more bicycle docking stations, LTA are also taking action over those that parked their bicycles illegally. In the past week alone, 50 bicycles have been forcefully taken. The owners of the bicycle have to pay an admin fee to reclaim their bikes. Among places where the bikes were taken, are areas such as the bus stops, and walkways in housing estates.

END_OF_DOCUMENT_TOKEN_TO_BE_REPLACED Our reader spotted an ofo bike with broken handles, stolen pedals and a scratched carplate near Bedok Interchange. It's sad that there are so many inconsiderate people in Singapore.

END_OF_DOCUMENT_TOKEN_TO_BE_REPLACED

The previous user was so inconsiderate that he chained the OFO bike to another bicycle. How can anyone else use it now?! 1st world country, 3rd world behaviour?