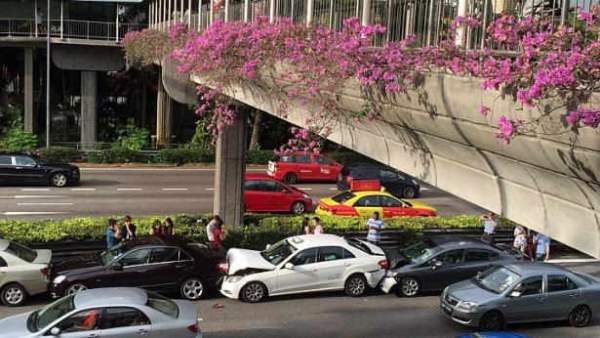 Ten cars were involved in a pile-up along the Pan-Island Expressway on Thursday evening. Four people were sent to hospital after the crash in the direction towards Tuas, after the Paya Lebar exit. A man in his 50s, a woman in her teens, and two women in their 50s were sent to Tan Tock Seng Hospital with minor injuries, a Singapore Civil Defence Force (SCDF) spokesman told The Straits Times.

END_OF_DOCUMENT_TOKEN_TO_BE_REPLACED My dad got into an unfortunate accident earlier this afternoon (13 Aug 2014). The accident took place along Upper Serangoon Road (heading towards City), approaching the junction of Upper Aljunied Road, around 1220pm. There was a cement truck who changed two lanes abruptly to avoid a double white line (without checking blind spot) and hit my dad's car and the eventual fate of our car can be seen from the picture. My dad is not hurt

END_OF_DOCUMENT_TOKEN_TO_BE_REPLACED My wife and two children were in a vehicle that was involved in a three-car collision on a slip road from the Central Expressway to the Pan-Island Expressway on June 19. The last car crashed into her car, which in turn hit a car in front. It was a minor accident and no one was hurt. The drivers alighted from their cars to take photographs and exchange particulars. At that moment, two “helpful” men stopped their vehicles to offer help to my wife and the driver of the first car.

END_OF_DOCUMENT_TOKEN_TO_BE_REPLACED

A MOTORCYCLIST was killed in a six-vehicle chain collision yesterday morning that left him pinned between a minibus and a tipper truck. Mr Sashivarman Murugakandar, a 22-year-old Malaysian, was pronounced dead at the scene at the junction of Ang Mo Kio Avenue 6 and Avenue 1. The pile-up involved a tipper truck, two cars, a motorcycle, and a minibus. A lorry in the next lane was also hit by one of the cars in the crash.

END_OF_DOCUMENT_TOKEN_TO_BE_REPLACED

Recently, the workshop told us that NTUC Income had denied our claim and repudiated all liability, as the other driver did not make a report. This was despite the evidence - the signed letter from the driver admitting his fault, and footage from our car video camera. The General Insurance Association told me my only recourse was to sue the other driver.

END_OF_DOCUMENT_TOKEN_TO_BE_REPLACED

Injured elderly man near tracks not hit by train: SMRT

An injured elderly man was found unconscious close to the elevated train tracks between the Tanah Merah and Expo MRT stations yesterday (Feb 1) afternoon. The Singapore Civil Defence Force (SCDF) said the 70-year-old suffered multiple lacerations to his body and was sent to the Changi General Hospital. Channel NewsAsia understands the man could have climbed over the platform screen doors at the Expo station and walked about 900 metres along the track towards Tanah Merah station.

END_OF_DOCUMENT_TOKEN_TO_BE_REPLACED

An elderly man sustained injuries to his head and is now unconscious, after he was hit by a train along the MRT tracks near Expo station on Saturday afternoon.

END_OF_DOCUMENT_TOKEN_TO_BE_REPLACED

Munir Mohd Naim will also be banned from driving all vehicles for five years upon his release. The 57-year-old, who is now doing odd jobs, pleaded guilty to causing the death of Nigel Yap Yew Cheong, 13, and his seven-year-old brother, Donavan, who was a pillion rider, while they were cycling along Tampines Street 45 at 5.43pm on Jan 28 last year.