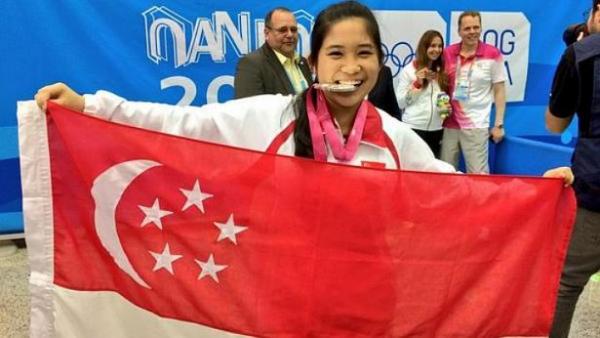 Singapore's Martina Lindsay Veloso has won the country's first medal at the Nanjing Youth Olympic Games. The 14-year-old Singapore Sports School student took the silver in the girls' 10m air rifle event at the Fangshan Shooting Hall on Tuesday morning. Her score of 207.2 was just behind Switzerland's Sarah Hornung's winning effort of 207.8. Germany's Julia Budde took the bronze with a score of 186.3.

END_OF_DOCUMENT_TOKEN_TO_BE_REPLACED

This concerns former Lions XII and national defender, Sevki Sha'ban, who represented Home United FC since last year. He was unceremoniously dismissed over week ago without any compensation. What's troubling is the dismissal coincides with the Ramadan period and the upcoming Hari Raya Puasa. As a Malay-Muslim, this is the biggest festival of the year. What's even worse is that he was dismissed without any form of compensation.

END_OF_DOCUMENT_TOKEN_TO_BE_REPLACED Valencia made surprise offer for Tampines and Singapore star striker Alec Duric. Straight Times Corrospondent is said to have witness Duric's agent Durian at the Mestalla training ground. It was rumored the transfer fee to be around $1.2m, with the Singapore star striker getting a whopping 5 digit salary per week for 1 year.

END_OF_DOCUMENT_TOKEN_TO_BE_REPLACED

In a bid to live up to its motto of "Bringing happiness back to Thai people", the junta managed to pull off a deal for the live telecast of all World Cup 2014 matches on free-to-air TV, which will bring joy to 22 million households. A press conference titled "TV5 returns happiness to Thai people to join the World Cup spirit" will be held on Thursday at the Army's TV5 headquarters. "It is public money. It's not that we have money and wake up one day and spend money to buy anything (we want). Unless we spend it for disaster cause," she tweeted. Social media users on Wednesday also voiced their disagreement. They said the NBTC should not use taxpayers' money to pay RS for the telecast rights.

END_OF_DOCUMENT_TOKEN_TO_BE_REPLACED

QUEK SOO BENG: MDA should explain why other nations can charge lower prices for World Cup

To end the controversy over World Cup pricing here, the Media Development Authority should, most importantly, explain how and why other football-crazy countries are able to view the tournament on free-to-air and/or pay-television at a fraction of the cost charged in Singapore. It has been reported that the next-highest price being charged elsewhere is about half the price here.

END_OF_DOCUMENT_TOKEN_TO_BE_REPLACED

Three months before the World Cup 2014 is due to kick off in Brazil, SingTel announced yesterday it has secured the broadcast rights, soothing the nerves of football fans who had to wait until just weeks before the previous tournament to know if they would be able to watch the games on television. Fans will be able to watch all 64 matches for a one-time price of S$105, excluding Goods and Services Tax (GST), said SingTel, which is also finalising arrangements with StarHub to let its customers access the matches as, under the cross-carriage rule, exclusive pay-TV content has to be offered to customers of rival providers. The price is up to 59 per cent higher than what fans had paid to watch the previous World Cup in 2010, which was broadcast by SingTel and StarHub under a joint bid.

END_OF_DOCUMENT_TOKEN_TO_BE_REPLACED

The many ways we played soccer as kids

It is safe to say that many Singaporeans have played soccer at one point or another, whether it was during PE lessons on the school field, at the void deck or even your living room. While I now indulge in the occasional Sunday soccer sessions with a proper size 5 ball, I still fondly remember the many different and ingenious ways my friends and I played Singapore’s favourite sport.

END_OF_DOCUMENT_TOKEN_TO_BE_REPLACED

Billionaire Peter Lim, 60, is still in the running to acquire Spanish Primera Liga side Valencia CF. This comes barely a week after Spanish and local media reported that the Singapore businesman had failed in his bid to acquire Valencia.

END_OF_DOCUMENT_TOKEN_TO_BE_REPLACED

It must be a case of déjà vu for Singapore billionaire Peter Lim, who has failed yet again to purchase a top European club. According to Spanish newspaper Marca, the 60-year-old has failed to make it through the final round of bidders interested in buying debt-stricken Spanich club Valencia. Lim placed a bid for the La Liga side in December, promising to clear the club’s debts and enable the completion of the construction of their new stadium, as well as providing a transfer fund of €50 million (SGD$87m) to invest in new signings.