I have written many times about Zai Shun, but it occurred to me one day that I have never actually written about their Curry Fish Head before!  They are, after all, called Zai Shun Curry Fish Head right?In my opinion, Zai Shun is the 2nd best place in Singapore to go for super fresh steamed fish.  I am still looking for the best.  Not only do they carry a fantastic selection of fish that you would not be able to find anywhere else, they also sell it at an incredibly competitive price.   So one day, while I sat daydreaming as I often do.  It occurred to me that in my search for the best Curry Fish Head around, the emphasis has always been more on the curry than the fish.  You see, most places use either Ang Goli or Ang Zhor to cook the fish head curry.  The only thing differentiating the different places is the size of the fish head, the curry gravy and the price.  Then I thought, since Zai Shun has such fantastic fish, won't he be able to make a fish head curry using a fish that I would not be able to find anywhere else? 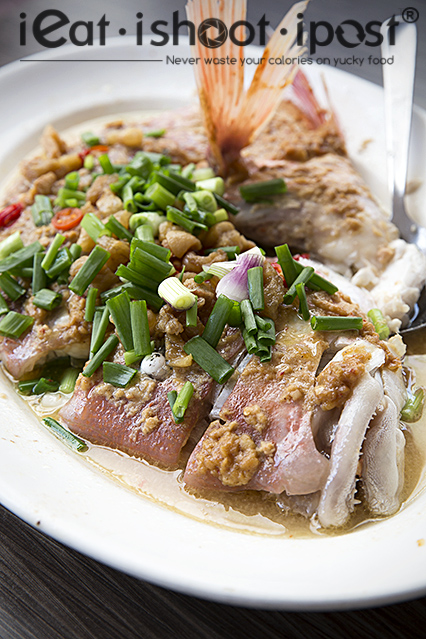 Red Snapper Fish Head steamed with Tau Cheo ($25 half head)So I gave him a call to organize a fish head fest.  I told him that I wanted to organize a meal with fish head is the theme and I wanted one of the dishes to be Curry Fish Head.Now, I am sure that there are readers out there who are not really into heads.  Well, that can change.  Over the years, I too have come to appreciate the wisdom of our Chinese forefathers.  For the Chinese, fish fillet is too homogenous and thus monotonous, unlike the textural complexity of the head.  When you have a large fish, eating the various parts of the head is like having a buffet of textures.  Here is where you find the whole gamut of gooey, sticky, collagenous textures that make for a more interesting gastronomic adventure.  Besides that, the head of the fish is much sweeter than the flesh.  Try making a fish stock using the head and you will immediately realize where the real treasure lies!When it comes to fish head bigger is better.  The problem with a lot of Fish Head Curry places nowadays is that the size of the fish head is getting smaller and smaller.  But that is not a problem at Zai Shun.  The boss gave us the head of a large Ang Sai (红狮 - lit Red Lion).  We had half the head prepared as Fish Head Curry and the other half steamed with Tau Cheo (Fermented bean).The fish was superb.  It's a wild caught Red Snapper from the South China Sea and was very fresh, so it did not have any fishy odour.  The kakis who where not really into heads were satisfied with the large amount of flesh around the neck of the fish while the rest of us had a slurpilicious time dis-articulating the head.  The curry was in the assam style which was not overly rich and had a nice tamarind tang.  However, the kakis felt that although the head was of superb quality, the gravy was not the best around as it lacked a certain level of ooomph.  4.25/5The other side of the fish head was steamed and then topped with fermented beans and a generous handful (or two) of crispy pork lard.  You can really taste the freshness of the fish when it is cooked this way.  But I still prefer the Cantonese soy sauce steaming style.  4.25/5 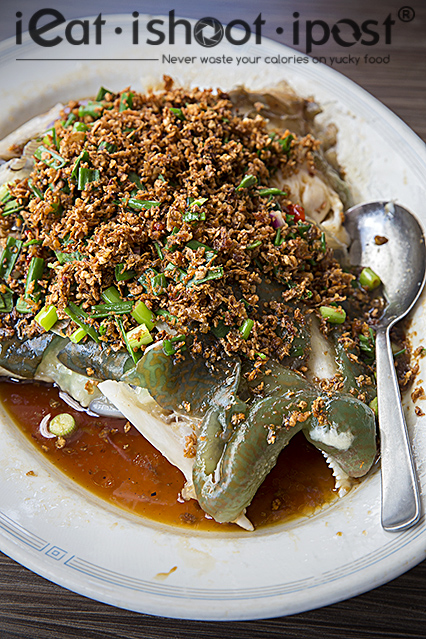 Steamed Soo Mei Head ($70/kg)The boss surprised us with his next dish which was an enormous steamed Soo Mei head.  Now, I have to admit that I am of two minds when it comes to this fish.  On the one hand, I avoid ordering it because of the fact that the Napoleon Wrasse is on the red list of endangered fish.  On the other hand, I have always been curious as to why it is so popular amongst fish head enthusiasts.  It's the same dilemma I face with Bluefin Tuna whenever I eat sushi.Having tasted the fish, I now understand why it is so popular.  The flesh is very fine and the head is full of gelatinous bits which any fish head lover would appreciate.  The garlic and soy sauce also complemented the fish very well.  It is certainly something that I look forward to eating if not for the fact that it is endangered.  I will just have to settle for the one time experience and look for other more sustainable source of fish heads.  4.5/5ConclusionZai Shun is one of the best places to eat steamed fish at great prices.  The Red Snapper head was excellent, though next time I would just go for the Cantonese style steaming sauce. 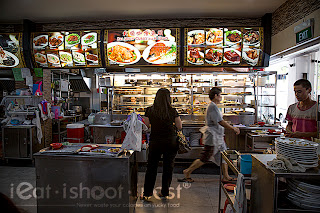