Advertisement
Even when he was rooting for the Opposition, the Pundit never liked Kenny Jeyaretnam. Many politicians have an exaggerated sense of their importance in the grand scheme of things. Kenny J is one of them. The Pundit finds his public persona pompous and abrasive. He comes across as a man with an axe to grind against the PAP rather than someone who genuinely cares for the welfare of Singaporeans. Last year when Kenny's party called on the Government torepatriate all Indonesian workers in retaliation for the haze, the Pundit gave thanks to the 72,563 West Coast GRC residents who voted for the PAP in 2011. Their votes blocked Kenny and Co. from getting into parliament.  May the Reform Party never be allowed to form the Government.
So as we all know, Kenny J recently gatecrashed a CPF Dialogue for the residents of Bishan Thomson, organized by its MP Hri Kumar Nair. Weeks before the dialogue, Abdul Malik Mohammed Ghazali, who is not a Thomson resident, had asked to attend the event. Hri Kumar graciously agreed. A full five days after the exchange, the Secretary-General of the Reform Party hopped onto the bandwagon.

Hri Kumar did not respond and Kenny saw this as an agreement: 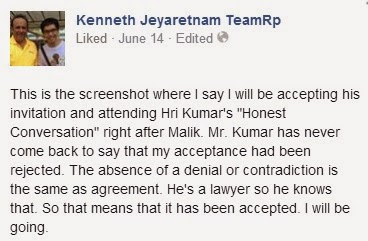 During the Dialogue, there was an address by the MP, a talk by a CPF expert, a breakout session and a Q and A, during which Hri Kumar and Kenny J had an awkward moment. This was overshadowed by retiree Renee Yap's plea for her money and the subsequent storm about Ms Yap living in landed property and the debate about whether her privacy has been breached.

After that dialogue, Kenny dashed off a heated note entitled:

"8 (Intellectually) Dishonest Things About Hri Kumar’s Honest Conversation" in which he complained that he was "shouted down" by several people who appear to have been planted in the audience. How did he know that they were planted? Did he see them exchange the secret PAP Internet Brigade Handshake?

Interestingly, the word "Intellectually" appears to have been subsequently added. It is missing in the post's URL and when The Online Citizen - that bastion of free speech - shared it on 16 June, the title was "8 Dishonest Things About Hri Kumar's Honest Conversation" 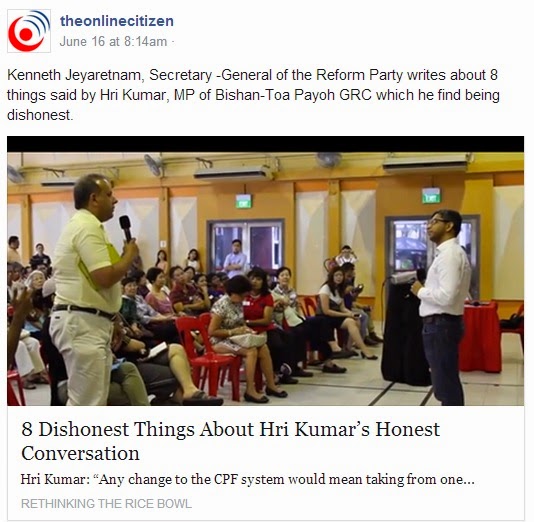 So did Kenny mean to say that Hri Kumar is a dishonest person? The Pundit trusts that readers are intelligent enough to make up their own minds.
After days of silence, Hri Kumar finally responded with "Disruptive Politics" a meticulous, lawyer-ish point by point defence. The Pundit did a bit of research and found that Kenny has indeed been a naughty boy.
Advertisement 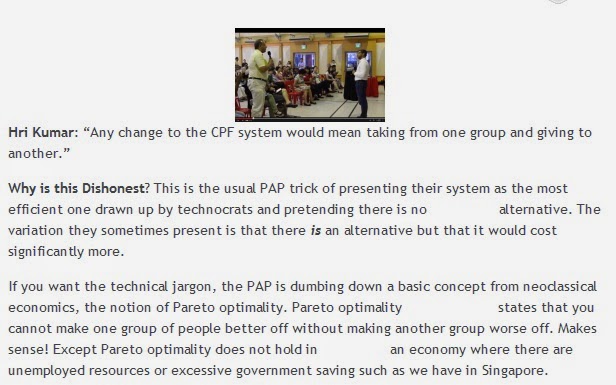 The Pundit found an audio recording of the Dialogue uploaded onto YouTube by a Mr Ernest Pak. What Hri Kumar actually said was:

If you have a proposal where you want any particular group of people to take on more risks..(corrects himself) to get more, then we have to recognize that if we want one group to have more we will also have to recognize that one group will get less. So I think let's be honest about it. But that's not wrong. There are no wrong answers there. If you think that the older generation should get more. That's fine. That's a valid view to take. But you also have to address and identify who do you think have to sacrifice so that others will get more.

In "Disruptive Politics", Hri Kumar clarified that he was referring to weighing CPF payouts: "What I really said was that if the Forum participants proposed higher payouts for some groups, then other groups will have less. I did not say that “any change” would mean taking from one group and giving to another. That is ridiculous." It is ridiculous. Kenny did a Reductio ad absurdum sleight o' hand there. Hri Kumar did not mean to say that changing the CPF system involves dipping into one group of people's money to give to another group. The notion doesn't even make sense.

Here's another example of Kenny's distortion of what Hri Kumar said:

Here is what Hri Kumar said:

Hri Kumar went on to say that wanting to manage your own money is "a perfectly legitimate point" but there will be a fairly sizable group of people who will run out of funds and they still need to live and "as a nation we will have to make sure that no one suffers." Anyone with a decent level of Comprehension can see that Hri Kumar didn't even remotely suggest that Singaporeans would "inevitably" squander their money away.
In "Disruptive Politics", Hri Kumar claims that Kenny J attributed statements to him that he has never made. By now it should be clear that Kenny has been a naughty boy, playing fast and loose with Hri Kumar's words to score political points. Will that Kenny show up at the CPF dialogue that Kee Chiu will host next month? As we say in Singapore: Akan Datang.