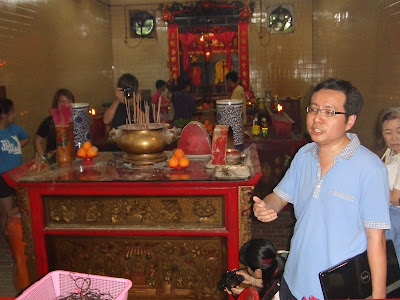 Members were brought to the time some hundred years ago when this was a swamp with small cottage industries like sago productions. This place was known to the residence here as Sar Kong 沙崗. According to Bro Yik Han, he traced the origin of the temple and its movement from its original site to what is present today. There were some renovations to the temple, more to make for easy maintenance but alas, could have covered some beautiful and important aspects of the temple design. 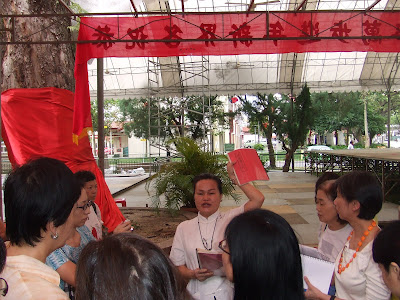 Master Wong and I shared with the group the various interesting aspects of taoist practice in the temple, such as the green dragon door and the white tiger door observed by the Taoists when entering into the temple. One should not step on the “ridge” of the door way in respect to the door gods. 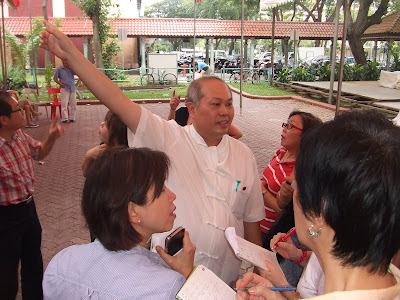 There were many interesting questions as Bro Yik Han, and later I took the group through the places within the temple. In the Cantonese temple, when offering joss papers to Tu Di Gong 土地公as the main patron deity of this temple, one could see the paper walking stick being offered as well. The visitors looked with interests of the beating of the bell and the drum. I told the group because of space constraint, the drum and bell were placed closed by. Usually, one would be placed on each side of the temple. The bell would be placed on the right hand side (as you face the altar) with the drum on the left. 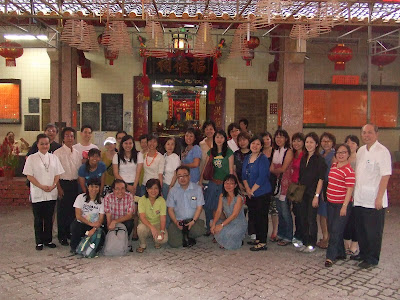 The President of the temple, Master Chin who welcomed us to the temple was very glad of our visit and hopes that more Singaporeans would get to know and visit the temple. He told the group that this temple is famous for its “fire dragon”, maybe the only one in Singapore. This year, being the third year since the last performance, was to be the year when they would be performing the fire dragon. Alas, because of the flood in China, there were insufficient straws for the making of the dragon. They use the rice straws to make the dragon and then devotees would put their big joss sticks into the straw body of the dragon. When the dragon dance troupe performers roll the dragon one could see the simmering lights and the fumes.