Several people sent me emails regarding an economic pending bust in Singapore.

Given that it's easy enough to accept or discard such ideas based on preconceived notions, I asked a friend who lives in Singapore for his comments.

First, please consider the article Why Singapore's Economy Is Heading For An Iceland-Style Meltdown.

Like Iceland in its heyday, Singapore’s economic stability and vitality – on the surface at least – has made it the envy of the world at a time when most Western economies are languishing with feeble growth, and high rates of unemployment and poverty. Singapore’s booming finance and real estate-focused economy has earned it the moniker “The Switzerland of Asia”, and finance professionals from all over the world are flocking to work there to take refuge from the hard-hit financial sectors in their home countries. Singapore’s unemployment rate is a mere 1.8 percent even as the country’s red hot construction sector has been attracting overseas workers, and a growing number of wealthy citizens are hiring domestic helpers from neighboring countries like the Philippines and Indonesia. The ranks of Singapore’s wealthy are growing rapidly thanks to the country’s asset bubbles, which is helping to fuel a luxury consumption boom in everything from high-end apartments to exotic supercars.

Even though Singapore is no longer an emerging market nation, I consider its bubble economy to be part of the overall emerging markets bubble  that I have been warning about due to its strategic role and locationin Southeast Asia, which is also known as ASEAN (Association ofSoutheast Asian Nations). My recent reports on Malaysia, Thailand, the Philippines, and Indonesia show that the entire region is caught up in a massive bubble, and Singapore is benefiting from this bubble by acting as ASEAN’s financial center.

Extremely low interest rates in the West and Japan, combined with the U.S. Federal Reserve’s multi-trillion dollar quantitative easing or QE programs resulted in a $4 trillion torrent of speculative “hot money” that flowed into emerging market investments from 2009 to 2013. An international carry trade arose in which investors borrowed significant sums of capital at rock-bottom interest rates from the U.S. and Japan, and directed the proceeds into high-yielding emerging markets assets with the intention of profiting from the difference in interest rates or the spread.

Hot money inflows, combined with central bank policies that allow currency appreciation to temper inflation, have contributed to an approximate 22 percent increase in the value of the Singapore dollar against the U.S. dollar since the financial crisis: 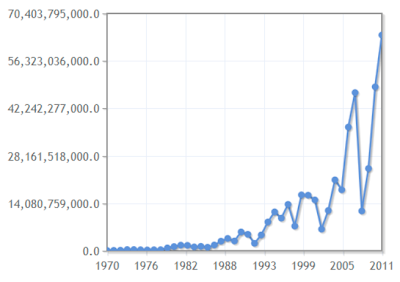 Why Singapore Has A Dangerous Credit Bubble

Like many countries that have experienced economy-wide bubbles and busts – including the U.S. from 2003 to 2007 – Singapore currently has a ballooning credit bubble that is helping to drive economic growth and create an illusion of prosperity. Ultra-low interest rates are the primary reason why credit bubbles inflate in the first place, and Singapore’s bubble is no exception to this pattern.

Hype or Reality?There is much more to the article, but what appears above is sufficient to understand the claim.While I do not have firsthand knowledge regarding Singapore, one of my regular contacts "Richard" lives there. I sent Richard the above link and asked about his views.He responded ...

It's very funny you should have sent me this. Not ten minutes ago I read the attached article in the daily paper refuting the exact same article that you sent.

Unfortunately, your article is accurate and the daily paper is delusional.

When I arrived in Singapore in 2009 and secured a realtor to help me find an apartment, he told me that Asians were coming from all over the continent with large wads of cash in hand, begging him to find some property. Anything. Anywhere. All they wanted was some property in Singapore to invest in.

When the Asian meltdown comes, it will be catastrophic for prices of everything in Singapore. And I think it's teetering on the precipice.

Hope that answers your question!