The Government will introduce the Progressive Wage Model ("PWM") in the cleaning services sector.It will legislate cleaning services providers to pay their staff an entry-level salary of $1,000 per month, and subsequently give staff increments in tandem with their skills upgrading.The median gross monthly wage is about $850 currently.

A similar PWM will be implemented in the security services sector once the tripartite partners (i.e., the Government, NTUC and employers) reach a consensus.

The PWM is nothing more than a series of minimum wages to be paid to a worker, depending on his skill level, as illustrated in the following diagram[2]. 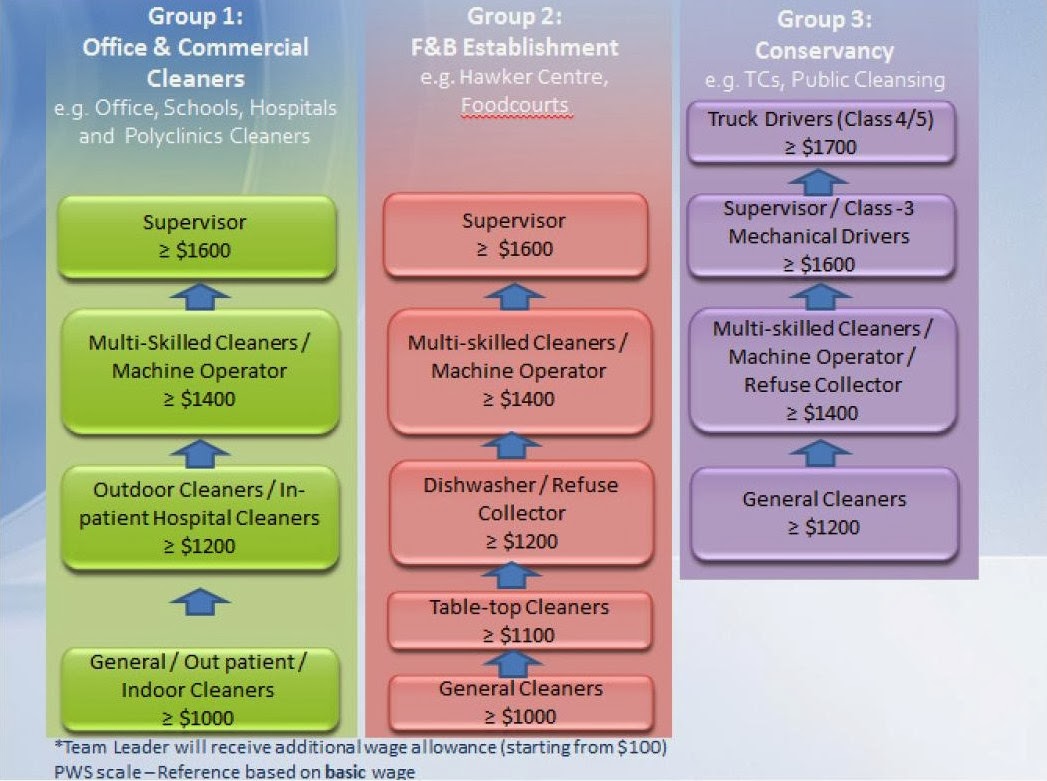 In most European countries, high minimum wages have been accompanied by high unemployment, with the most severe impact falling on people with the lowest skills. Politicians are keen to take the credit for raising minimum wages, without accepting responsibility when those with low skills and experience are unable to find an employer at the minimum wage. Youth unemployment now exceeds 20 per cent in much of Europe including its more successful economies.

The US is an even better example, because its minimum wage is much lower than in Europe, and the US labour market is also more flexible. The US Congress is debating whether to raise the minimum wage, as a way to help the poor and reduce growing inequalities. But a higher minimum wage will help some people while hurting others, and the poor will typically not be the ones being helped because the majority of the poor are unemployed, not at work. Higher minimum wages will reduce their opportunities to find an employer, not help them. On the other hand, more than a third of those who actually earn the minimum wage are teenagers, many of whom come from better-off families. The average family income of teenagers who are on the minimum wage is in fact well above the national average for all families. A higher minimum wage therefore does little in practice to improve opportunities for poor families, or to reduce social inequalities.

While the PWM has a ladder up which a worker may progress as he improves his skills, the PWM is essentially a minimum wage model, albeit one that is applied to specific sectors — in this case, the workers employed by the cleaning service providers.

Mr Shanmugaratnam did not explain how cleaning services sector (and other sectors in the future) that have PWM will not face the problems of a national minimum wage regime that he so eloquently described.

Singapore is different from Europe or the US because the citizen unemployment rate is low. If the Government does not relax the restrictions on immigrant labour, companies will have little choice but to employ the low-skilled citizens at the minimum wage.

A caveat, though. A person is considered to be unemployed only if he satisfies all of the following conditions during the one week preceding the date of the manpower survey interview: (i) he did not work; (ii) he was available for work; and (iii) he was actively looking for a job. It is not known how many people are not considered to be unemployed simply because they are not actively looking for a job during the crucial one week of the manpower survey interview. For a detailed discussion on concepts of employment, unemployment and economically inactive, see [What the Unemployment Rate Means].

Not Political Decree
Mr Shanmugaratnam stressed that the Government is not setting wages by political decree:
[T]he progressive wages in these industries will also be determined through tripartite negotiations. We are not setting wages by political decree. What legislation will do is ensure that the PWM that the tripartite partners work out is actually implemented in these industries. This tripartite approach, and especially the involvement of both unions and employers in setting appropriate wages and a wage-skills ladder, is important. It reduces the risk that workers, especially our older and more vulnerable workers, will lose their jobs as wages go up.
While it sounds nice on paper to say that the minimum wages in the cleaning services sector were determined through tripartite negotiations, the so-called tripartite approach did not involve all the cleaning services providers.

Which is why the Government has to pass legislation to ensure that the PWM is implemented by all the cleaning services providers.

It is worthwhile noting that in almost every democratic country, the national minimum wage, if any, is legislated after consultation with the stake holders.

Licensing
The Government announced in the Committee of Supply debate 2013 that all cleaning companies (presumably, it means the cleaning services providers) would be licensed this year to uplift standards more widely across the industry. Key licensing requirements include mandatory training courses and adoption of the PWM for cleaners.

Apart from the cleaning and (in the future) security services sectors, will PWM be made a licensing condition in other sectors? Will sectors that have no reason to be licensed be subject to licensing just so that PWM may be implemented in those sectors?

There is little justification for imposing PWM as a licensing condition for cleaning services providers, or for any other business. Notwithstanding the merits of PWM or minimum wage, the Government should explain how such action falls within the reasonable ambit of its regulatory authority.

Exceptions
Cleaners who are not employed by licensed cleaning services providers will not be covered by the PWM and its minimum wage.

According to media reports, the tight labour market has forced cleaners' wages above the lowest minimum wage of $1,000 prescribed under the PWM[3].

Clearly the easy availability of cheap migrant labour had restrained wages of citizens.

2. Recommendations of the Tripartite Cluster for Cleaners on Progressive Wages.