A netizen has shared this post about staying in a famous hotel in Singapore.

Okay, that’s out there. Here’s a little backstory before I go into the official content of this post.

I started seeing spirits since I was 7. And as time passed, I started to see more violent spirits and as a result, I was made to wear a Catholic scapular around my neck everytime I leave my house. This was to prevent the spirits from coming near me, as told by a priest.Though the actual use of the scapular is to show devotion, it did help me deter those spirits away. I felt safe and those spirits never came near when I had the scapular on.

(For my non-Catholic readers, http://www.catholicdigest.com/articles/faith/heritage/2009/01-01/discover-the-secrets-of-the-scapular)

The scapular is a necessity to me. So you can imagine how paranoid I was the day I went for a staycation at a hotel (well-knowned to be haunted) without my scapular. I wasn’t sure where my scapular had gone but I was sure I left the house with it.

It was New Year’s Day and my friend’s family had booked a club suite (that came with a butler) to celebrate the new year. I went over in the evening. The room was big, but it was missing the media room that we used to have whenever we booked the club suite.

This time, instead of the media room, a pool table had taken over the space. My friend (let’s call her Y), her sister and her kid were in the room having dinner when I stepped in. We waited for another friend, C to come over before we started drinking and chatting like a usual staycation. It was a normal night, I would say. We laughed, chatted and drank with nothing weird happening.

Y’s sister had her friends over to play cards and soon, it was 3+ a.m. when we got tired, yawning and all. While Y’s sister’s friends were still playing, we decided to head to bed. Y’s sister and her son, Y, C and myself slept in the bedroom.

So the bedroom had a king-sized bed where Y and her sister and the kid (he’s 2+) slept. We had asked for an extra bed where C slept, as she had work the next day. There was also a chair where I slept.

It was uncomfortable. Extremely uncomfortable. I was supposed to sleep outside in the living room with C on the bigger couch but because Y’s sister’s friends hadn’t left, I decided to just sleep in the bedroom. It was about 4:15 when one of the friends came in and told me to go outside to sleep because they were leaving. I did.

So this is where things got a little creepy.

I settled myself on the couch outside, alone with all the lights on. After a few seconds, I decided to turn the lights off, leaving the toilet light and the table light on. Where I was sleeping, flat on my back, I had the toilet/kitchen area on my left and the balcony on my right. (I will explain in a while why I had to say this)

I curled to my left and tried to sleep but I could see slight flickering behind my eyelids and when I opened my eyes, it was really flickering. The hotel is a 5-star hotel and it shouldn’t be flickering. Even if it did, why now? The entire night it was okay but why now? At that point, I hadn’t expected it to be something supernatural-related.

I got a little annoyed at the flickering so I got up and turned the lights on again, in hopes that it would stop. But it didn’t. I tried to sleep, and was falling deep into sleep when I heard a sound. Knocking. It was someone knocking. I cracked opened my eyes, thinking that I could’ve dreamt the sound but the knocking came again.

I stood up groggily, walked to the door and checked the peephole. I thought it was the butler (who would knock when they needed to pass the guests something in the late night), but no one was out there. It was quiet. I shook my head and passed this off as my mistake. I must’ve dreamt it, I thought.

I went back to the couch and tried my hardest to fall asleep, facing the balcony. I knew a few minutes had passed. But I couldn’t sleep. My eyes were tired but my mind was awake. I sighed deepy. When I slowly opened my eyes, and my surroundings settled in on my vision, I gasped. I gasped at what I was looking at.

As realisation dawned upon me, I sat up abruptly. I was 100% sure I was facing the balcony when I dozed off. I couldn’t have turned in my sleep, if that was even me sleeping. I would’ve known that I turned my body. That was when I knew I couldn’t pass this off as anything. There was something weird going on. Definitely something.

I felt my heartbeats quickened as I clutched my neck. “Shit,” I spat. My scapular. It wasn’t around my neck. I looked everywhere and didn’t see it. I had lost it. I panicked even harder. Murmuring every prayer I could remember to calm myself down. Slowly, I started to relax. I convinced myself that this was nothing.

Taking a deep breath, I spoke aloud, “I’m very sorry for disturbing you. I will be leaving in the morning. Please just let me sleep peacefully now. I promise I’ll leave in the morning.” I did this because of what my grandmother used to say. She told me to ask for permission from the spirits if I needed to be excused and that they would grant me it if I was being nice.

It was silent and the flickering seemed to have ceased by abit. I laid back down and closed my eyes. This time I faced the kitchen area. I slept for what seemed like 5 minutes before I sensed something behind. It was a weird feeling. I knew something was near. And it was coming closer. I opened my eyes slowly, afraid to sit up or to look behind.

I knew something was behind me. I begun to pray but the lights started its intense flickering again, making me stop. I squeezed my eyes shut and suddenly, I heard a a chuckle. A little girl’s giggle, “Hehehehe.” High pitched, playful and somewhat chilling from behind my right ear. She was close. So, so close.

Now, if it was a little boy’s voice, I could’ve pretended that it was Y’s nephew who was in the room. But it was a little girl’s voice. In an unnaturally high-pitched tone.

In the fatest speed I’ve ever had, I grabbed my bag off the floor and my phone off the table, put on my shoes and left, without looking back. As I texted Y, I caught a glimpse of the time. It was 5:40a.m. and the train would only start operation in 50 minutes. With my pyjamas, my bag and bare face, I sat at the lobby until the first train started.” 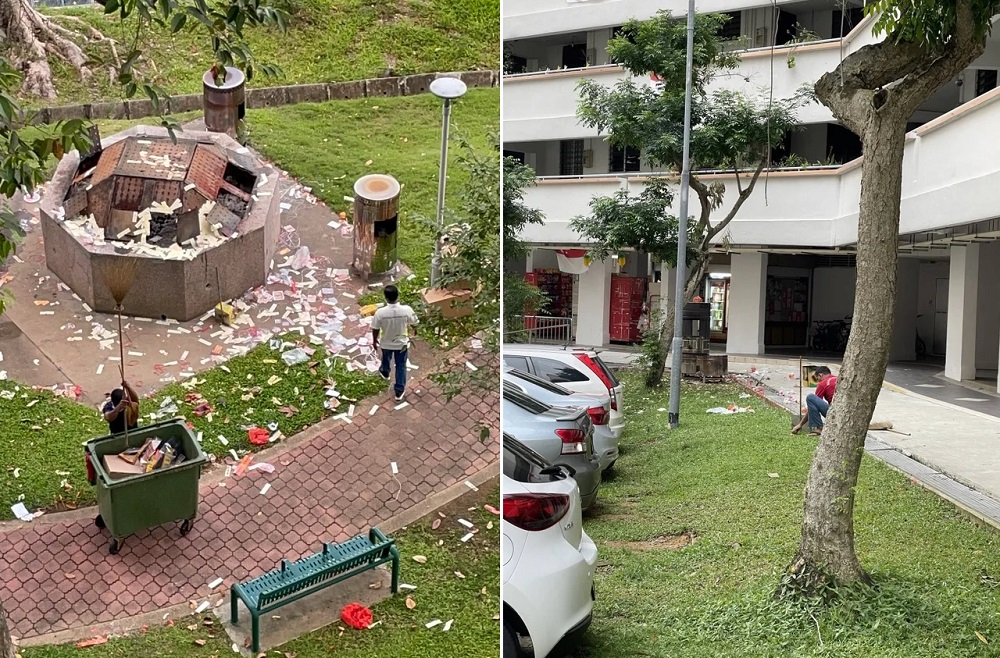 MAN BRINGS COLLEAGUE TO FISHING SPOT AT UBIN, HE WAS NEVER THE SAME AGAIN