Hi there,
There have recently been several news stories about nature photographers behaving badly, including the incident at Tuas where a photographer tied down a baby bird to photograph the parent feeding it, as well as the time when several photographers were caught on camera using poisoned fish to bait an endangered eagle.
Although these may sound like isolated incidents, this bad behaviour, especially the illegal use of bait, has been going on for a long time and several nature photographers are part of an organised group that plans and executes baiting operations in our parks and nature reserves.
In particular, the Facebook group that calls itself the "Birds, Insects, N Creatures of Asia" is one of the main culprits behind the widespread use of bait to photograph wild birds. This group is led by one Jeremiah Loei, and has approximately 6,000 members in the groups including several prominent members such as ministers and senior civil servants. While most of the members of this group likely do not use bait, there is a core group of members who are part of a private WhatsApp chat group formerly called the "BICA Bird Radar", then the "BICA Sightings N News", before the WhatsApp chat was disbanded over fears of spies inside the group leaking information outside. This WhatsApp group was used to organise baiting sessions and to evade NParks enforcement for their illegal and harmful behaviour.
This group was recently responsible for the continuous baiting of the Hooded Pitta and the Siberian Blue Robin at the Singapore Botanic Gardens in February 2015, where they used mealworms to bait the two birds for a long period of time. 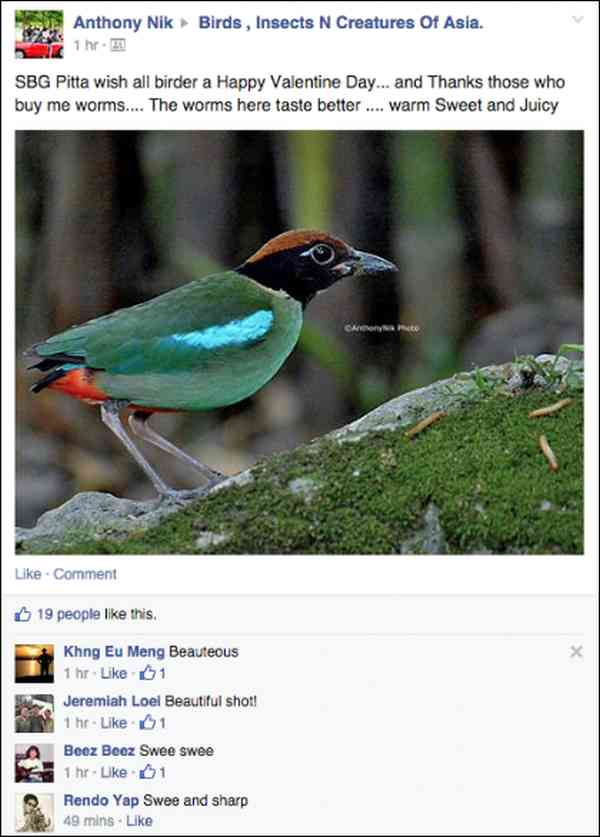 This group was also responsible for baiting the Black-backed Kingfisher in Feb/Mar 2014, where they used frogs to bait the rare kingfisher at Venus Drive. They did the same with the Ruddy Kingfisher at Bidadari more recently in Oct/Nov 2015 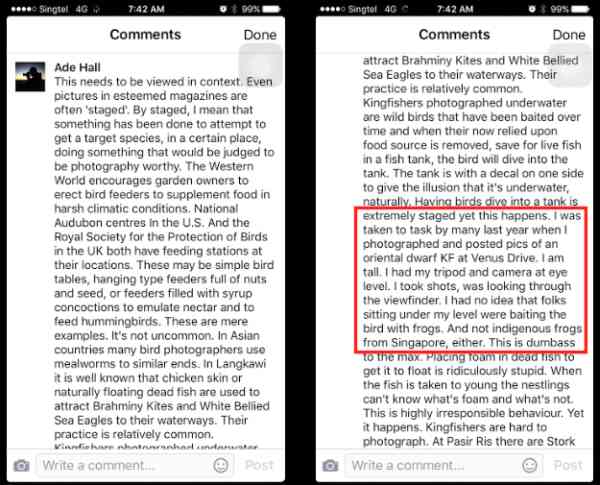 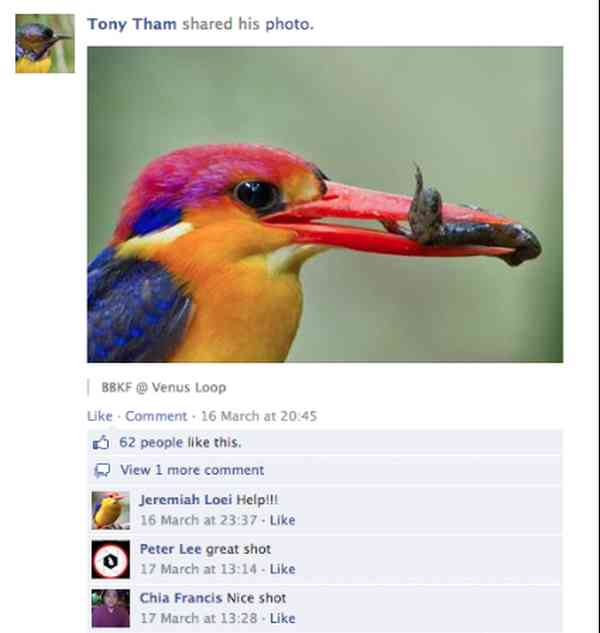 In addition, the senior members of the group, including Jeremiah Loei, have been encouraging other people to use bait as well as set up 'studios', which are areas that have been artificially cleared of vegetation and other obstructions so unethical photographers can have a clear shot at the bird. These studio sites are also littered with bait such as mealworms, crickets, frogs, and other live animals and is a completely artificial setting for photographing birds. 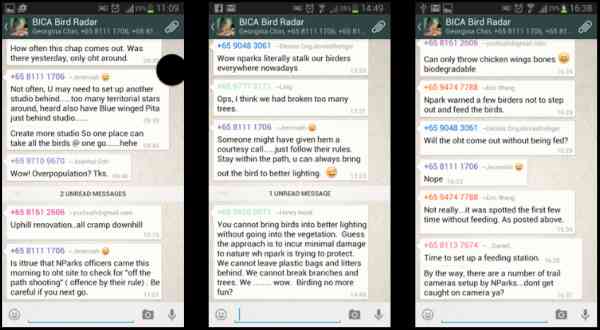 These photographers have also been circulating photographs of NParks officers so that they can take evasive action when there are enforcement officers around. In addition, they have also tried to petition NParks to set up feeding stations within the parks and nature reserves, which is basically asking NParks to break their own law. 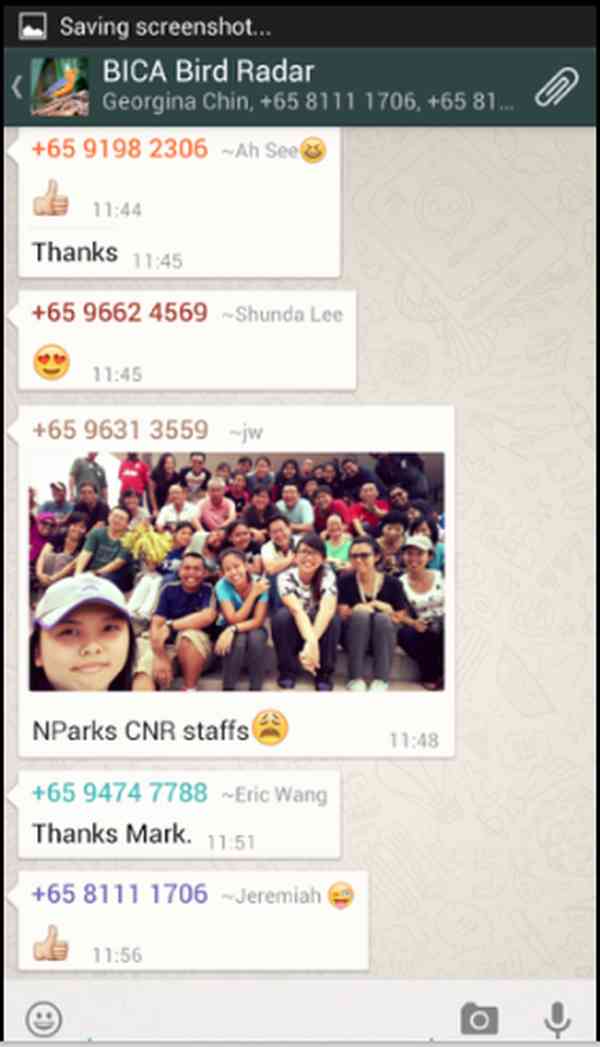 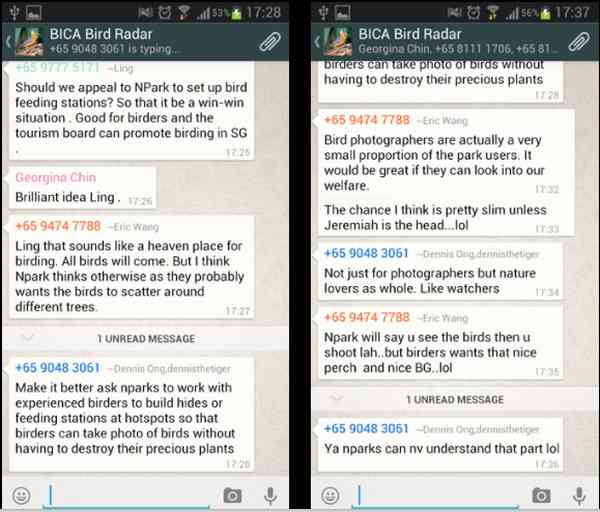 These photographers have also been responsible for other examples of animal cruelty. For example when an undesirable animal such as a lizard comes to eat the bait they've laid out for other birds, they will throw stones and sticks at the animal to chase it way. This also happened at Hindhede Park when they were baiting the Orange-headed Thrush, and they threw sticks at the nationally endangered White-rumped Shama to chase it away when it came down to eat some of the mealworms.

One more thing. Regarding the famous incident with the baited eagle at Bukit Batok, one of the photographers responsible was actually from this BICA group as well, and this practice has apparently been going on for a while now. There are photos from BICA showing eagles picking up exotic fish from various locations, some of which shouldn't be there at all, like the photo of an eagle catching a shark from a freshwater pond below. 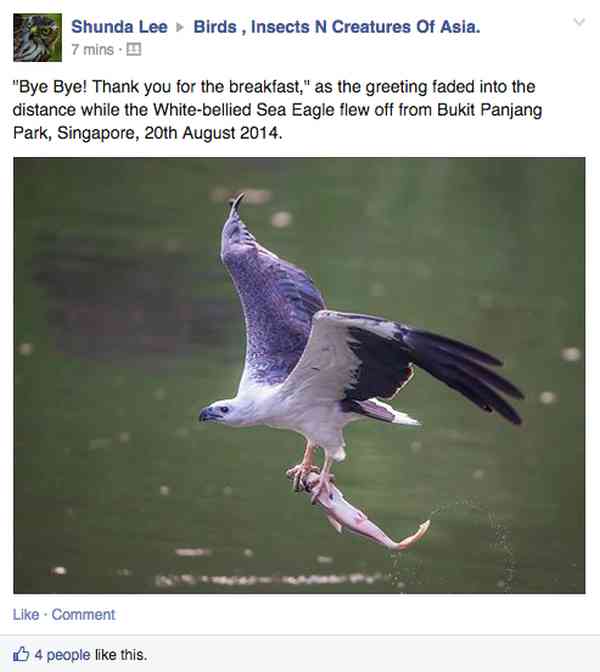