“The world did not start in 2011,” Deputy Prime Minister Tharman Shanmugaratnam said recently. His irritation was palpable, and probably justified: it is true that policies he masterminded to tackle Singapore’s growing income gap predated 2011, contrary to cynical claims that they were nothing more than a rearguard reaction to the Opposition’s advances in that fateful year.

Indeed, for better or for worse, it is a fundamentally unchanged People’s Action Party that is seeking a new mandate in 10 days’ time. This is still a PAP that will do whatever it takes to ensure the Republic’s relevance in a global economy and the party’s dominance over the Republic; one that prides itself on reliable performance, and protects its power with a vengeance. Yet, there’s no doubt that the 2011 setback forced it to reassess its approach to politics. It needed a strategy to ensure that the inroads the Opposition made in the last GE would not be repeated in the next.

Looking back at its actions over the last four years, it is possible to reconstruct the key moves contained in PAP playbook:

1. Take emergency steps to meet people’s practical needs. Put more buses on the road, ramp up the supply of HDB flats and make homes more affordable. Stop denying that policies were failing the people: ultimately, you can’t argue with votes. So, clear all policy roadblocks, unlock resources, and show tangible improvements as soon as possible.

2. Side more with Singaporeans. The government can’t slam the brakes on immigration without crashing the economy. But since the flood of foreigners was Singaporeans’ number one source of unhappiness, the PAP government has to show it is tightening up. It can also offer more symbolic concessions at no economic cost, like allowing more Singlish and dialect.

3. Socially, inch decisively to the left. Fortunately, Cabinet has a world-class finance minister who actually knows what he’s doing. Let him continue with the reforms he started with WorkFare, relieve people’s anxieties over medical costs, and give senior citizens their due. If anyone can strike that elusive balance between social justice and fiscal responsibility, he can. 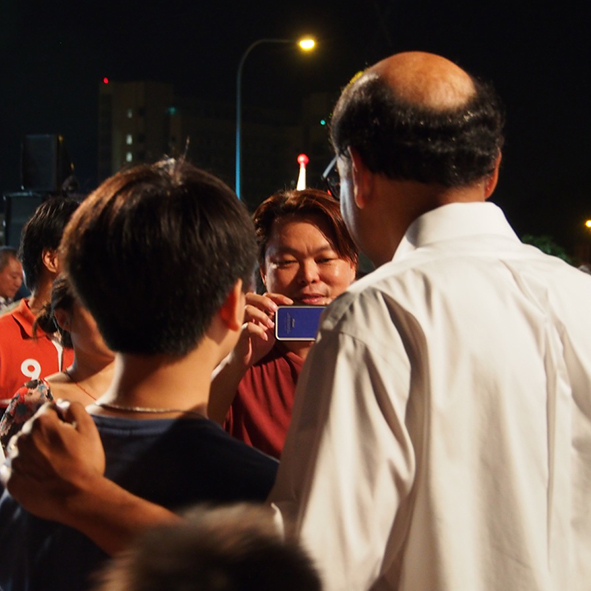 A little to the left, please. – Picture by Cherian George

4. Push community involvement in lieu of political engagement.Singaporeans are growing a social conscience, so promote a culture of participation at the grassroots. Position PAP MPs as problem-solving “chief social workers”. Thus, divert the energies of caring citizens towards safe community work, and away from more troublesome political activism. They should render aid to Singapore families, not attempt reform of the Singapore system.

The biggest shift in thinking was on social policy. … On the political front, though, its approach could not be more different, refusing to concede much ground, and it might even have dug in some more.” – Han Fook Kwang

5. Attack Opposition MPs on the municipal front. Keep Workers’ Party MPs busy defending their management of their town council, so that they have no time to do groundwork in PAP constituencies. GRCs are won by small margins. So if the allegations succeed in causing just 10% of swing voters to think twice, the PAP will hold those seats.