Someone pointed out to me that PAP's AMK GRC candidate – Darryl David, who's Indian by birth and is the minority candidate for the GRC, is unable to speak any Indian language. Now GRCs were 'supposedly created by PAP demi-god Lee Kuan Yew' to ensure minority representation in Parliament. This was despite the fact that minority candidates can win seats on their own. Obviously we can then safely assume that GRCs are merely a vehicle for weak and unappealing PAP candidates to enter Parliament via a backdoor. Will the real Darryl David please stand up and talk to us fluently in any 1 of the main Indian languages, preferably Tamil. Simply put in a 6 seat GRC like AMK, an opposition party can win 4 of the 6 seats and still not be elected if just 2 of the remainder poll very highly for the PAP. But let's look at the criteria supposedly declared for GRCs– to ensure minority representation. AMK GRC has been a seat for minorities other than Malays to stand. Inderjit Singh and the late S Balaji were the 2 former Indian minority candidates. So Darryl David is the replacement in the GRC for Inderjit Singh, as the minority candidate representing the Indian community to ensure they have adequate representation in the House.

The Sikh and Indian communities loses a voice with Inderjit Singh's retirement. His replacement – Darryl David is more interested in speaking in Chinese. Defeats the whole point of the GRC system doesn't it?So the question must then be put — can he converse in any of the 3 or 4 main Indian languages here – Tamil, Hindi, Punjabi or Malayalam? And speak it fluently? I think this is important as both the Indian and Chinese communities here are facing issues with a lack of MPs who can converse in their native dialects or languages. We already have a PAP candidate who lambasted the teaching of dialects as stupid – yet he himself in a desperate measure to ingratiate himself with older voters – spoke in Hokkien. The fact is many younger Chinese are unable to communicate in dialects. I have yet to find a Singaporean below 25 who can communicate in Cantonese. Every time I hear a young Chinese communicate in Cantonese, I will speak to them in Malay – because I know they would be Malaysian. 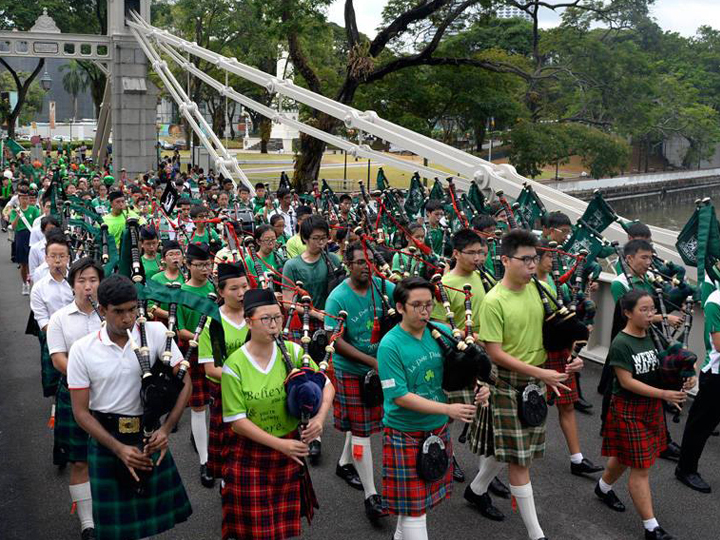 Marching bands and musical instruments are perfectly A-Okay for St Patrick's Day in Singapore, but not alright for Thaipusam. Let's give a big hurrah for the Indian PAP MPs in Parliament!With the influx of foreigners – minorities like Tamils are not amused that their language is fast fading despite being an official language. Even the other Indian minorities like Sikhs and Hindustanis are not amused by what they see is a lack of effort by their elected MPs and Ministers in fighting for their rights. They have only 1 holiday and they are so many restrictions for their cultural events. Processions are not allowed to have musical instruments played in accompaniment. Yet the authorities allowed the St Patrick's Day event in Boat Quay to have such measures. They hardly ever hear their elected representatives speaking in their mother tongues in Parliament or at official functions. And now it appears that Mr David himself, designated as a representative of the community is unable to speak in any 1 of the main Indian languages. How then is he going to be a representative of their community? What cultural links does he have with them? How well does he understand the issues facing the community when he's so far detached from it? In interviews he spoke in Hokkien and Mandarin  I gather – is that how he's gonna represent the community? And don't give me the crap that 1 does not need to speak or be part of a community to speak up for it – if that were so, then please abolish the GRC system, as it defeats the whole purpose of implementing it according to the 'gospel of Lee Kuan Yew' – which was to ensure minority representation.

She dresses like Halimah, but she's no Halimah. Intan Azura's 1st term can be best described as  useless – unless of course, you're Yang Yin. But perhaps she's a duck! Like ducking hard questions and relevant topics like getting the ban on tudungs lifted. But we all know that the GRC system is nothing about that – it's about letting weak candidates in via the backdoor. And Mr David is just a sham representative if he cannot show that he's part of the community naturally – by speaking and breathing it. But who knows maybe the Election Dept and Returning Officer will come to his rescue by declaring that AMK GRC is now a GRC for a Malay candidate, since they already have 'Yang Yin's favourite MP,' Intan as a candidate as well. Nothing the PAP does surprises me anymore. There's always an excuse for any screw-ups or daft mistakes. They're bound to have 1 for Darryl David – Pyramid Game anyone?

People’s Voice Lim Tean: PAP allowing a lost generation of our youth to happen is unforgivable