As a video tribute to former Prime Minister Lee Kuan Yew played on screen, parade-goers at the Padang fell into a solemn silence.
Since the first National Day Parade (NDP) in 1966, the late Mr Lee Kuan Yew had attended every NDP – his appearances were met with standing ovations for the past few years.
This will be the first year that Singaporeans have attended the NDP celebrations without Mr Lee. He died on 23rd March this year aged 91.
Faces were solemn as the tribute video played and some audience members were visibly teary eyed.
In honour of his memory, Mr Lee's usual seat was left vacant this year. A spray of orchids adorned the empty seat. 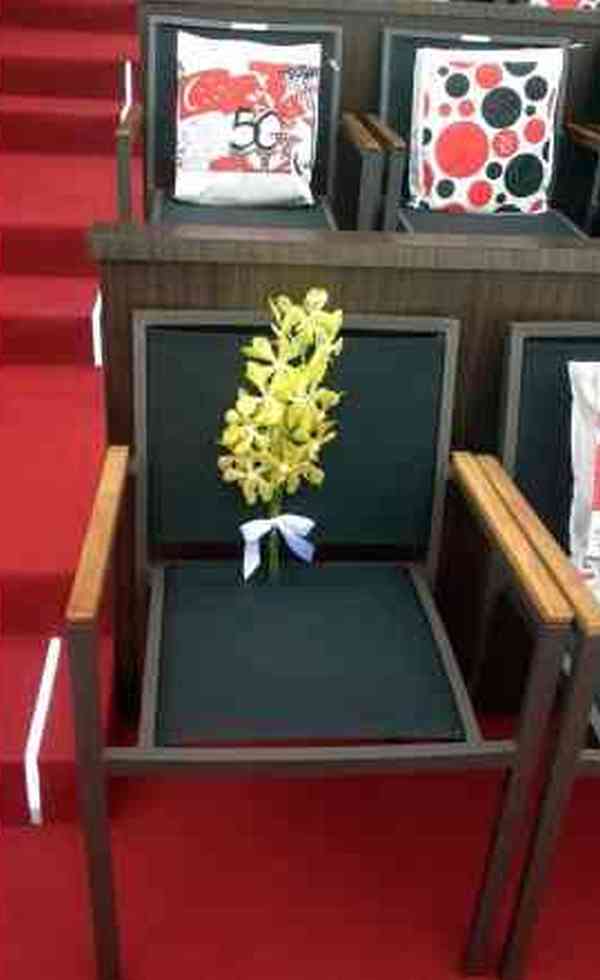 At the end of the tribute film, aerial acrobats The Black Knights soared overhead in a "Five Stars" formation, symbolising the ideals of democracy, peace, progress, justice, and equality.
Earlier today, Singapore heard for the first time a recording of Mr Lee  reading the Proclamation of Independence.
The recording, made in 2012, was broadcast at 9am on local radio and TV channels, and marked at 82 grassroots-led National Day observance ceremonies islandwide. It went on air after the sounding of sirens islandwide.
Three People's Action Party stalwarts Mr Ong Pang Boon, 86, Mr Jek Yeun Thong, 85 and Mr Othman Wok, 90, were honoured at the parade. They are the three surviving Old Guard leaders who signed the official document that marked the independence of Singapore 50 years ago. Mr Lee was one of the 10 leaders who signed the document.
The other signatories were former deputy prime minister Toh Chin Chye, former finance minister Goh Keng Swee, former law minister E.W. Barker, former culture minister S. Rajaratnam, former health minister Yong Nyuk Lin and former national development minister Lim Kim San. Mr Othman, 90, was then the social affairs minister, while Mr Ong, 86, was the education minister, and Mr Jek, 85, was the labour minister.
Share

Hi AllSingaporeStuff, I want to whistleblow about a school principal that shamed her teachers for …