TAN JEE SAY: TIME FOR THE PAP TO STOP SCAREMONGERING

Two days ago, PM told a large audience at SMU that Singapore has to raise the GST from 7 to 20% if we want Scandinavian style benefits to raise the fertility rate. He is wrong. His speech is here
In SingFirst's social safety net announced in February this year, we have provided for Scandinavian style welfare benefits to encourage childbirth such as 90% subsidies on childcare centre fee and child allowances of $300 per month for children up to age 12. In addition, we also proposed a range of other benefits for families by lowering the cost of living such as waiver of all fees from primary one to university, 30% reduction in public transport fares and old age pension of $300 per month for all senior citizens aged 60 and above. The total package costs only $6 billion a year and it can be financed from the investment return of around $8 billion that the government is allowed to use for annual budget spending. There is absolutely no need to raise the GST at all, much less to up it to 20%.
Here's a summary table of SingFirst's safety net package 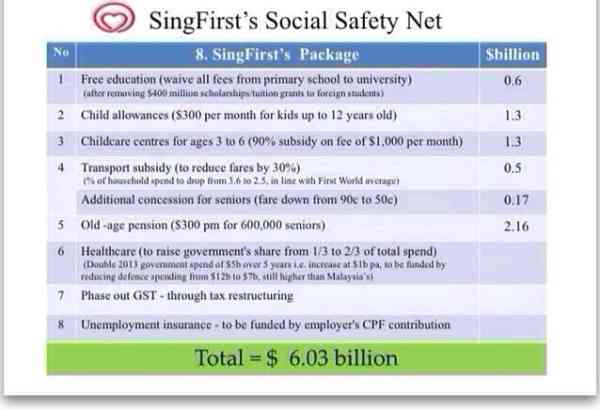 Details of our package are in this posting  SingFirst's social safety net
It is highly irresponsible for a prime minister to simply pluck a figure from the air and use it to scare the people from putting forward their legitimate demands.  Stop your PAP-style scare-mongering to mislead the people. And lay out the facts and figures in full so that Singaporeans can know the truth and engage in a meaningful debate about what the government can do to help them lower their cost of living, raise children, look after the elderly and develop strong families.
Tan Jee Say
Singaporeans First Party
Share