Editor's note: A young, aspiring blogger journalist has shared her articles featuring interviews with Singaporeans from all walks of life on the trial and persecution of blogger Amos Yee. You may read more of her interviews and stories at offbeatperspectives.wordpress.com.
There has been almost little coverage on the public opinions of Singaporeans in regards to the Amos Yee Saga, be it for independent or mainstream news sites.
I went down to the Free Amos Yee rally last Sunday and did street interviewers with curious bystanders, pro-supporters, and even young adults.
This is the perspective of a 17 year-old Muslim girl towards the Amos Yee saga. 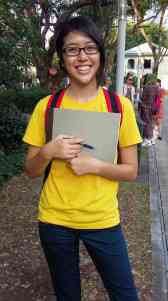 Ranette
Age: 17
Gender: Female
Race: Chinese – Malay (* Mum has Australian blood)
Religious Belief: Muslim
Student
Do you feel he should have said out the same ideas, but just changed the way he say it, like in a more responsible or respectful manner?
Ya. That is my personal opinion. I understand his points about the government, income equality in Singapore and how he says that LKY is a dictator. I don’t necessarily think he’s a dictator but he has some traits of a dictator.
Overall, I think the way he says it, if you want people to listen to him(you), he should not have been so.., in a way offensive. If he put his points across in a more logical, less offensive manner, then people would listen to his points more instead of getting very emotionally affected about what his said – like all the vulgarities and all that.
So you felt his points were not that logical even though he showed facts?
No, I find all his points logical. The only problem is the way he put his videos and the vulgarities that he said and some of the images but at the same time, that may be his purpose. He put a very loud video so that more people will hear him. But he should not get arrested for that.
Everyone that I interviewed kind of focuses on the LKY comment but everyone seemed to forget about the racial aspects and religious aspects. Is this because you all feel that the sentence was politically motivated? * (she misinterpreted “sentence” (punishment) as “sentence” (a set of words with a full stop.)*
I think that his sentence was politically motivated. In my opinion, Amos Yee is an attention seeker. Even though he has political motives, he uses very personal issues like Christianity to make his videos more attention-seeking. Because he wants more people to see the videos and hear his political motives.
I would say people don’t focus on the Christianity part because of how much is focused at the political part of Singapore, that’s why they put that part aside. The people you interview here are more talk about political than religious (would prefer to converse more on political than religious aspects of an issue.
If he expressed the same ideas but this time towards Islam, would you feel offended as well?
Of course as a Muslim, if all of these like that e.g. ISIS and all there, of course you would feel affected. I mean as a person, but I do not go out and make police reports about this kind of thing. People have their own opinions.
If Amos Yee videos called upon all Singaporeans, all non-Christians to rally up against and protest against Christianity, I think that is something I would disagree but, he is just stating what he thinks about Christianity. So if he says the same thing about Islam which is a religion, I would be affected but I wouldn’t do anything about it.
For religious groups with more conservative mindsets, do you feel that they should be more opened, and not feel offended by his actions?
Ya, I don’t think that anybody should feel offe.. ok you can feel offended but you do not need to make a police report and then arrest him for all that and what he said.
But then if it continues to become a normal trend and everyone starts to talk bad about different races and religion, how do you think the government should deal with the whole situation?
I think the government should deal with the situation by simply e.g. stop them from putting up these posts by imposing fines or creating laws. Charge them for posting all these things but not to the extent of arresting them and such.
Maybe Singapore (can have) these kinds of censorship where they don’t allow certain content, but not to the extent of arresting him. Again in the video, he never ask for anybody to do anything against Christianity. So it’s not something that the government can say “ Oh you know, you caused people to like.. social unrest and all that”.
To read more, please go to:
Share