I FOUND THIS POOR DOG SEVERELY NEGLECTED & ABUSED BY ITS OWNERS

I was in the bus otw back home going by upper changi road east, and i saw two ladies with this dog from the window and i got off bcos thr was obviously smth wrong. They were two very kind japanese stewardesses who also happened to see this poor thing when they were walking across the street.

He was lying infront of this private estate with their house gates wide open right by the main road where cars were speeding by.

He was shivering, lying in red ants and one of his eyes was so clogged with dirt and blood and he is blind, he had no reaction to any arm movements we made.
I let him smell my hand and touched his head and he immediately jolted out of fear.

Slowly i pat him and hugged him and carried him up. There’s a blue string on his neck (the f-ing plastic type of string), so i assumed he belonged to someone. The ladies and i asked the people in the house with their gates open (which i deeply regret now bcos of what happened) if the dog belonged to them.

Their helper came out and said yes it’s their dog and she called this old lady out.

The lady told me specifically in chinese ‘No la he’s just old he’s very healthy theres nothing wrong with him la’ with smiles and laughter.

‘he’s just old already he’s my son’s dog, don’t worry ok give him back to me’.

Which i then refused and i just held him closer to me.

I tried looking for sosd’s (save our street dogs singapore) number but i couldn’t find it and i was rushing cuz my phone was dying so i just called spca (but im so scared they’ll put him down.)

I explained everything and the guy on the phone told me he’ll contact the inspector and they’ll have someone go over to the address (I’m not going to expose it) tomorrow.
i told the old lady to let me bring it to a vet because he is obviously very very neglected and frightened. When i carried him all i felt was bones, his ribs, his spine, he was full of fleas and red ants crawling all over him yet he just sat there.

I asked the owner to call her son but she just nodded and said she’ll call him later in the night and asked for her dog back again, telling me it does not need a vet and that it is fine.

She insisted that i return it to her. There was nothing i could do i had no rights to just take the dog by force.

I’m really so fucking heartbroken and i can’t fucking stop crying to know that someone could just lie about this type of thing where an innocent life is at stake. It’s so fucking clear this dog has not been taken care of and SEVERELY neglected and abused. When i passed the dog to her, she held it far away from her body like it was some piece of trash and walked back into her house asking the maid to close the gate.

The gates had very small spaces between them so i couldn’t look inside but i peeked in and there the dog was, outside, the house doors closed lying beside their car.

I called the spca again and talked to the same guy and coaxed him to tell the inspector right now, which he did, i also emailed the pictures to them.
I really hope they’ll be able to help this dog tonight and take him away from that fucking cruel household.

He was so scared, but when i pet him, he licked my hand and was so gentle. He’s a sweetheart and fucking does not deserve this type of shit.

If they even gave a fuck about him wouldn’t someone have realized that he’s outside by the road and not in the house?

Especially when the gates were left open and their helper was walking up and down in and out of the house, where there was a CLEAR VIEW of the dog lying by the road. No one cared.

THIS IS BULLSHIT I AM SO ANGRY AND SO FUCKING UPSET.

I offered to take the dog to a vet, she could follow me her son can follow me whatever ill pay for everything but she just insisted no and shut the fucking gates.

DOG OWNER: OH PLEASE, I PUNCHED MY DOG IN THE FACE 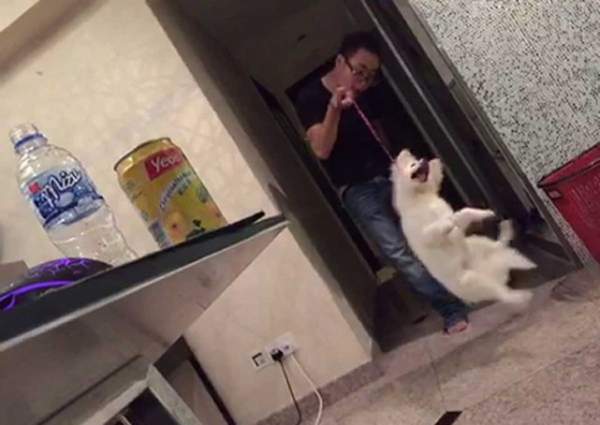 SPCA & AVA WILL BE TAKING LEGAL ACTION AGAINST DOG ABUSER