In response to a petition from a group of angry residents residing at Centrale 8, a Design, Build and Sell Scheme housing project in Tampines, Tampines Town Council chairman Baey Yam Keng has informed residents via email that a "special taskforce" headed by Education Minister Heng Swee Keat will look into their concerns.
"It will be led by a small group of experienced grasssroots leaders, supervised by Minister Heng himself personally," said Mr Baey, PAP MP for Tampines GRC. He added that Heng has taken a "personal interest" in this matter and was confident the matter could be resolved amicably.
In their petition, residents from 400 of the 708 units at Centrale 8 called for compensation and an extension of the one-year-warranty period for the developer to rectify the defects. They also complained that inferior quality materials were used to construct their units.
This latest fiasco comes in the wake of similar complaints from residents of other DBSS projects such as The Peak @ Toa Payoh, Trivelis and more recently, Pasir Ris One.
In response to the news about the "special taskforce", Sim Lian Group Limited CEO Kuik Sin Pin issued a statement of their own, informing residents that Centrale 8 was constructed "in accordance with building plans approved by… the Building and Construction Authority (BCA) and Urban Redevelopment Authority (URA)."
Kuik wrote that Sim Lian and its main contractor remain "committed to carry out all defect rectification requests within each unit owner's defects liability period".
Sim Lian Group's full statement: 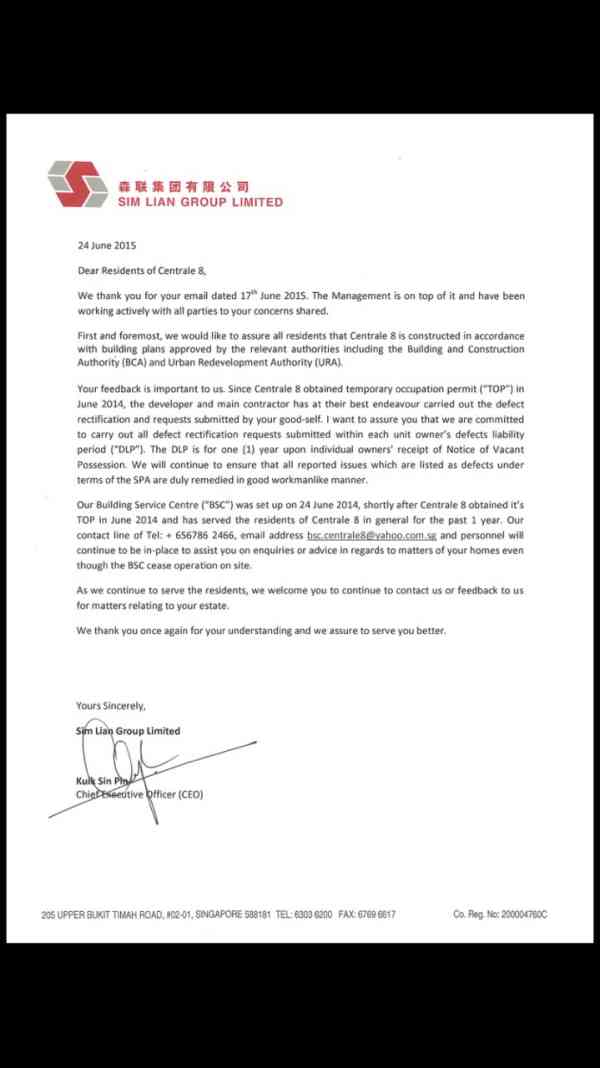