PAP MINISTER FASTS FOR ONE DAY, GETS FLAMED BY NETIZENS

PAP minister Khaw Boon Wan and 50 non-Muslim MPs and grassroots activists joined Muslims yesterday in fasting for one full day.
"I was told to get up at 4.30 to prepare breakfast. So last night, I didn't sleep well,” said National Development Minister Khaw Boon Wan, who is also MP for Sembawang GRC. “So I got up at 3.30. So I said 3.30, okay lah. So I go down at 3.30. I ate my breakfast and I have not eaten since 3.30."
But instead of garnering praise for their efforts, some netizens have accused Khaw of being insincere.
On the Facebook post by Channel News Asia, netizens questioned whether Khaw was sincere in his fasting, or whether he was just trying to win votes. One netizen pointed out that fasting is a sacred duty to Muslims, but it becomes meaningless if a person fasts and does not know the meaning behind it.
Some netizens also asked whether PAP ministers would participate in kavada-carrying or firewalking rituals during Thaipusam. 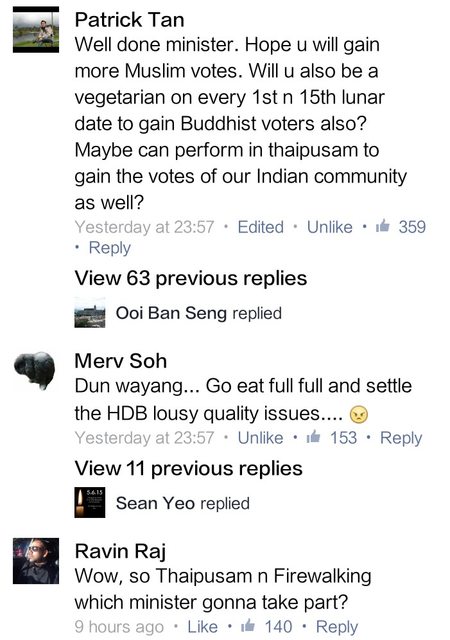