In a shocking turn of events, Malaysia's Land Public Transport Commission (SPAD) rushed to issue a media statement to clarify that The Edge Malaysia and Singapore's media had misquoted their CEO Mohd Nur Ismal Mohd Kamal on the issue of the High Speed Rail (HSR) terminus linking the 2 countries.
In an interview with The Edge, Mr Nur Ismail was asked whether ending the HSR in Singapore. He had replied that the Malaysians had actually preferred to end the HSR terminus in Singapore's Central Business District, but had chosen to compromise with Singapore and end the HSR at Jurong East instead.
Mr Nur Ismail had cited the example of Malaysia wanting to end the terminus at Johor Bahru's Checkpoints, Immigration and Quarantine (CIQ) complex as an illustration of how both sides had to compromise. According to him, it would have benefited Malaysia to have the HSR end at Johor as they would have complete control over the project, but "this would not have been optimal and neither country would have benefited as much".
The sudden U-turn comes amidst an embarrassing media frenzy over Malaysia's misquoted statement, which seemed to suggest that HSR deal was on the rocks. The false media information circulated unchecked by mainstream media even prompted Singapore's Ministry of Transport to issue a long, wordy statement expressing surprise that the Malaysians seemed to be backing out of the HSR deal.
This is not the first time that the mainstream media has been caught propagating information without first verifying its accuracy. Just this month, daily paper TODAY was slammed by Yale-NUS for misreporting on the drop out rates at the liberal arts college.
The full statement by Malaysia's SPAD: 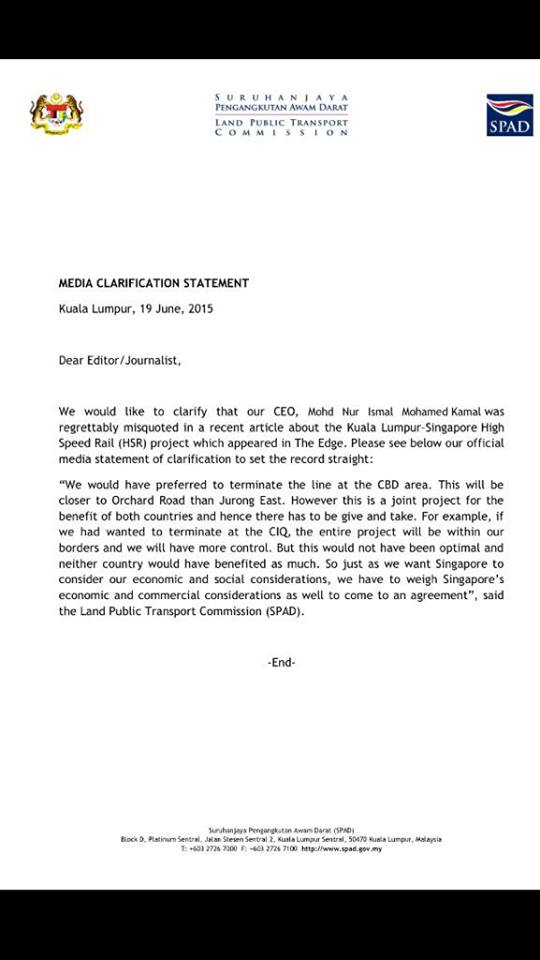