This is a follow-up to my original post which can be found here. I will basically outline what happened after my previous post. Sadly, this probably won't go as viral as the previous one as it's not so 'juicy', but I do hope it gets shared so people know the full story.

Timeline of Events
1) Anytimefitness Malaysia contacted me
9th June: On the day of the post, just about 5-6 hours after the post at around midnight, I got a private message on Facebook from an Anytime Fitness staff from Malaysia. 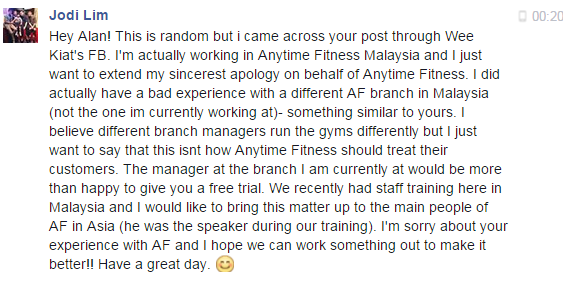 I thought it was rather nice of her, so I thanked her for her message and told her that I hope that 'something is done to improve the service quality of such errant staff'.
From the Facebook comments, it seemed that there were mixed responses – some came out to defend the franchise, saying their experiences were nothing but pleasant. There were also others who claimed to have been mistreated by the nex branch too. A recurring theme was this – Anytime Fitness isn't that bad as a franchise, but the nex branch may have some systemic issues.
2) My post on Anytimefitness Nex was deleted and I was blocked
10th June: Some people told me to complain on the nex branch's Facebook page, so I did, including the link of my post for details. However, it was merely deleted later in the day, and I was blocked from posting any further on their page.
3) I wrote in to Anytimefitness Asia
11th June, 10 AM: Not knowing whether AF would care about my blog (I didn't know it would be going viral), I wrote in to their Asia HQ. I was seeking some sort of official response from the brand, as they had remained silent and also tried to silence me (on their Facebook page).
4) All Singapore Stuff picked up my blog and republished it
11th June: Shortly after the email, a friend texted me telling me that All Singapore Stuff (ASS) had posted my blog in full on its page. Wow. Shit just got real. I felt mildly comforted that my story was travelling and would be heard.
5) The story began going viral
11th June: I'm not sure what it was – maybe it was the injustice of the situation; maybe the story struck a chord with people who wanted to band together to protect consumers' rights; maybe people had similar experiences; maybe it was my quirky writing (haha :p ) – whatever it is, people were sharing it. And sharing it fast.

Within a few hours, there were already several thousand views on the ASS website, and their FB post had 100+ shares.

6) Anytimefitness HQ begins to contact me
11th June, 3.17PM. I think they began to realise the gravity of the situation and how outraged people were, and they began to reach out to me. A friend's friend who happened to be a US spokesman for AF called me but I missed his call. Their Master Franchisee for Asia, Maurice, left a comment on my blog post and sent me an email.
The email is a little long so I won't republish it here, but it's identical to the comment from 'Yours in Health' on the original post here. Basically, they tried to apologise in a very long-winded way. Here's some snippets (the bolding of words was done by me):

"I am the Master Franchise for Anytime Fitness Asia and our team and all of our stakeholders go to great lengths and invest heavily in time, effort, training and tools to foster enjoyable environments and to create uplifting shared experiences at our gyms in the hope of nurturing our sacred mission – to remove the barriers to a healthier lifestyle and to change lives….sometimes we get it wrong and in this instance, we clearly let you down and I sincerely apologize."

He did address the main issue on the free trial, stating:

"it certainly is not industry practice to promote a free trial and then to attach conditions or deny the access."

The email ended with:

I seek your understanding and consideration – we have over 3,000,000 members peppered throughout the world and countless numbers of tremendous success stories to share and I ask you to please persevere and give us a second chance – we are making a blanket offer to all Singaporeans to use our gyms for a free one day trial by visiting any one of our Anytime Fitness gym websites and registering with us and we will welcome you with open arms.

I don't know how the 3 million members thing is relevant, and I don't see how the bolded text is new information. In fact, it is a downgrade from the previous 3-day trial (and lower than the international 7-day trial).The rest of the day, I checked out the comments on ASS / FB once in a while, just to see what was being said, and exchanged an email or two with random commenters and Maurice.7) Anytimefitness Nex posts an apology on Facebook… only to delete it?11th June 10pm : Something strange then happens. AF nex posts an apology on their Facebook… which they promptly deleted some time throughout the night (or maybe in the early morning?). Luckily, I had some screenshots:

I underlined the first line in red because that really annoyed me. Firstly, I don't know how else you can interpret a finger hooking action apart from being a rude way to beckon a customer. Maybe this is perfectly normal in Australia, I don't know.Secondly and more importantly, that was NOT the reason why I felt aggrieved! If you read the original post, you would know I actually felt he was justified for behaving that way because maybe he thought I was a trespasser. What made me write the whole blog post was what happened after that 'non-verbal gesture'. The entire interaction, how I was 'suckered' into paying a walk-in fee (as some netizens say), his odd long stares, his refusal to give me a trial even though I asked several times.Reading the whole message as a whole, I think it may have been eventually taken down because a more seasoned PR person realized that despite 'apologizing' twice,  it makes three mistakes:1) Absolves personal blame by putting the blame on me (for misconstruing the gesture)2) Sidesteps the bigger issue of the entire rude interaction3) A little too lengthyAgain, these are just my guesses, and I have no idea why it was deleted.8) Stewart personally apologizes12th June, 630am: If you missed it, Stewart is the Australian boss, AKA Mr Bull. I woke up this morning to find that he had left a comment on my blog. Here it is:

Hi Alan,On behalf of Anytime Fitness nex, I would like to offer my personal apology for your unpleasant experience. We pride ourselves on being personable and your experience and feedback shows that we must always work to improve.

Although no longer available we would like to offer you the opportunity to fulfill your No Obligation 3 day pass with us at your own convenience.Please accept my apology and take up the opportunity to see how good we really are.RegardsStewart Hine

Ah. This is how it should be done. Short and simple and direct. I like it. I appreciate that he did this, even if it was because AF HQ was putting heavy pressure on him. This was also posted on ASS's article.9) Anytimefitness nex FB has a change of heart12th June: First thing I noticed was that I was unblocked, and could post on their Facebook page again. [EDIT: Nevermind, I don't know if I am still blocked or they are moderating posts, but I can't see my post appear on their page when I tried to share this. Oh well.] Next thing was that whoever managed their Facebook page became disarmingly humble. For example, this interaction:

Chinno: -links my blog- I don't know this author but I pity him. Is this true?

AnytimeFitness nex: It's true. We failed.

And a few more along the same lines where they addressed the service failure head on, owned it, and apologized for it. I respect that. That should be how good PR/service recovery is done! Just acknowledge the mistake, don't make excuses and don't be defensive (unless clearly wronged), and promise to try to improve.They also mentioned publicly that they had reached out to me, and hope that I would give them a second chance. They also mentioned that Stewart was 'not doing sales anymore', not sure what that means.10) Outstanding QuestionsI had some outstanding questions that were not answered.
a) "Free passes are still available and in fact we have increased the number available due to popular demand"
This was what was posted on their FB page in response to someone asking whether the trial was available. This means the number is still limited? Does this mean it's possible someone may get rejected for a trial when he goes down? Or will the staff manage it properly and not let something like this occur?UPDATE: I got an answer from Maurice, the Master Franchisee."Nex and all of our Anytime Fitness gyms will honor the one day pass. They will definitely not get rejected for a one day pass"If any of you actually get rejected for your trial from now on, do share it in the comments below!
b) After the trial, does the individual 'lapse' into automatic membership and gets charged for it if he does not return the transponder? Some of the comments I've seen complained about how they were double charged, etc, so I'm concerned about this.This was what I asked Maurice. It felt like a strange process to have, from a customer perspective.
UPDATE: From Maurice:
"They pay a $68 DEPOSIT which is fully refundable if they do not proceed to membership. They are not double charged"
So basically what Stewart said previously is in complete violation of the franchise's processes(he said that you would lapse into membership and be charged if you didn't return the transponder). If any of you get told this from now on, do share it in the comments below!—11) ConclusionSome of you may be wondering – so will I return to AF nex? Or AF at all?Well, despite the sour experience with the nex branch, AF has shown that they have decent service recovery standards, which is commendable. I may end up going to Fitness First though, simply because it is right next to my office at one north, while nex requires a slight detour and by the time I reach after work it is rather late for a workout on an empty stomach, though AF is dangling some offers at me. I haven't decided, will need to start work first and see how the workload is.Anyway, thanks for reading, and for sharing the previous post if you did. I hope you don't walk away from this thinking that Anytime Fitness is a shitty franchise, because I really don't think they are, they may just have a few black sheep.Some people have also asked whether AF is truly and sincerely sorry, or just sorry that they got caught and this blew up on the internet. I've a feeling it's a bit of both. Regardless, from some of the comments, there were people with exceedingly positive experiences as well. With a large franchise like this, there are bound to be a few blips.Take care everyone, and train hard (wherever it is)!

Have you been denied a free trial at anytimefitness before? Let me know in the comments below or drop me an email, with as much detail as you can, and I'll try to seek some sort of redress for you with the Master Franchisee.