After the Singapore Lions were beaten by the Myanmar team yesterday 2-1, Myanmar fans showed their true colors by going to the Football Association of Singapore Facebook page to boast about their team's victory. Shockingly, many fans also posted racist and insulting comments about Singaporeans and Singapore players, which angered many Singaporeans netizens.
In heated exchanges between Singapore and Myanmar fans, netizens from Myanmar were seen insulting the skin color, religion and playing style of the Singapore Lions. They insulted the Singapore Muslim players by calling them "ISIS" players or making fun of their dark skin tone. These netizens from Myanmar also accused the Singapore side of playing dirty by roughing up their players, an accusation which Singaporean fans countered by pointing out that Myanmar's players had resorted to diving and gaining sympathy points from the referee.
Some of the comments made by Myanmar's rowdy netizens were submitted by users, who were disgusted by what they saw. 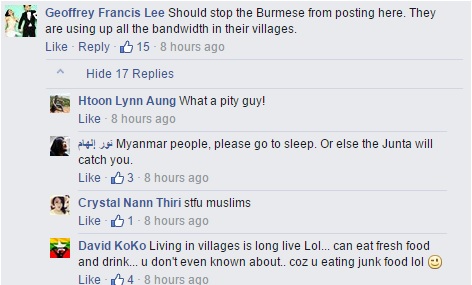 "The next time you talk to your Myanmar colleague, you know what dark thoughts are behind their smile." says a netizen, who says he works in an employment agency for job seekers from Myanmar.
"All these negative comments are really in poor taste. It's just a group stage football match not the SEA games football finals. The better footballing team won on the night. Period. As for my Singapore and fans I am sure our boys will do better remaining games still make it for the semis. Have to believe!" wrote one Singaporean netizen.
Share