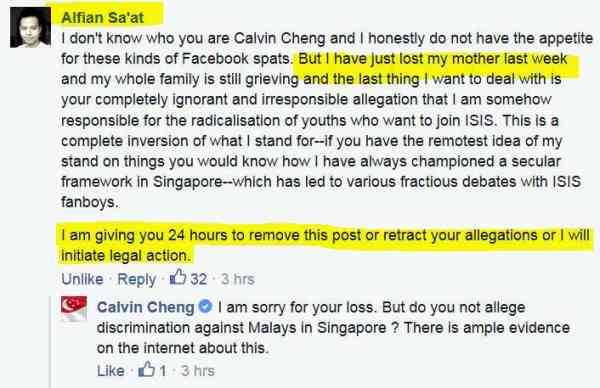 On his Facebook, Cheng wrote that Singapore has to be careful of the threat of ISIS propaganda as ISIS targets regions where Muslims are minorities, using their insecurities and fears of being oppressed to incite these communities to violence.

But in a sudden leap of logic, Cheng then suddenly accuses “people like Alfian Sa’at” of using “irresponsible rhetoric” to “allege racial discrimination” against the Malay-Muslims in Singapore, and argues that the government should watch Alfian Sa’at and others like him closely, or even use the ISA against them if they cross any “red lines”.

Upon reading this unfair accusation, Alfian Sa’at posted his response to Calvin Cheng, asking him to remove his defamatory posting within 24 hours and offer an apology, or he would lodge a defamation suit against Cheng.

Seemingly unrepentant, Cheng challenged Alfian Sa’at, alleging that there is “ample evidence” about his accusations on the internet. 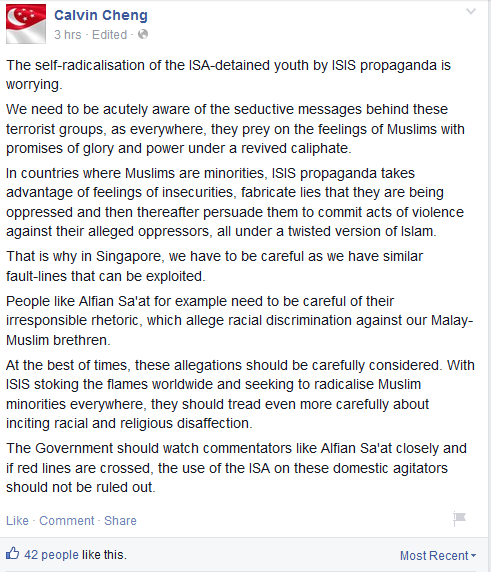 Supporters of Alfian Sa’at have turned up on his Facebook and posted angry comments on Cheng’s Facebook to show their support for the playwright. But calls for Cheng to offer an apology to Sa’at have gone unheeded.