Editor's Note: This Facebook post was shared by a reader. The views in this post are his own.
Okay, time to unleash and spread the word to prevent this guy from swindling other people in SG. Everyone please help to share and spread.
We don't want this f**ker to go around cheating more people.
THIS F**KER OWES ME SGD$24,380!!!
Lim Kun Yun, age 22.
a.k.a Edison David Lim
(He just changed a new name again to Christopher Edison Lim.)
Facebook Profile: https://www.facebook.com/LimKunYun
This 22 year old fat kid goes around getting people to invest in his company, collecting investments and instead of accounting for the money, he embezzled the company funds to pay off his personal debts of more than $75,000. Not only this, while he was still saddled with all these debts, he was still splurging on his extravagant lifestyle, rented offices that he could not pay, rented a condo for himself and his staffs to stay in (teenage girls, god knows what plans he might be thinking when he is co-habiting with them), splurge on expensive meals and taxi rides to wherever he goes.
ALL THESE WHILE IN HEAVY DEBT.
He goes around swindling people's money to sustain his lifestyle.
Told his parents and everyone else that he is a 2LT in his camp, even though he is just a lowly admin NSF. He would also go around asking people to google him for all his achievements in NYP (claims he is a speaker and head of Entreprenuer Club), his links and connections to the PAP (See his FB photos) etc. Says he owns a condo, fully paid up (he rented it).
Till date, the amount he owes myself, a few other partners and some others who loaned him money, amounts to at least a whopping $120,000.
And this fat f**k is still going around trying to swindle money to cover his shit. This is not withstanding the amount of salaries that he owes his staff, mostly teenage girls. Apparently, this fat f**k pays them a salary of $3K to $5K, and mind you, no real work is being done by the staff, because his projects to most of his clients are not even being done. In our words, this lonely and desperate f**ker is using our money to pay for these girls company and attention, to keep them by his side at all times.
In just a short span of a month, he has squandered about $30,000 on the rental of his condo to house the girls, to cloth them and feed them, sustain their lifestyle habits of manicures and more, just so that he would't be alone. This f**king loser.
And he actually confessed in front of a few of us, that he was seeking us for investments for the sole purpose of raising funds to repay off his pressing debts. The best thing is, we got this confession down fully recorded, and
When we uncovered his deeds, he pleaded with us to give him time to raise funds to return us. He went to all the banks to get a loan, and this is when he confessed to us that he faked and doctored his Notice of Assessment to try and cheat the bank's for a loan. THIS F**KING FAT ASS HAD THE AUDACITY TO DOCTOR HIS N.O.A STATEMENT!!!
CHEATING THE BANKS. SUBMIT DOCTORED DOCUMENTS.
He gave countless bounced cheques to clients and creditors. Those who kena before, pls feel free to send me screenshots of your conversations with him.
I am not going to give this fat f**k any more time or chances. I will be making a police report on all the criminal offences he has done, namely, Criminal Breach of Trust, embezzlement of company funds, doctoring of Legal Documents, cheating the banks, owe staff salaries and refuse to pay and the list goes on.
The purpose of this post is to spread awareness to everyone else, so that everyone can be alerted to this fat, obnoxious, lying cunt (who has terrible BO by the way), and will not be tricked by him into any loans, or entering into any other business agreements with him. He is still desperately trying to find people to cheat or borrow money from.
‪#‎limkunyun‬ ‪#‎edisonlimkunyun‬ ‪#‎conman‬ ‪#‎OWEMONEYPAYMONEY‬ ‪#‎FATF**K‬ ‪#‎nyp‬ ‪#‎youngpap‬ ‪#‎pap‬
EVERYONE PLS SPREAD THIS POST AND MAKE SURE OTHERS DON'T GET CONNED BY THIS F**KER. 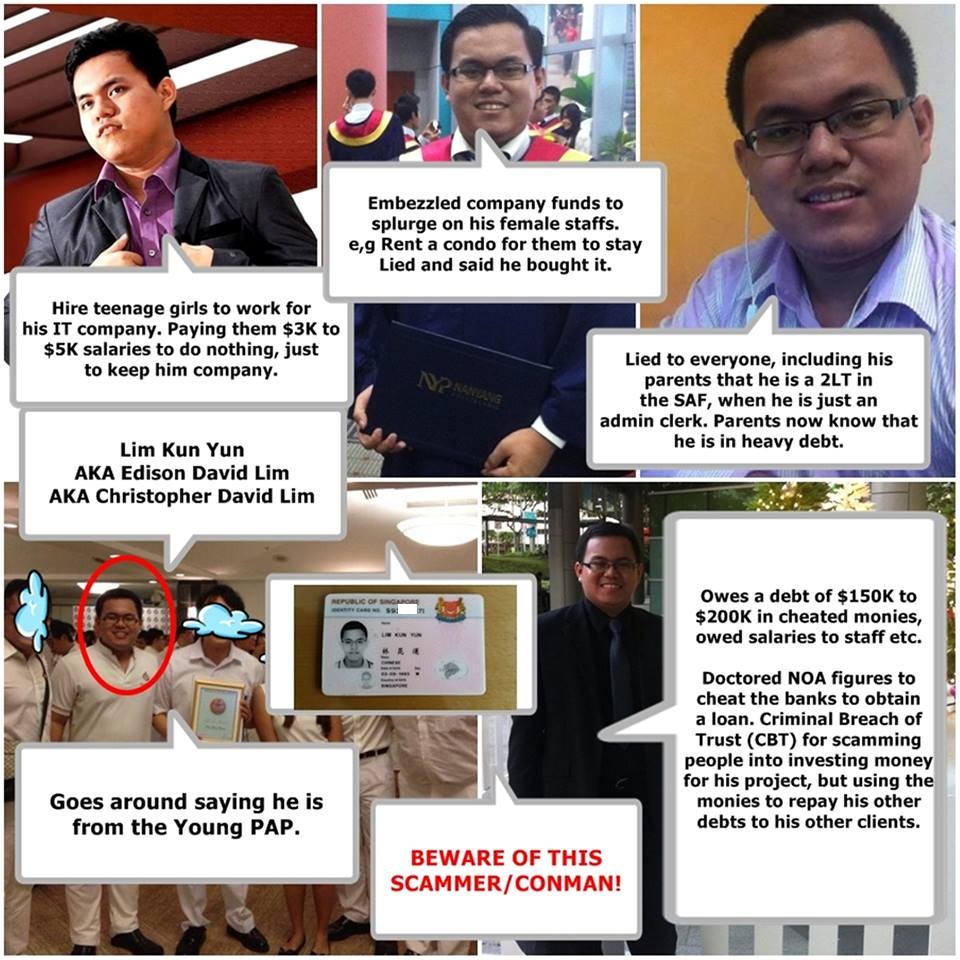 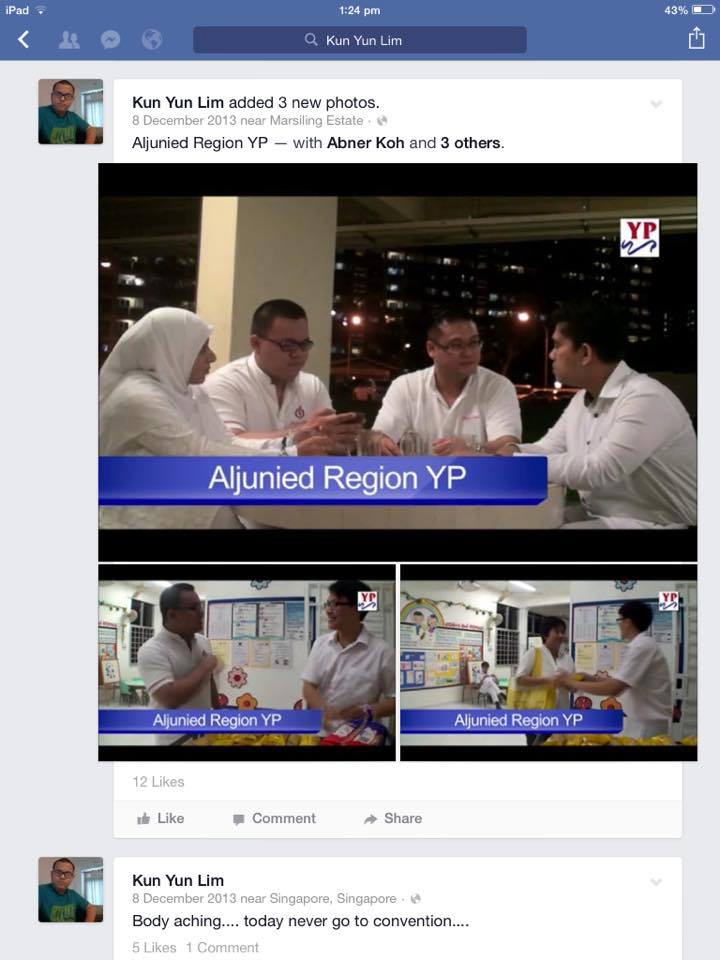 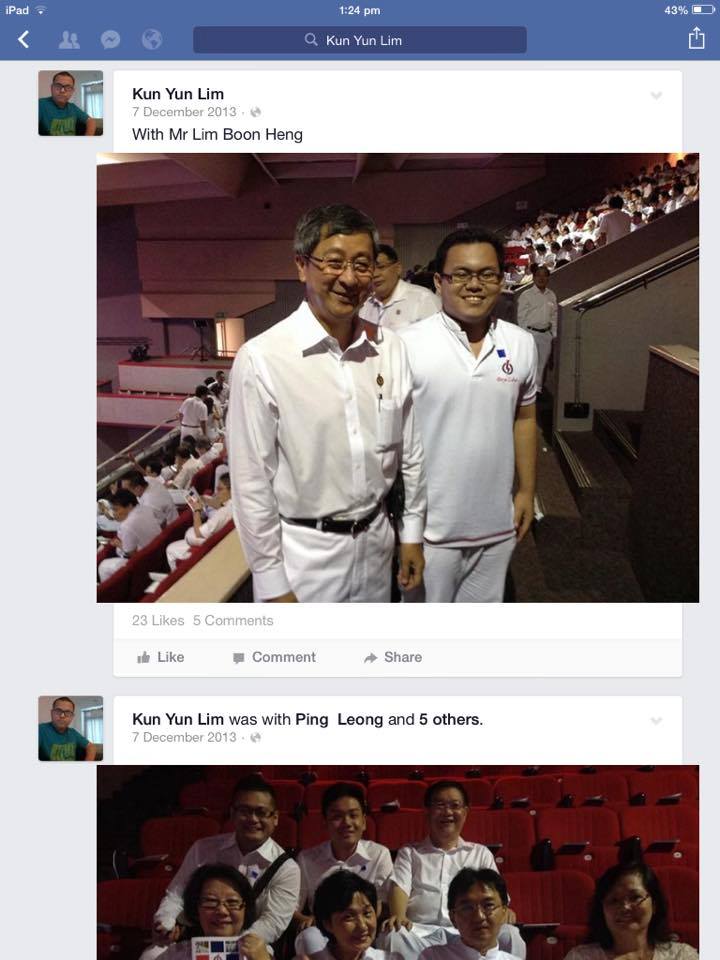 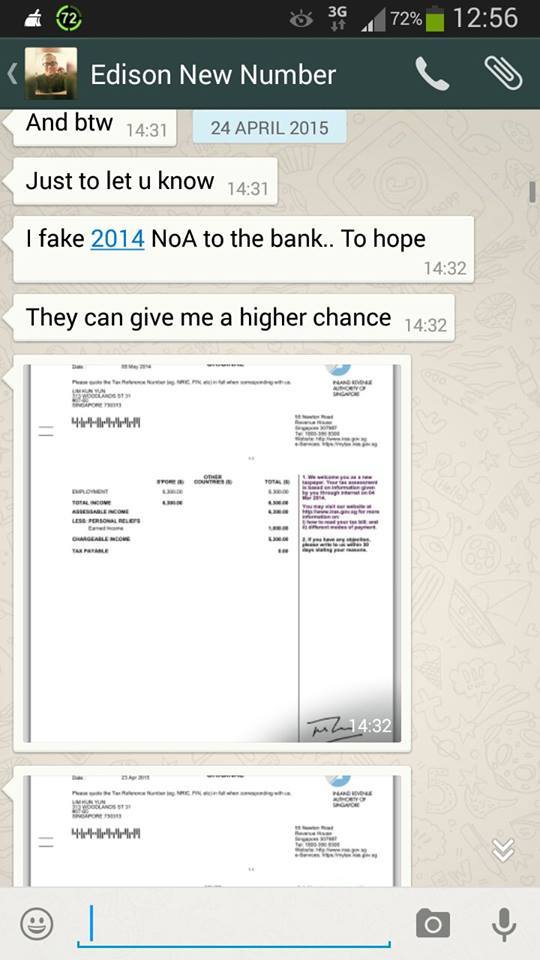