I have to say I have an affinity with Christianity. You see, my maternal grandmother is a staunch Christian. As a devotee, her faith of the religion reached a level where she would play Santa Claus at every family gathering. Whoever among who attended church was nice and whoever who didn't, was naughty. She dictated her choice of religion towards her five sons, including my father. All of them conformed without questioning, as a demonstration of filial piety. Oddly enough, none of her sons ended up marrying a Christian woman, much to her annoyance.
As such, Grandma demonstrated her iron fist by making such a racket about the prospective marriage of 4th uncle, her remaining unmarried son, to a Thai Buddhist lady till 4th uncle gave up on the relationship. He remained single since. Throughout the years, growing up as a young boy, I witnessed how Grandma condemned the religions of her daughters in law. She left my mother alone, as she was wise enough to declare she was a free-thinker. The rest, particularly my 5th uncle's wife who was a devoted Buddhist, was accused of worshiping "devils" or "idols" by my Grandmother regularly. These were nothing but the truth. As Grandmother did not make videos or blog about her beliefs in Christianity and what she, as well as other worshipers in her church, were taught to damn other religions, and therefore hurt no innocent member of the public, nobody made police reports demanding her to be charged under the Sedition Act. However, she did cause fractures within our family through the years.Despite that, I love my Grandmother. To me, Grandma's actions were involuntary. She was merely carrying out actions that depict what she was taught about love. To convert a non-believer is saving. My Grandmother merely wanted to save the ones she loved.
Those were the kind of information taught by her Church. It aligned with the style of gospel that once got Senior Pastor Rony Tan, founder of the Lighthouse Evangelism, into trouble with the ISD in 2010. Like Grandma's church, Rony Tan's church mocked the precepts of other religions during services on regular basis. What Rony Tan received was a visit from the ISD, who informed him that what he did was wrong and he was given a chance to apologise for it. That chapter was quickly closed but behind the scenes, many Christianity organisations continue to propagate their ways. In 2012, the NUS Campus Crusade of Christ was made to apologize for their allegation that Thailand was a place of little joy because of their core religion (Buddhism) in one of their activity posters. Both incidents were brought to public attention, and had undoubtedly annoyed many, but no one was charged under the Sedition Act.
When I was 9 years old, I was one of the termed "key holding" child, an emerging trend of young children given the keys to home because both parents are at work. One day, I was stopped by a slim lady in her 20s just a minute away from my HDB flat. She told me to give her 5 minutes, just 5 minutes, for her to share with me about God. As a kid who wasn't accustomed to saying no, I meekly agreed and sat down on the stone bench nearby. She flipped open a tiny booklet and pointed her to the gigantic cross that connected the earth to the heaven, told me Jesus Christ was the bridge and I would be saved only if I believe. She lied. I had to sit there for more than 30 minutes and was constantly urged to give out my contact number and address. My puny mind was focused on her dishonour than my salvation. In the end, I lost my patience and darted off. That one mere one example of harassment out the many I have faced in my life. More examples will be provided upon request. All sharing are absolutely nothing but the truth.
I'll now come to my point. 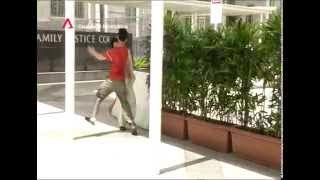 By now, the name of Amos Yee is well known in Singapore for both his offending remarks about Christianity devotees as well as his astonishing fighting-spirit of a 16 year old. Well, no prize for guessing, I agree with Amos Yee. Not his speech delivery but the message. Throughout my life, I have endured constant harassment from Christians but was taught to swallow it each time for the sake of harmony, since religion is taboo and shall not be discussed or debated publicly. From my perspective at least, if believers were taught in such a way that their thinking processes are no longer capable of filtering their actions to turn against family members, or harass random members of the public, is it so offending to call them mindless drones? If it is, would that be more offensive then being labelled as an idol worshiper? In my opinion, if the religious can take offence easily over minor banter, then Singapore should go religion-less to live in harmony. After all, we were already indoctrinated to worship money, and Gods or Goddesses that somehow require a lot of money from us. A convenient common factor.Instead of taking a step to reflect upon themselves, religious fanatics (Christians or LKYians) took the opportunity to lynch a boy into oblivion. Even my simple minded Ah Beng friend can tell you his principle of harmony, "Ai bai mai dulan, ai dulan mai bai" Go figure.
This 16 year old known as Amos Yee was punched on the way to the Shrine of Justice. Sadly, not a single among the hoard of reporters were willing to take on the moral duty of care or show a tinge of civic professionalism to zoom their lenses on his assailant. Instead, everybody continued doing exactly the same thing like programmed automatons to focus on the Amos Yee wincing in pain. After being put into days of remand for refusing unreasonable terms for bail, Amos Yee reappeared in court shackled in both hands and legs, donned in prison attire as if his offence was serial killing, terrorism or drug trafficking. What Amos Yee did was speaking words that displeased people. What kind of first world society chains up a youth for speaking, be it rightly or wrongly? Yet, Singaporeans cheered and said he deserved it. I couldn't help but wonder what our religious bodies have been teaching us. To be kind, to be merciful, to be forgiving. Singaporeans have shown none. Shame of us.
We may be the richest country and have built the best airport in the world. We will boast about our multiple achievements for the entire SG50 and go into an overdrive during the NDP week. However, we are just a hollow society, with a population without basic human decency, the ability to think right or the honor to protect the weak.
Share