I AM VERY DISAPPOINTED WITH TAN CHUAN JIN AND CNA

Editor's note: This letter was contributed to us by a reader. The views in this letter are her own.

I am very disappointed in you, Mr Tan Chuan Jin.

In your last day as Minister of manpower, you failed to reassure Singaporeans that we can live in Singapore without fear of being pushed out by foreigners holding fake degrees.

Actually, under your watch, Singapore has become a place where foreigners with fake degrees are replacing local Singaporeans with genuine degrees. This has caused many Singaporeans to lose their livelihoods, while million dollar ministers like you can jump from one place to another and live expensively using tax payers' monies.

I am also disgusted with the admin of Channel News Asia Facebook, who always deleted popular comments made by true local Singaporeans reflecting the true voice of the people. One of the comments which became very popular was by this Rock Singh. After it became popular, CNA admin decided to delete it to hide the truth. 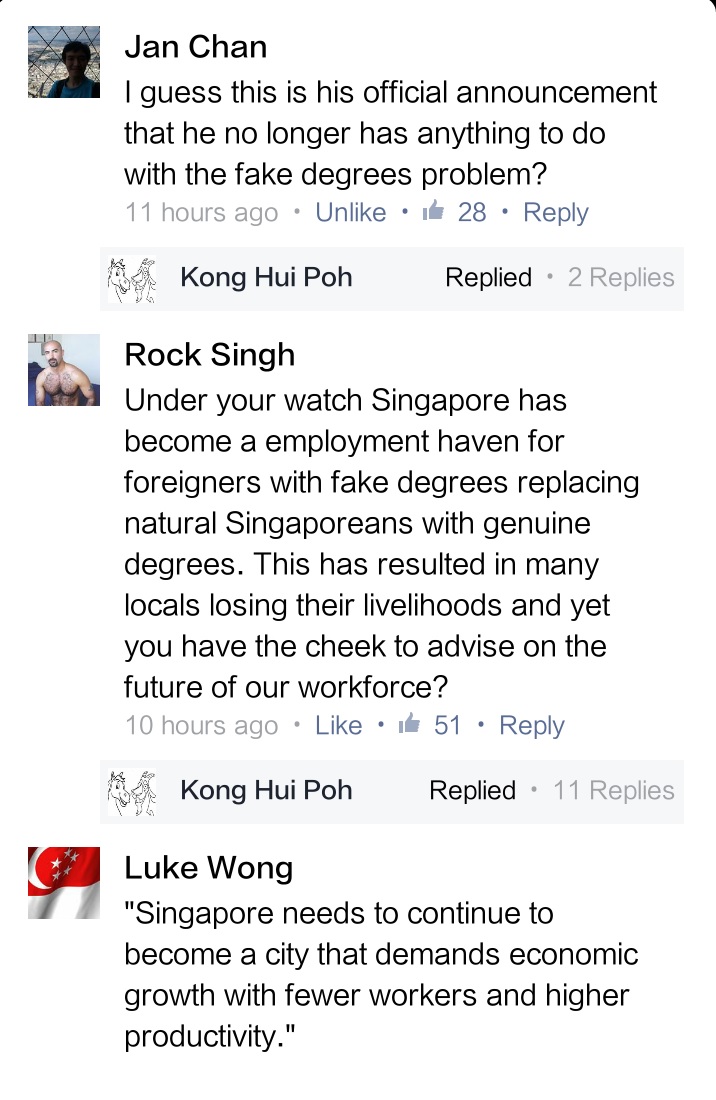 Is this how you want to silence Singaporeans? By denying us our rights to point out the real truth, you are only pushing us further and further away from you money minded PAP and the mainstream loyalist media.

Why don't you solve the problems of fake degrees in the government and private companies, starting by investigating all foreigners holding suspicious degrees from degree mill universities. When the government shows that it can protect its citizens from dishonest foreigners and clean out corruption like LKY in the past, only then will the people's trust return to you.

Foreigner: Not Fair For Companies To Hire Singaporeans Over Me

Singaporeans Baffled at Benjamin Glynn’s Sentence. Why Do We Welcome FTs Like Him?

Allowing foreign delegates to dine in will boost our economy but letting us dine in with our families will not support the economy? What logic is this?