WHY FOREIGN JOB CHEATS CHOOSE TO CHEAT IN SINGAPORE

When it was pointed out to the Infocomm Development Authority of Singapore that one of its employees, Nisha Padmanabhan, had a Masters degree from a degree mill that has since shut down, the IDA’s response could scarcely have been predicted. It replied that the MBA qualification had little bearing on her hiring. Her salary and job scope were based on her Bachelor’s degree and prior work experience.
Surely, the MBA must have made Padmanabhan stand out from other applicants who only had a Bachelor’s degree. Perhaps the IDA did not want to look a gift horse in the mouth when it hired Padmanabhan in 2014 as it was getting an over-qualified employee without having to pay market value.
In its statement, IDA prides itself in using holistic criteria in employing its staff. Integrity, however, is conspicuous in its absence from its list. Although the IDA announced that it was satisfied that Padmanabhan’s Bachelor’s degree was from a reputable university, it carefully avoided mentioning which university that was. It appears her Bachelor of Engineering degree is from University of Mumbai, which does not appear in the rankings of the top 500 universities in the world. Any local graduate would have received their degree from a more reputable university, yet she was hired.
Curiously, however, it appears important enough for IDA to state that Padmanabhan is a Singaporean. Was IDA trying to allay the accusation that they hired a cheap foreigner over a local? 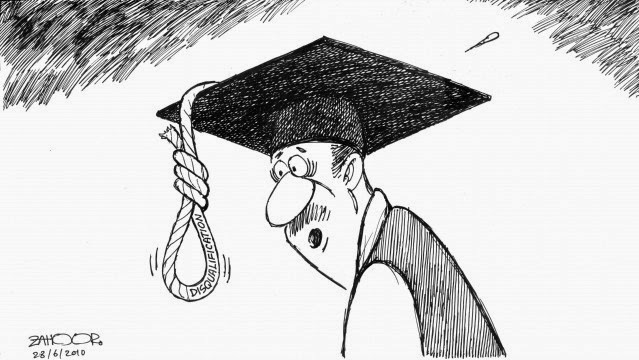 From Padmanabhan’s LinkedIn profile, it seems she may not have been a Singaporean for very long. Her primary and secondary education as well as tertiary education was in India. She seems to have started working in Singapore in 2005 around the time she bought her MBA degree from Southern Pacific University. Feeling fortunate to have secured employment in Singapore, she may have felt having an MBA would offer her security particularly if she was going to apply for permanent residency and citizenship.
The Workforce Development Agency and Immigrations & Checkpoints Authority, which would have been responsible for scrutinizing Padmanabhan’s qualifications while processing work permit, permanent residency, and citizenship applications, have remained very silent about Padmanabhan. When these agencies successfully prosecute offendors, they rarely fail to announce with some bravado the strict penalties for lying on applications. They will be well aware that Padmanabhan has committed an offence if she had declared her MBA qualifications when she made these applications.
It seems obvious to all except IDA, WDA, and ICA that they have been hoodwinked, caught with their pants down.
IDA states, in its defense:

“We would like to share that Nisha has been a committed team member and contributed in her role as an Applications Consultant for the past year.”

This is entirely believable. Padmanabhan, feeling fortunate to have secured her job, would have kept her head down, worked hard and done what is necessary to keep her position in these uncertain times. Such employees are greatly valued by managers because they are highly compliant and are unlikely to ask hard questions for fear of losing their lucrative job.
From IDA’s viewpoint, it may now seem a shame to fire a perfectly acclimatised and productive employee. What may have been an issue at the time of employment is no longer an issue now since Padmanabhan is clearly able to do the job.
And, this is the reason why many—particularly those from developing countries where well-remunerated jobs are extremely competitive—are tempted to cheat and lie to secure a job. Their primary concern at the time they are applying for their job is to get their foot in the door. They are hopeful that once on board, they will learn the skills needed on the job. With enough time, soon the lies will fade away. This is a well-proven method of laundering one’s academic and professional credentials.
This is why Padmanabhan maintains a LinkedIn profile and why she brazenly lists her MBA degree from Southern Pacific University quite prominently. If a large, high-profile employer such as IDA considers her qualifications favourably, then future employers are unlikely to scrutinize them.
Another reason why this practice is more prevalent in Singapore as opposed to Australia, which is also a highly desirable place for workers from developing countries, is the relatively low chances of getting caught here due to weak detection methods and enforcement. In Padmanabhan’s case, the risk seems to have paid off for her since IDA is taking the inexplicable step of defending her hire.
This will be an encouragement to other foreigners—do what it takes to get the job, then work hard till the degree no longer matters.
But, it will be discouraging for Singaporeans brought up believing in meritocracy.
In Singapore, the onus is placed on the applicant and the employer to be truthful. There are penalties for lying but that, obviously, is only if one is caught. Even then, one could hope for an employer like IDA.
In Australia, the onus is on the authorities to ensure work passes and resident visas are only given to legitimate applicants. The government outsources the screening and verification of qualifications and skills to agencies such as VETASSESS, which more rigorously scrutinize credentials and are also highly accountable to the public. A skills assessment application can take several months and costs around $1000, which is borne by the applicant. Despite the steep cost, it is hardly a deterrent for those wishing to work and live in Australia. The VETASSESS certificate is then provided to the government which uses it to assess work permit and visa applications.
In Australia, employers are wary of cheats from developing countries and use other methods to detect frauds. They will not accept mobile numbers or personal email addresses of referees in resumes. Office numbers are required to verify that they speaking to an actual former employer as it is not uncommon for people from these applicants’ communities to cover for them by providing false testimonies of their experience and qualifications.
It is also not uncommon for ethnic communities to collude in perpetuating such scams. This is easily evident when almost every one vouching for the applicant is of the same ethnicity despite the applicant having worked in multicultural environments. The fibs are viewed as insignificant white lies necessary in enabling people of their own kind to get ahead in what is perceived as an overwhelmingly unfair environment.
The take away from IDA’s statement for the thousands of PMETs from developing countries currently working in Singapore and the many more aspiring to work here is that cheating about your qualifications is fair game when applying for a job as long as you prove yourself afterwards. With time, the lie won’t matter.
The IDA needs to be mindful of the unintended message from its defense of itself and Padmanabhan. Its actions and words perpetuate a common fraud.
The Government too should know that Singaporeans are concerned with the alarming frequency with which foreigners are able to game the system here. Chinese national, Yang Yin is but one high-profile example. He was even able to ingratiate himself enough to get his MP, Dr Intan Azura Mokhtar, to write an appeal letter in support of his permanent residency visa. It is hard to imagine Dr Mokhtar’s letter did not make a difference to his application.
Once the foreign applicants obtain what they want, the fake credentials they provided are effectively laundered. In time, the documents will be forgotten and will no longer matter because the Singapore Government, no less, has legitimized them.
Share