COUPLE CHARGED IN COURT OVER ALLEGEDLY ‘SEDITIOUS’ ARTICLES ON TRS

A couple were charged in court today for Sedition over several articles posted on The Real Singapore.

Ai Takagi, 22, and Yang Kaiheng, 26, were each charged with 7 counts of sedition and 1 count of failing to comply with a police order.

The sedition offences are in relation to 6 different articles posted on The Real Singapore website and Facebook page between October 2013 and February 2015. While the final offence is in relation to a request for information by Police during investigations.

The couple are accused of promoting "ill will" between different classes of people in Singapore, namely Singaporeans and Foreigners.

Below is a full list of the articles and the specific statements contained within, which are allegedly seditious according to the charge sheets served formally by the police:

Specifically, the following part of the article is allegedly seditious:

– The mistaken reference to a Pinoy Family having caused this incident.

This article is a report compiled completely based on witness accounts from people who claimed that they were there.

(2nd Charge) A Post on Facebook sharing the link to the above article which also mentioned the Pinoy family. (Published 4 Feb 2015)

– A complaint that a Filipino Manager constantly gave preferential treatment to other Filipinos in the company at the expense of Singaporeans
– "[Pinoys] are without a doubt two faced. While we Singaporeans are generally concerned about each other's rice bowls, Pinoys are relentless back stabbers and pure suck ups."
– "if you are a minority in a Pinoy filled department or company, watch as how they will intimidate you by staying with their own cliques and speaking Tagalog."

This article is a TRS reader's opinion piece sent in via email on the 16th of June 2014 (we have blanked out the TRS reader's email to protect his identity): 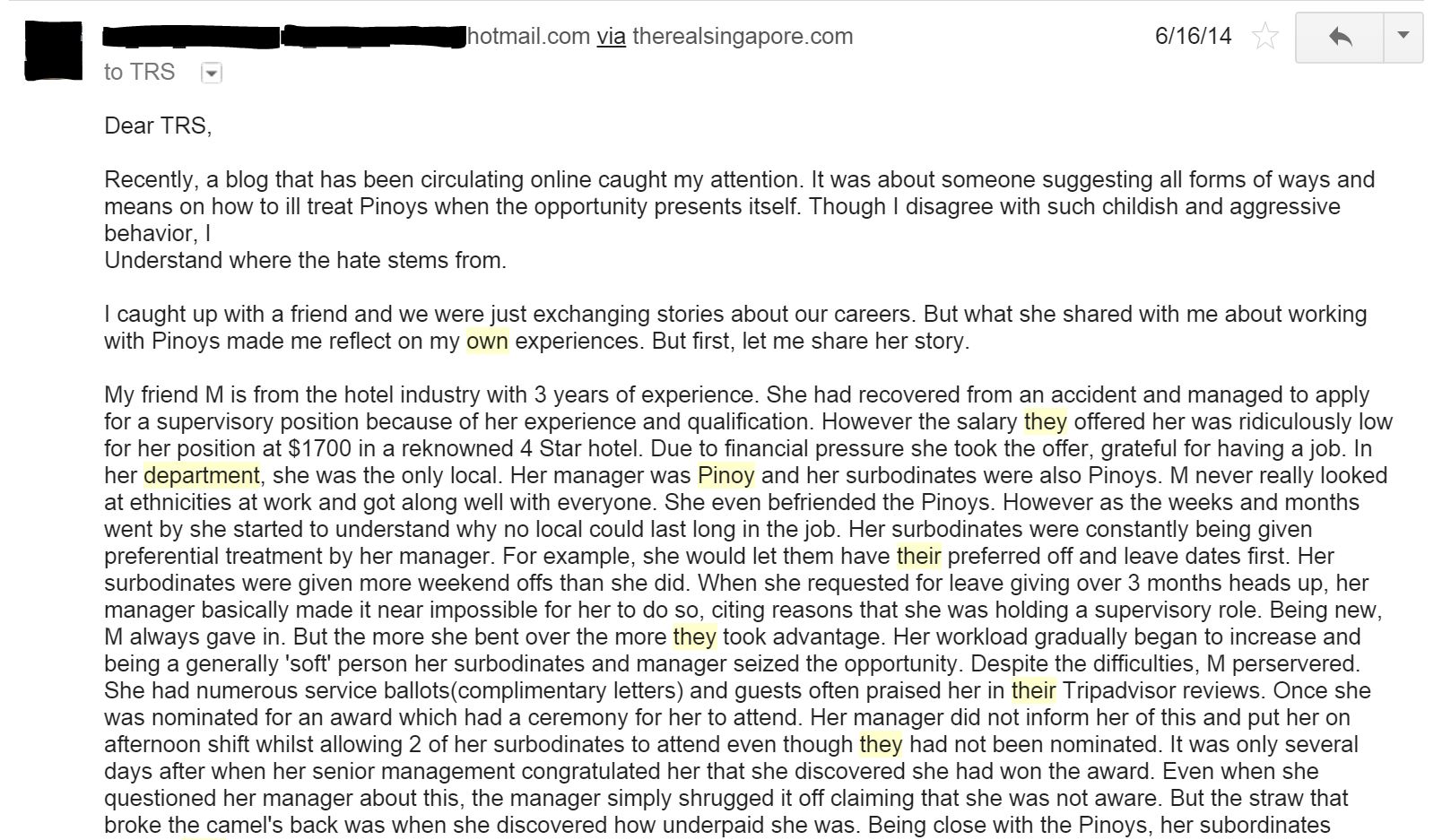 – "two clowns [An Indian and Filipino] had colluded in hiring their own nationals (mainly pinoys) in the company. "
– "now when the people sent the email [looking for jobs], anyone that was Singaporean was deleted, they kept only the foreigners (pinoys.)"
– "Basically the Pinoy hr had people from the Philippines apply for any openings in the MNC i work and deleted any resumes that were Singaporeans"
–  "i am making this post is so that you guys can be aware of the fraud going on in certain companies and games that foreigners are playing on singaporeans."

This article is a complaint shared with TRS in an email which was also published on Facebook by the original writer: 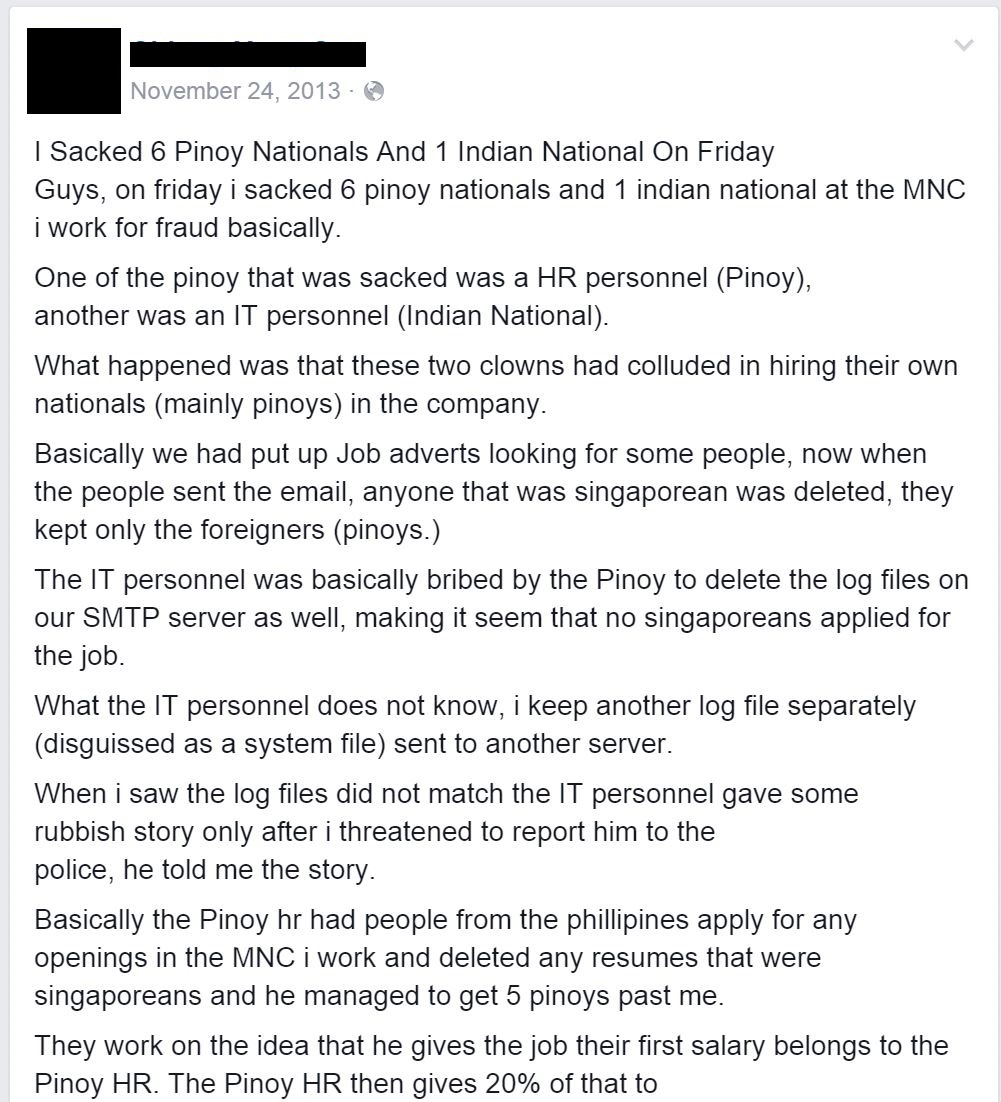 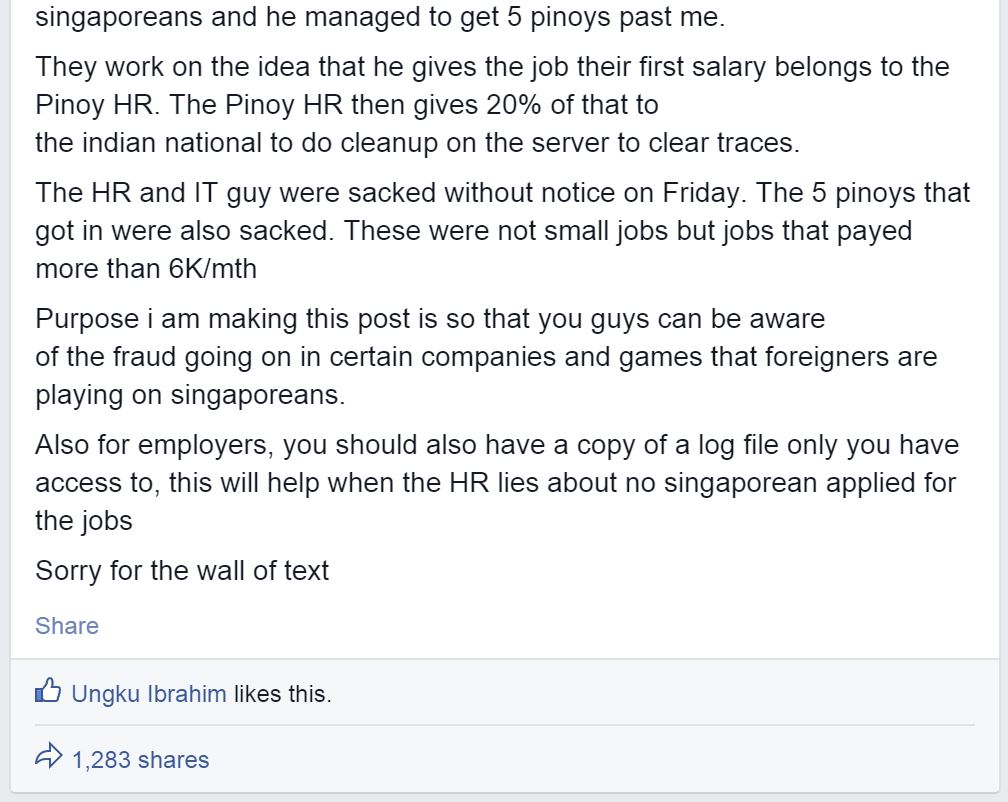 (5th Charge) WHY DOES THE GOVT ALLOW PRC STRIPPER TO COME HERE WORK AND STEAL MY HUSBAND! (Published 22 May 2014)

– "I would like to voice out my unhappiness with the over-populated China Chinese people in Singapore now!"
– "these Chinese women just apply permit/visitor pass using all kind of job excuse"
– "Do you know by simply granting another work permit to these Chinese women means you are destroying many Singapore homes out there!"
– "These Chinese women sleep around with our men … and doesn't care whether the men are married or with kids."
– "they only hopefully the men can divorce & married them and after that apply for S'porean citizenship and dump the guy! "
– "We are flooded with enough Chinese all around us now! and enough is enough!"

This article was a complaint sent in by a TRS reader by email on May 22nd 2014 (we have blanked out the TRS reader's name and email address to protect his identity): 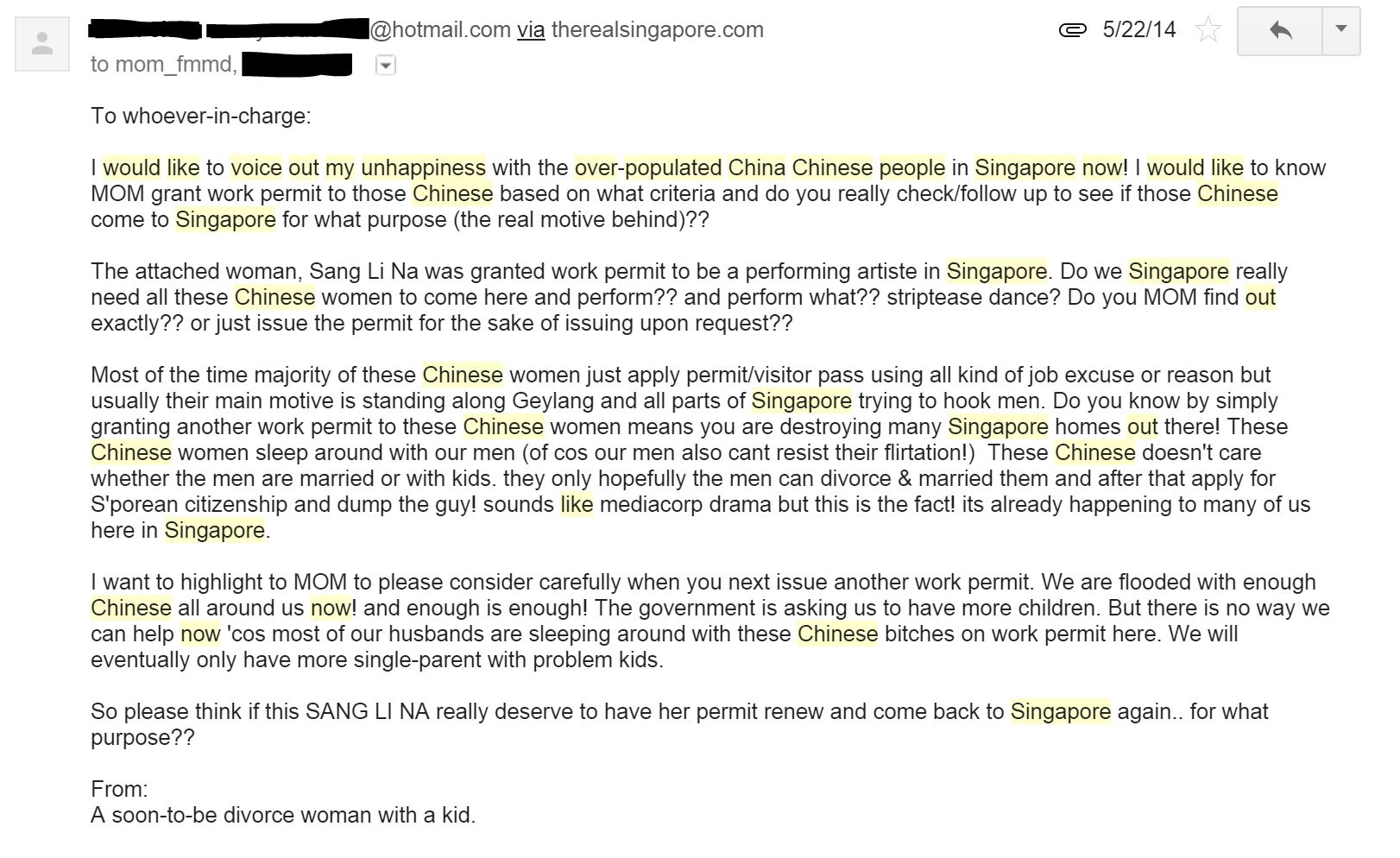 – "I am shocked to see a PRC women pulling down her grandson's pants on the MRT today. She then asked her to pee into the bottle"
– "Is Singapore going back to times where we were uncivilized?"

This was sent in to TRS by a reader who also sent the same complaint to STOMP which also republished the same article inclusive of these allegedly seditious lines:

– "the company hires more foreigners than locals"
– "Have they given fair consideration to Singaporeans?"
– "Our objective is to instil fear in companies and make them think twice before hiring foreigners without really considering our Singaporean workforce. We want to create this mindset by continuing to expose more and more companies that have discriminatory practices towards Singaporeans. – Farhan"

This article was based on the publicly available information of the healthcare company where Alison McElwee the "puppy murderer" worked.

It is understood that both Yang and Takagi refused to comply with this request by Police as they felt it was an unnecessary intrusion on their privacy, especially given the fact that they are being investigated for sedition, which is not a crime which has anything to do with any finances.

They stood by their right to privacy on this matter and are now facing charges for it.

Takagi has been involved in the approval and publication of reader submissions for some of the content posted on TRS.

The couple were arrested on Feb 6th at Mr Yang's grandparents' home. The couple explained that they were in Singapore visiting Mr Yang's hospitalized grandmother.

We understand that Yang has also maintained from the very start and throughout the investigations that he is not involved in any editorial content, finances, or any daily running of TRS. However, there have been some false reports in the mainstream media suggesting Yang's involvement in the website. In particular, there have been reports which have suggested that Yang is involved in the finances of TRS. Some mainstream media reports also suggested that Yang is a dishonest businessman who ran away with $2,000 which he had borrowed from a friend. We understand that these reports are completely fabricated by the reporters and are untrue and the sources quoted by SPH's newspapers are not even real people.

It is understood that Yang is currently also consulting with lawyers separately to take up a civil case against the SPH newspapers and websites over these false and defamatory articles and will proceed once the criminal case is concluded.

The couple have engaged a lawyer for the charges and are believed to be planning to claim trial over the charges.
Share

SDP CHAIRMAN: FUNDAMENTAL RIGHTS OF CITIZENS MUST BE PROTECTED 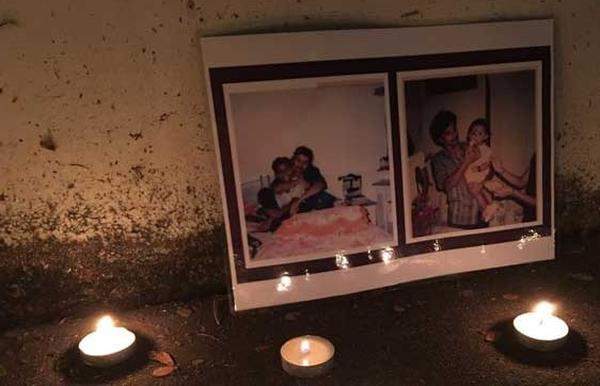 On 21 April 2021, Twitter user @mysweetserenade shared a video where an aunty was seen …