I read disturbing news online saying that a local law firm has been going around sending letters of demand to people who illegally downloaded the Hollywood film Dallas Buyers Club. This is a common practice known as Torrenting, which many Singaporeans use for their entertainment needs.

Based on letters already received by some Singaporeans, the lawyer letter demands that these offenders pay up to S$10,000 for each infringement of copyright. And if you are a multiple offender, you may have to pay up to S$200,000 in copyright damages or even more if they company is deemed to have lost that amount of profits.

What's worse is, infringers are also liable to criminal prosecution which carries a fine ranging from $20,000 – $50,000 and a jail term of between 6 months to 3 years imprisonment. 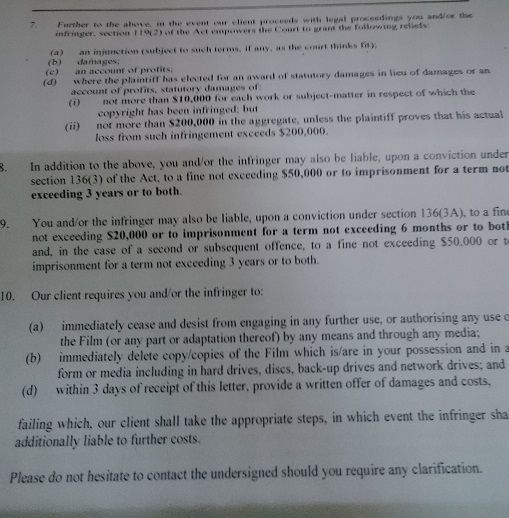 Based on what netters are saying, the law firm is aware of their identity because the three telcos who sell us our internet service have received legal demands to reveal our subscriber information to the law firm representing Dallas Buyers Club.

Till date, M1 and Starhub have been forced to reveal downloader information after a court order was served to them. Singtel is in the midst of contesting the case and has till today refused to give up their customer's private information.

If you are one of those who have downloaded the movie, it would be prudent to stop doing so to prevent any further infringements.

You may also take the following steps to "rectify" the offense. Please publish this to let fellow Singaporeans know the danger and heavy punishment we can face if we torrent movies online.

GE2020: Petition Started for PAP to Apologise for Statement on Raeesah Khan