This morning, as I made my way to work,  there was an air of stillness about me.  Everyone I met, at the bus-stop, in the bus, along the streets were quite quiet and simply trying to go about their usual day, but without uttering a word.  A nation grieved yesterday at the final farewell of its founding Prime Minister Mr Lee Kuan Yew.  So much tears were shed as the cortege journeyed through the streets of Singapore, lined with thousands of people.  Today, I feel an air of emptimess and lingering sadness.  The nation moves on, never forgetting a legacy left behind by an extraordinary leader.

Everyone had been discussing his passing throughout the week of national mourning.  I have got friends and colleagues who queued for hours in the sun, just to bid their final farewell in person where the body was lying in state at the Parliament house. My entire Facebook timeline was plastered with newsfeeds about the man and the legacy he had  left behind.  However, all this while, I kept quite silent because I approached the entire issue with ambivalence.  I needed time to step back and recalibrate my thoughts about the man, having lived through an era when my own family was impacted by  some of his more autocratic policies.

I thought it was time to come clean and write this blog post about how I truly felt, without disrespect to my own father.

In 1978, I saw Dad handcuffed and led into our home by a team of officers from the Internal Security Department.  I was 8 years old.  And the entire episode unfolded before me like an extremely bad B-grade movie that did not seem to have a proper beginning or an ending.  The sketchy storyline went like this for an 8 year old.  Dad was involved in “political discussions” with a group of lawyers who took a pro-Communist stand.  He had to be punished for having an opinion that was not aligned to our government’s stand.  He then spent months incarcerated behind that famous big blue gate at Thomson road which was where my Dad and his bunch of friends were detained under the Internal Security Act.

I remembered the months that ensued were a flurry of activities, where my Mum was trying to hysterically make sense of what had happened.  I was the fire-cracker in the family and I went through a phase of childhood rebellion attempting to re-enact Guy Fawke’s Day with my marbles at any government officials that I had come across during those months.  I was trying to “protect” Mom.   I remembered Mom attempting to keep the family together, so she marched up to Dad’s boss at that time, the late Mr Khoo Teck Puat and said, “Bock Chuan had worked for you with such selfless commitment and treated you like his other father.  The most compassionate thing you can do as his boss, is to keep that job for him, and wait for his release from political detention.  Meanwhile, please continue to transfer his salary into his bank account so that his family can get by.”  Mr Khoo did just that, and I would be eternally grateful to him for that.

Meanwhile, Mom and I struggled by without Dad.  Mom suffered from hallucinations and I was subjected to the cruel talk amongst schoolmates who pointed their fingers at me while whispering, “Her father is in jail you know? So terrible.”  The cruelest thing that had happened for me then was having thoughtless journalists camp out at our gates to take statements from Mum and I.

One day, there was a live telecast of Mr Lee Kuan Yew on TV getting a public confession from the political detainees including Dad. A journalist visited Mum and I and made us sit next to the TV.  I could not remember much of that apart from waking up the next day with a picture of myself in my pyjamas, and a quote from an 8 year old me saying, “Daddy was very naughty.”  Looking back, that was probably the beginning of my training as a Communications and PR professional.  I never trusted the media ever since, and I hated the establishment even more for turning my family’s life into a circus.  I grew up bearing that anger in my heart.

However, living through the last 4 decades where I saw how Singapore had evolved to what it has become today, where there are roofs over our heads, we feel safe when we walk the streets and  our children have a  good head-start in life with sound education, and the medical bills of our ageing population is heavily subsidized,  I realized that Mr Lee had to do what he had to do at that time for the good of our nation.  Sure, some of his policies were unpopular and my family was a victim of it, but as a child of Singapore having lived through the economic growth  and political stability of the 70s through to today when I see my parents enjoying the benefits of the Pioneer Generation package, I cannot help but have to admit that the man had truly done a great job.

Doing What He Had To Do

Even he admitted, “I stand by my record. I did some sharp things to get things right – too harsh – but a lot was at stake. But at the end of the day, what have I got? Just a successful Singapore.”  For a nation that went from survival instincts to protecting its economic and political security, this man would do anything for it.  As he had declared, ‘Because my posture, my response has been such that nobody doubts that if you take me on, I will put on knuckle-dusters and catch you in a cul de sac…Anybody who decides to take me on needs to put on knuckle dusters. If you think you can hurt me more than I can hurt you, try.”   Sure,  some of his decisions were tough, but my Dad would have made the same decisions if he was in the shoes of Mr Lee.  Ultimately, when he gave his entire life for nation building, he was in it for the nation and its people, not himself.  He said, “"I have never been over-concerned or obsessed with opinion polls or popularity polls. I think a leader who is, is a weak leader. If you are concerned with whether your rating will go up or down, then you are not a leader. You are just catching the wind … you will go where the wind is blowing. And that's not what I am in this for."

I asked Mom if Dad had tuned to the TV channels to watch the crowd lining up to pay their last respects as the body was lying in state at Parliament House. To my surprise, she answered, “ Yes he did, and he even cried. I think after all these years, all is forgiven and forgotten and Dad has seen the good that the man had done for Singapore.”

That was all I needed to hear, so that it gave me that go-ahead to write this blogpost.

When I saw Prime Minister Lee Hsien Loong giving his eulogy to the “Papa” that he loved so dearly, I was reminded that our late founding Prime Minister, was someone else’s father too. So yes, I spent much of my younger years hating the man, but as I grew up, my emotions grew up with me.  I am still my father's daughter and I love and respect him for having boldly taken a stand no matter the risks involved, standing by what he had believed in then.  However, I am also my nation's daughter and I respect Mr Lee for also having boldly taken a stand, no matter how many had felt about him then. He too, stood by what he had believed in.

Without any disrespect to my father, and with every respect to the late Mr Lee Kuan Yew,  I am eternally grateful for his efforts in turning this country into a safe haven for my family and I.

The writer of this blog post is a Marketing and PR professional for over 20 years.  Due to her love for Mixed Martial Arts (MMA), she is also a freelance sports writer on the side, contributing MMA-related articles to several sports media.  She works in partnership with her husband, David Ash, who is an avid sports photographer from www.singaporemaven.com.  She is passionate about Muay Thai and nurtures a dream to fight competitively one day when her coach stops making fun of her.  She is also a psychic intuitive by birth and runs a consultancy that does tarot and numerology readings under her brand, Sun Goddess Tarot.  This blog is affectionately called "The Crazy AngMo" as she is married to one, although she has not yet explained to THE Ang Mo that when translated, he has been labeled  “the bloke with ginger hair”. 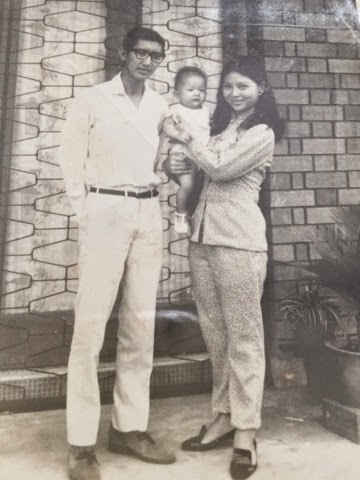