CHERIAN GEORGE: LEE KUAN YEW WAS A BULWARK FOR MINORITIES IN S’PORE

Unlike-Lee admirers around the world may be missing significant details.

In an amusing case of mistaken identity, a banner honouring Lee Kuan Yew has appeared in India, bearing a photo of another Singaporean elder statesman, President Tony Tan. Both are white-haired ethnic Chinese males, but Tan, as you have may noted from Channel NewsAsia’s coverage of Lee’s funeral today, is rather more alive.

The picture has been making the rounds on social media in Singapore, bringing smiles to an otherwise sombre day. It serves as a useful reality check for Singaporeans, that although Lee has been lauded by world leaders as a 20th century giant, not everyone can recognise him from Tom, Dick or Tony.

Some other cases of mistaken identity are less trivial. It’s nothing new. For at least a couple of decades, he has been all things to all men who aspire to a certain kind of leadership. They see in him a model, a kind of proof-of-concept that they can point to when defending their own missions and methods. Leader X is Country A’s Lee Kuan Yew. How often have you heard that line.

As a Singaporean born in the year of the republic’s independence, I’ve benefited from Lee’s global brand, most tangibly in the fact that my red passport travels extremely well. But the way that brand is sometimes used is cringeworthy.

Most of the parallels that foreign politicians and their acolytes draw with Lee Kuan Yew are selective and self-serving. His name is evoked by anyone who wants to apply less-than-democratic means in the name of strong, decisive leadership in order to achieve high economic growth. But there was a lot more to the man and his formula for success. 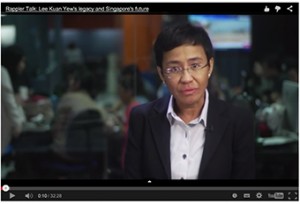 My interview with Maria Ressa of Rappler.com.

The most obvious was the zero tolerance of corruption that he embodied and instituted in the Singapore system. That is probably a chapter in his bestselling memoirs that admirers like former Thai prime minister Thaksin Shinawatra skipped. Similarly, fans of Indonesia’s late president Suharto who cite his friendship with Lee conveniently ignore the fact that Suharto topped the world league table of corrupt leaders, according to the same organisation that routinely names Singapore as the cleanest in Asia.

Less noticed is the fact that Lee, while loudly dismissive of the liberal brand of democracy, never deviated from electoral authoritarianism – the belief that regular multi-party elections are ultimately the only way for a government to win legitimacy, and are not bad at keeping a dominant party on its toes. Of course, he did his best to insulate his government from distractions like short-term public opinion, an adversarial press and protest movements; he also treated the opposition unfairly, to put it mildly.

But, to this day, elections in Singapore remain competitive enough and credible enough to make democracy “the only game in town”, as political scientists would put it. As a result, opponents of the regime plot election strategy, not extra-parliamentary struggle; and Singaporeans accept the government’s authority as legitimate, even if they disagree with its policies. The thousands of Chinese officials who pass through Singapore to learn the Lee model may think this lesson can’t apply to the People’s Republic, but shouldn’t overlook how important it has been to Singapore’s success.

Back to India. When its government decided to fly the tricolour at half-mast today, I wonder which Lee they were honouring. I hope – but I doubt – that it was the leader who stood resolutely against sectarian politics and majority domination. Among all his core principles, this is the one least talked about abroad. Yet, to minorities like me – and, thankfully, most members of the majority race as well – this may be the single most precious aspect of the legacy.

Not that he got everything right. Older Indian Singaporeans still bristle at the way he labelled us as “fractious and contentious”. The stereotype might not have been off the mark (note Amartya Sen’s Argumentative Indian thesis), but if only he had seen it as a positive contribution to Singapore’s national culture rather than a weakness. Similarly, his open suspicion of Muslim Singaporeans’ growing religiosity was hurtful. Some of such straight-talking about race and religion could come back to haunt Singapore, should future bigots exploit his words to justify their prejudices.

But minorities never needed to doubt this: Lee was an unshakeable bulwark against majoritarian tendencies that could have easily overwhelmed Singapore. Malay/Muslims make up only 15% and Indians 7% of the population. For decades, the risk of a Chinese chauvinist party playing the race/language card posed the single biggest threat to PAP dominance. This fact is lost on most of the Western press, who self-aggrandisingly like to believe that they were Lee’s bête noire. They were more like sparring partners, compared with champions of the Chinese-speaking ground, who were the main victims of both detentions without trial as well as flagrant censorship.

Lee went to the extent of amending the republic’s Constitution to stop any party from sweeping into power without minority support. For most Parliamentary seats, candidates are forced to contest as small teams that must include minorities. Thus, no Chinese party could do in Singapore what the BJP did in India last year – come to power without a single MP from the country’s largest minority group.

Thankfully, Lee and his comrades were influenced by an older Indian tradition, the Nehruvian secular ideal that accommodated minorities – the same tradition that the BJP and the larger Hindutva movement is bent on dismantling.

Singapore should not presume that it can serve as a model for any other country, least of all India. The world’s largest democracy is 200 times larger than the city state that Lee ran, and its challenges are profoundly more complex.

But if foreigners do choose to honour Lee Kuan Yew, they shouldn’t fall into the mistaken-identity trap. Yes, he was a firm leader who stretched the limits of democratic government to breaking point in order to get things done.

But a leader who makes minorities feel unwanted, insecure and fearful?

That’s not a face that Singaporeans recognise.